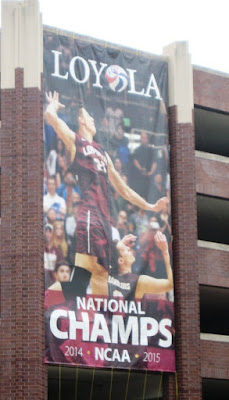 I'm two months late in writing about the NCAA men's final, but an unintended benefit of the delay is that I was able to take the picture to the right, on the Loyola campus during a late-June trip to Chicago. Notice at the bottom of the three-story banner (displayed on a parking structure) that it lists both the Ramblers' 2014 and 2015 titles.

This year's championship was a lot harder to come by than last year's, though, as Loyola captured a marathon fifth game over in-state rival Lewis for the 2015 crown, as opposed to a relatively easy four-game victory over Stanford in 2014.

As shown in the chart below (which I created from the play-by-play sheet), Loyola didn't win until its eighth match point of Game 5 (and the Ramblers also had two match points in Game 4). Lewis had three match points of its own in Game 5.

The NCAA final was the fourth Loyola-Lewis meeting of the season, with the Flyers taking both regular-season match-ups by 3-1 scores, and the Ramblers capturing the MIVA conference final, also by 3-1. The following graph shows the two teams' hitting percentages in the four matches. 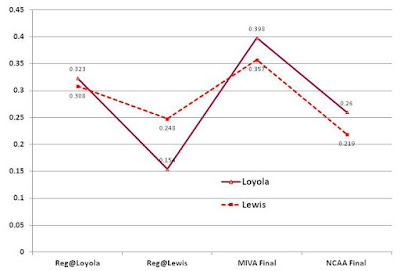 The nature of the four matches appeared to vary considerably, with offensive firepower having the upper hand in the MIVA tournament final and the NCAA final featuring a defensive battle.

In both of these matches, though, the Ramblers outhit the Flyers by slight margins. Loyola outblocked Lewis 20.5-13.5 in the NCAA final.
at July 05, 2015 No comments: 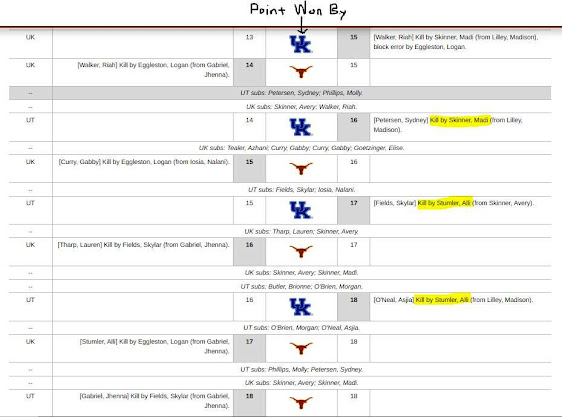