September 06, 2012
I am pleased to announce a major new development here at VolleyMetrics, involving a faculty-athletics collaboration at Texas Tech University. Head Coach Don Flora and Assistant Coach Jojit Coronel have agreed to share with me the team's internal statistical data, which are recorded with Data Volley software.

Today, I will present my first statistical analysis of these data. At this point, the Red Raiders have completed roughly half of their non-conference schedule, compiling a perfect 8-0 record thus far. On Tuesday, the Raider coaches sent me a batch of printouts. Each printout covers one match. I see one of my roles, therefore, as testing for trends across multiple matches. Although each printout contains information on Texas Tech and the team's opponent, I am only using data on the Red Raiders today.

For starters, I will examine the side-out rates and points won on serve for each of Texas Tech's six rotations on the court, to see if there are any noteworthy statistical patterns after eight matches. In Rotations 1, 2, and 3, the setter is in the back row (right, center, and left), giving the team three hitters up front. When the setter is in the front row (Rotations 4, 5, and 6), the team only has two hitters. Having three available hitters presumably is more advantageous than having two, in terms of offensive options and greater potential to keep the blockers guessing. Coach Coronel suggested an alternative line of argument to me, however. Three hitters can lead to a "cluttered" front row, with each having less room to maneuver.

Back in 2009, I attempted to compare the effectiveness of Texas Tech's six rotations in the team's home match vs. Texas A&M, compiling statistics myself from the stands. That analysis obviously included a lot less data than what I have available this season, but some readers may be interested in the diagrams I created back then of the players in each rotation (click here for my 2009 analysis).

With these ideas in mind, I used the 2012 data to look first at the average side-out rates of the six rotations. These mean levels are shown in the following graph as red circles. 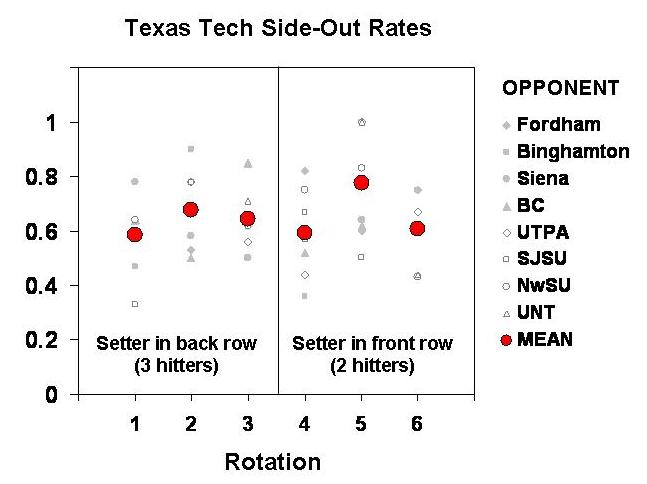 As can be seen, Rotation 5 achieved the highest side-out rate of the rotations (77%), whereas most of the other rotations' side-out rates were around 60%, give or take a few percentage points. However, as shown via the little grey shapes above and below each red circle, each rotation's success at siding-out showed a great deal of scatter across the team's matches. Due to this scatter and the small number of matches, the differences between the six means were not statistically significant. However, as data from more matches pour in, we'll see if Rotation 5 continues to side-out the best.

The other statistic I examined is the counterpart to siding-out, namely how proficiently the team wins points on its own serve in the different rotations. Of course, if whoever serves in a given rotation is a great server and the team garners a sizable share of points through aces or serves that take the opponent out of its offense, the location of the other players in the rotation doesn't really matter. On all other plays, however, the rotation could well matter (e.g., who is in the front row to try to block the opponent's attack).

The mean percentages of points won on Texas Tech's own serve in Rotations 1 through 6, respectively, across the eight matches, are as follows: 44%, 38%, 45%, 53%, 38%, and 50%. Again, there are no statistically significant differences between these values. On a purely descriptive basis, however, Rotation 5 was the team's least effective when serving, in contrast to its performance on serve-receipt.

Over the next few weeks, I'll be presenting additional new analyses from Texas Tech's first eight matches. Then, as I receive new sets of printouts, I'll analyze those. I hope you'll enjoy this exciting new feature on VolleyMetrics.