November 23, 2012
Defending NCAA champion UCLA hosts USC in the Bruins' regular-season finale tonight, marking the final pre-tournament home appearance for UCLA seniors Rachael Kidder, Tabi Love, and Bojana Todorovic. Outside hitters Kidder and Love have been the mainstays of the UCLA offense. Accordingly, I decided to examine the Bruins' win-loss records this season when Kidder alone, Love alone, both of them, or neither of them had strong hitting nights.

I chose a .300 hitting percentage to define "strong" hitting. Volleyball announcers often make an analogy to baseball hitting, saying that a .300 average in either sport is a sign of success. Also, using .300 as the dividing line breaks UCLA's 28 matches into mostly equal-sized groups. My analysis is summarized in the following graph, on which you can click to enlarge. 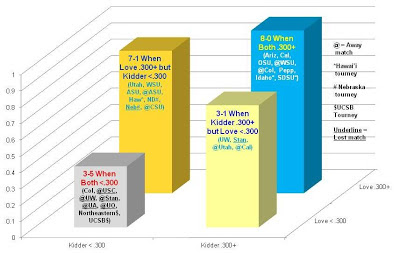 The blue bar shows that when Kidder and Love both hit .300 or better in the same match, the Bruins are a perfect 8-0 (1.000 winning percentage). The only problem is that none of these matches were against elite opponents in the Pac 12 (Stanford, USC, Washington, or Oregon). The success in these matches of Kidder, Love, and the team as a whole may thus reflect relatively weak opposition.

The orange-yellow bar tells us that the Bruins were 7-1 (.875) when Love (but not Kidder) hit in the .300s or above. These matches include a win at Hawai'i and a narrow loss at Nebraska.

The pale-yellow bar reveals that when Kidder (but not Love) reached or exceeded .300, UCLA was 3-1 (.750). This batch includes the Bruins' lone win (thus far) against an elite conference opponent (vs. Washington, in Los Angeles) and a narrow loss at Stanford.

Finally, the grey bar shows that when Kidder and Love both hit below .300, the Bruins are 3-5 (.375). More ominously for UCLA, the three wins in this category all came against lesser competition (Colorado, Northeastern, and UC Santa Barbara). The five losses, on the other hand, were all against top Pac 12 opposition on the road.

As the Bruins take on USC tonight and then move on to the NCAA tourney, UCLA's coaches and fans naturally will want Kidder, Love, and all their teammates to hit as effectively as possible. However, last year's Bruin squad showed that stellar hitting percentages from Kidder and Love were not essential for winning a national championship. In UCLA's NCAA final win over Illinois, Love hit .294 (14 kills and 4 errors in 34 attempts) and Kidder hit .127 (20-11-71). The Bruins hit only .218 overall, but held the Illini to a .215 hitting percentage.