December 12, 2012
The NCAA women's Final Four begins Thursday night, with Michigan facing Texas, followed by Penn State taking on Oregon. To preview the Final Four, I've decided to look back on each team's victory in the Elite Eight. To begin, for each of the victorious teams, let's look at the result of every spike attempted in its respective Elite Eight match (you may click on the following graphics to enlarge them). Box scores for the matches are available at the following links: Penn State-Minnesota, Oregon-Nebraska, Texas-USC, and Michigan-Stanford.

Let's walk through the first case, to illustrate the format. Penn State attempted 156 spikes vs. Minnesota. Sixty-two of these attempts (39.7%) were successful, resulting in kills. Outcomes depicted in black (or dark blue, later) are good. Twenty-five Nittany Lion attacks resulted in hitting errors, 14 (9%) because they were blocked right back onto the Penn State side of the floor for immediate Gopher points and 11 (7%) because Penn State hit the ball out-of-bound or never cleared the net. These bad outcomes for Penn State are depicted in red and purple, respectively. Minnesota dug up 61 (39.1%) of Penn State's spike attempts, and the remaining 8 (5%) are designated as "Other" (e.g., Minnesota blocking the ball back, but Penn State keeping it in play). 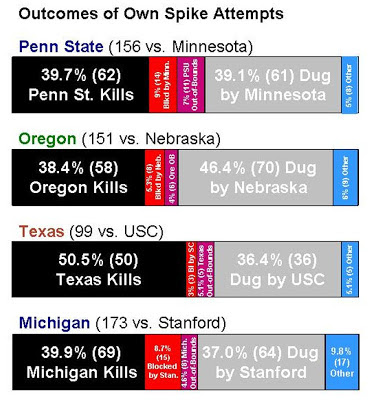 Looking at the four horizontal bars, it is clear that Texas (who played USC in its regional final) did the best of any Final Four team at putting the ball away for kills (50.5% of the time, with no other team reaching 40%). There is no way to know for sure whether the four losing teams in the Elite Eight (Minnesota, Nebraska, USC, and Stanford) were equally good defensively, so comparing the hitting statistics of Penn State, Oregon, Texas, and Michigan must be done with caution. Still, it must be noted that USC features Natalie Hagglund, one of the top diggers in the the country (here and here), so it's not like the Longhorns faced a weak opponent in the backcourt.

Oregon had nearly half (46.4%) of its attack attempts dug up by Nebraska, the highest such percent among the Final Four teams. Penn State, Oregon's Thursday opponent, is probably a little better digging team than Nebraska (see Big 10 rankings in statistical categories), so the Ducks may struggle somewhat to put balls away. Penn State (9%) and Michigan (8.7%) exhibited the greatest proneness to getting their spikes blocked.

That Michigan took 173 swings against Stanford shows what a grind-it-out team the Wolverines are. To control for match length, let's note that there were 180 total points in the match (20-25, 25-20, 25-20, 25-20). The Wolverines thus took nearly one hitting attempt for each point played (173/180 = .96). Because many rallies don't have any spike attempts (e.g., aces, free balls), Michigan would thus have taken multiple swings on many plays. The swings/total points ratios for the other teams are as follows:
As seen, none of the other Final Four teams played as swing-intensive a match in the Elite Eight as Michigan. By comparison, Texas hardly tired out its arms at all.

Next, let's look at how the Final Four teams did defensively, focusing on how all of the opponents' spike attempts turned out. 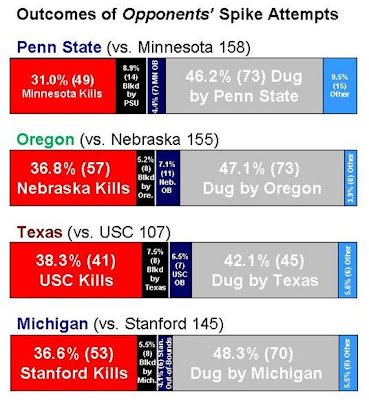 Penn State was best at minimizing the percent of opponent spike attempts that yielded kills, as only 49 (31%) of Minnesota's swings bore immediate fruit (remember, red is bad, so the bigger the red bands, the worse the defense). Texas allowed 38.3% of USC's swings to go for kills, in part because the Longhorns dug a relatively small percent (42.1) of Trojan attempts.

Whether tomorrow night's matches will follow the scripts suggested by the above analyses -- Michigan trying to keep the ball alive on Texas's big swings off the high outside sets and the Wolverines scrapping for points on offense, and Penn State likewise digging up Oregon's attacks -- remains to be seen.  If nothing else, I hope these analyses provide viewers with something to think about during the matches.