December 08, 2012
A tournament in which favored teams overwhelmingly prevail is known, via an expression from horse racing, as following the "chalk." This year's NCAA women's competition is definitely looking like a chalk tournament, as all but one of the eight remaining teams after last night's Sweet 16 round is a top-eight seed. Today's match-ups thus include the following (see bracket for starting times):

If one delves further into the statistics of the second match, however, there are some bright spots for the Gophers. Minnesota actually outhit (.207-.204) and outblocked (16-9) Penn State. The Nittany Lions' advantages seemed to come from two other areas. Penn State dug 72 of Minnesota's 121 non-error spike attempts (59.5%), whereas the Gophers dug only 49 of the Lions' 125 non-error attacks (39.2%). Also, Penn State's balance of service aces (11) and errors (12), though negative, was nevertheless more favorable than Minnesota's (5 and 10).

Tonight's rematch features a great coaching match-up, with Penn State's veteran mentor Russ Rose going against new Minnesota coach Hugh McCutcheon, of Olympic coaching fame. McCutcheon definitely has Minnesota on the right track after a tough stretch in early November. Since losing both matches November 9-10 on a swing through Michigan State and Michigan, the Gophers have won seven in a row. The most notable wins during this streak include a home conference match against Nebraska and last night's tight four-game win vs. Big 10 rival Purdue on the Boilermakers' home court (game-by-game log). As shown in the following chart (on which you can click to enlarge), some hot hitting appears to be fueling the Gophers' resurgence. 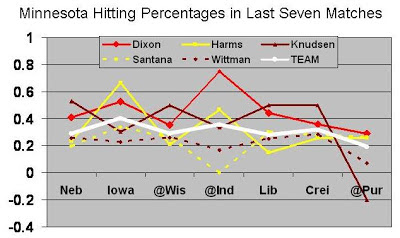 Yesterday's Minneapolis Star Tribune had a feature article on  middle blocker Dana Knudsen and setter Alexandra Palmer, who both transferred from Santa Clara to join the Gophers this season. Knudsen's hitting, as shown above, has consistently been around .400 of late, with the obvious exception of last night's Purdue match. Fellow middle Tori Dixon has also been pummeling the ball.

The Penn State-Minnesota contest is the only one of today's four matches that can really be said to be taking place on a neutral court, as Purdue is hosting this regional.

No. 2 Stanford vs. unseeded Michigan

Tonight represents the third NCAA-tournament meeting between the Cardinal and Wolverines in four years, with Michigan winning on Stanford's home court in 2011 and 2009. The location for tonight's match is slightly different, Berkeley instead of Palo Alto. The way Stanford is currently playing, Michigan will obviously have a tall order this time.

The Cardinal got a big hitting performance from frosh outside hitter Jordan Burgess (16 kills and only 3 errors on 29 attempts, for a .448 percentage) in sweeping Iowa State last night. Fellow frosh outside Brittany Howard didn't do too badly either (8-0-27, .296). The strong hitting of Burgess and Howard will likely prevent opponents from focusing their block too heavily on Stanford's middle hitters, Carly Wopat (.250 last night) and Inky Ajanaku (yet another frosh; .312 last night). Hitting diagrams I compiled on Stanford earlier this season are available here and here.

Up until last night's win over conference rival Michigan State in three, Michigan had recently been riding the improved hitting of OH Molly Toon. Last night, however, Toon was off-key with a -.048 hitting percentage. MB Jennifer Cross, who has arguably been the Wolverines' steadiest hitter this season, came up big last night, ripping the Spartans for a .500 percentage (12-1-22). Earlier this week, Michigan coach Mark Rosen appeared on Internet radio's "The Net Live" (see link in right-hand column for archives of the show). He characterized Lexi Erwin as a workhorse type of hitter, who is not a kill machine, but produces well over the long haul. Erwin fit exactly that profile last night, hitting .234 on a match-leading 47 attempts.

The conventional wisdom on this match between the host Longhorns and visiting Trojans, as discussed on The Net Live and elsewhere, is two-fold:
Bricio has led the Trojans in hitting attempts this season with 1,294, outdistancing the next closest player, right-side hitter Katie Fuller, by more than 300 swings. Bricio's season-long .244 hitting percentage may not look spectacular, but is pretty good considering how often she hits. My hitting diagrams on USC are available here and here. The digging of junior libero Natalie Hagglund has also been a major part of the Trojans' success this season.

In addition to Eckerman, recently named Big 12 Player of the Year, and Webster, another Texas stalwart is MB Khat Bell, who suffered a season-ending knee injury last year. Longhorn coach Jerritt Elliott has been resting Bell periodically this season, presumably to avoid re-aggravating the knee, so she should be in good shape for tonight.

Finally, we have Oregon taking on Nebraska in Omaha. Needless to say, the Cornhuskers appear to have recovered from a mid-season slump, last night sweeping a Washington squad that was ranked No. 2 in the nation earlier this season and owned wins over USC, UCLA, and Oregon. Scores were 25-14, 25-21, 25-23.

BYU had come out fourth (behind only Penn State, Texas, and Stanford) on my Conference-Adjusted Combined Offensive-Defensive (CACOD) ranking at the end of the season, so I thought an upset over Oregon might be possible. However, the Ducks were too strong.