It's Penn State and Cal in Saturday Night's Final

December 17, 2010
Below, I've circled what I think are some key numbers from last night's two NCAA women's semifinal matches (I did screen captures of the official box scores, then annotated them in PowerPoint). One thing that's clear right off the bat is that the two winning teams, Penn State and Cal, each sided-out extremely well. With those kinds of side-out percentages, teams will very rarely lose games (sets).

In my Penn State-Texas preview, I had concluded that, "Blocking may provide Penn State with a decisive edge in holding down Texas's hitting effectiveness." I don't often make such spot-on predictions, so when I do, I like to toot my own horn a little. As seen in the following boxscore, the Nittany Lions dominated the blocking and slowed down two Longhorn hitters who had been very productive of late, Rachael Adams and Jennifer Doris. Throw in a torrid hitting performance from Penn State's Deja McClendon and a three-game romp is the result. (You may click on the images to enlarge them.) 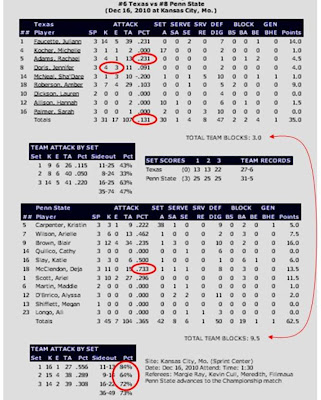 Similarly, Cal accomplished what I thought it needed to, in order to finally break through and beat USC this season. Adrienne Gehan, who struggled mightily in both Bear-Trojan matches during Pac-10 play, recorded a .393 hitting percentage last night, complementing Bear star Tarah Murrey (.413). Defensively, Cal slowed down nearly the whole SC team, but especially middle blockers Alexis Olgard and Lauren Williams, who had punished the Bears in the the teams' earlier meetings. Alex Jupiter never aligned with Mars (a music lyric reference) nor with Trojan setter Kendall Bateman very much, for that matter. 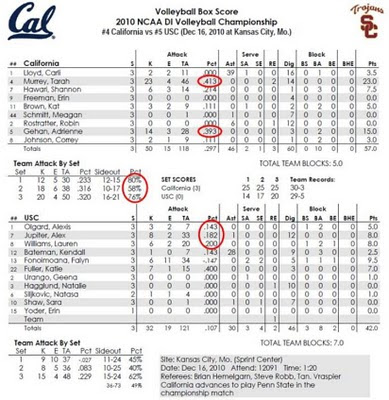 So, who wins the final? Both teams have been dominant in the postseason, dropping only one game combined (Penn State vs. Duke). Cal has faced tougher competition, including having to play Washington in the Seattle regional. Still, one can never count out Penn State. The old football cliche about teams that "don't rebuild, they reload" seems quite applicable to the Lions. I'll predict a five-game match and leave it at that...

HUSKY-LEADER said…
Regarding the Penn State-Texas match. It seems likely that poor serve receive was the more likely culprit in the loss.

Blocking is not an indicator of success in the women's game. Correlation is not causation. The digging statistics could have had an effect, but since there is no statistics on creates vs. converts for the digs we'd never be able to tell for sure. I do see the gap in service aces as well as the poor side-out ratios from Texas (33%, 43%, and 63%) as a HUGE reason for Texas's loss to Penn-State. After all, if you cannot pass in-system, you make it very easy for your opponent to win the match.
April 27, 2011 at 9:53 AM