December 16, 2010
Tonight's second semifinal match of the NCAA women's Final Four will be an all-Pac-10 battle, with the University of Southern California (USC) taking on the University of California, Berkeley. What gives this match a little extra intrigue is that these teams have already met twice this season in conference play, with USC winning both times. The Trojans actually had a harder time holding off the Golden Bears -- 17-15 in the fifth game -- October 9 in Los Angeles (boxscore) than up in Berkeley, where USC prevailed in four games (boxscore).

As usual, I've been focusing a lot on hitting percentage during the tournament, and the following table tells us which players have (and have not) done well in this season's USC-Cal head-to-head match-ups. 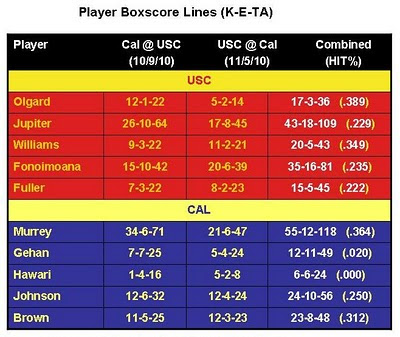 As discussed in yesterday's preview of tonight's other semifinal between Penn State and Texas, middle blockers will often have higher hitting percentages than outside hitters, because the latter likely receive a greater number of impromptu, desperation sets when a team is out of system. Having said that, though, USC's two giant middle blockers, Alexis Olgard (6-foot-5) and Lauren Williams (6-4, a third-team All-America), have attacked extraordinarily well against Cal this season, with hitting percentages of .389 and .349, respectively.

On the other hand, the Trojans' outside-hitting corps, led by first team AVCA All-America Alex Jupiter, has been held in check against Cal. As can be seen above, Jupiter, Falyn Fonoimoana, and Katie Fuller have all hit in the range of .222-.235 in the two matches against the Golden Bears. One important task for Trojan setter Kendall Bateman, a second-team All-America, will therefore be to get her outside hitters going.


Cal OH Tarah Murrey, powered by her fellow Cal first-team All-America, setter Carli Lloyd, has overcome any difficulties outside hitters have in recording high hitting percentages, going .364 in the Bears' two matches against the Trojans.
Middle blocker Kat Brown has held her own against SC, hitting .312, while opposite hitter Correy Johnson, an honorable mention for All-America honors, has hit .250. Adrienne Gehan (OH/opposite) and Shannon Hawari (middle) have been almost totally neutralized by USC, compiling virtually as many hitting errors as successful kills.
So there you have what I think are the key questions for tonight. Can the Golden Bears limit the damage from the Trojans' middle blockers, while still keeping the SC outside hitters under wraps? And can Tarah Murrey get a little help from her friends, as Cal tries to match SC offensively?