December 15, 2010
The first of Thursday night's two NCAA women's national semifinal matches presents a rematch of last year's championship contest, Penn State vs. Texas. The nightcap will feature two Pac-10 foes, USC and Cal. The present write-up will focus on Penn State and Texas, with another one tomorrow for USC and Cal.

My starting point in analyzing the Nittany Lions and Longhorns is to examine to what degree, if any, the teams have changed over the past three months in their allocation of sets to different hitters and these players' hitting percentages. Back in early September, on the eve of the Big Four tournament -- with Florida hosting Penn State, Texas, and Stanford -- I presented graphs of each team's leading hitters.

The key elements of these graphs are as follows. Each team gets its own graph. The graph consists of several bars, one for each hitter. A bar's height represents that player's hitting percentage (based on some reference timeframe) and its width represents the player's share of the team's hitting attempts. For convenience, a given team's bars are arranged, left to right, from the player with the highest hitting percentage to the one with the lowest. One wants to see rectangles that are both tall and wide, signifying that players with high hitting percentages are taking the most attempts.

What we're going to see is a comparison of "old" and "new." The old graphs are the ones from September, based on matches prior to the Florida tournament. The new ones are based on teams' statistics from the first four rounds of this year's NCAA tourney, the four matches a team won to reach the Final Four.

To create the new graphs, we of course have to look at each team's tournament matches, one-by-one, before aggregating the statistics. In the first table immediately below, we see the statistical hitting lines (kills, errors, and total attempts) for each of Texas's and Penn State's main hitters, match-by-match. Together, the five listed Longhorn players accounted for 95.4% of UT's spike attempts in the first four rounds of the NCAA tournament, whereas the listed Lion players accounted for 86.5% of Penn State's spike attempts. As always, you can click on the graphics to enlarge them. 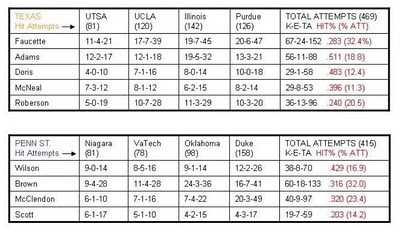 One Texas player immediately jumps out at me, namely middle-blocker Jennifer Doris, who has only one hitting error in the entire postseason (on 58 hitting attempts). In the regionals, Doris had 8 kills and no errors in 14 swings against Illinois, and 10 kills with no errors in 18 attempts against Purdue. I'll discuss Doris and other Longhorn hitters further when I get to the team's graph (below).

Among the Nittany Lions in their table, middle-blocker Arielle Wilson has performed well in most of the team's tournament matches, outside-hitter Blair Brown (who hits on the right-hand side, in contrast to most prominent OH's) excelled vs. Oklahoma, and OH Deja McClendon exhibited her most sustained productivity against Duke.

Let's now look at the graphs. The larger (light-orange) graph represents Texas in the current postseason, with the September graph (smaller, burnt-orange) shown for comparison. 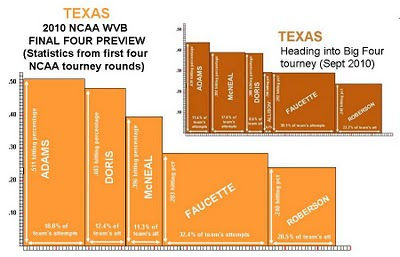 Middle-blocker Rachael Adams, who was just named first-team All-America by the American Volleyball Coaches Association (AVCA), comes out as the Longhorns' highest-percentage hitter in both graphs. In what seems like a wise move (as seen by Adams's light-orange bar being wider than her burnt-orange one), UT has increased Adams's share of the team's spike attempts, from 11.6 percent in September to 18.8 percent presently.

Sha'Dare McNeal has seen her proportion of Longhorn hit attempts shrink from 17.0 to 11.3 percent, perhaps as a way of increasing Doris's swings (from 8.6 to 12.4 percent). Of course, I have no way to know if such changes are intentional or just coincidental.

Juliann Faucette (OH), who has taken about one-third of UT's swings in the postseason, joined Adams on the AVCA All-America first team. Faucette's hitting percentage is lower than those of her aforementioned teammates; however, as an outside hitter, she may be called upon to take a greater number of improvised swings to bail the team out of danger, in contrast to middle-blockers whose quick attempts tend to be by design. (See my earlier posting on out-of-system play and the related commentary on VolleyTalk.)

For Penn State, the larger (lighter-blue) graph shows the current postseason, whereas the smaller (dark-blue) graph is from September. 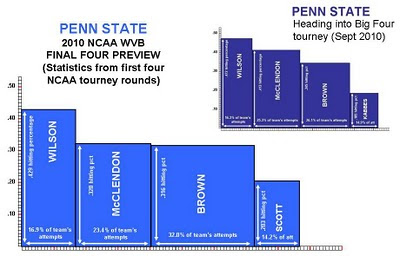 The Nittany Lions have featured a "big-three" attack this season, with the aforementioned Wilson, Brown, and McClendon. All three also received AVCA All-America honors, with Wilson and Brown making the first team and McClendon, the second (also being voted Freshman of the Year). Other than somewhat of a shift from September from when McClendon and Brown took about the same share of Penn State's hit attempts to the postseason, where Brown has been getting more attempts than McClendon, the Nittany Lion offense looks structurally pretty similar at the two stages of the season.

Blocking may provide Penn State with a decisive edge in holding down Texas's hitting effectiveness. I've gone on for a long time, but let me just conclude with the observation that Penn State ranks fifth in the nation in blocks per set, whereas Texas is 35th.