The women's volleyball team at Texas Tech University, where I'm on the faculty, just finished a Big 12 season that seems hard to describe as anything other than a disaster. After winning their conference opener against Colorado, the Red Raiders lost all 19 of their remaining Big 12 matches (Oklahoma State does not field a team in this sport, meaning that each partcipating school faces 10 opponents, twice each). In Texas Tech's final 11 matches, it only won one game (i.e., 10 times it was swept 3-0 and once lost by a 3-1 score). Above is a photo I took at Tech's home match against Iowa State, relatively early in conference play.

Among the misfortunes experienced by the Raiders, senior setter Emily Ziegler went out -- for the season, it turned out -- after the eighth Big 12 match with a foot injury that required surgery (here and here).

Replacing Ziegler for the Raiders' remaining 12 conference matches was Kourtney Dunnam, whose path to the Texas Tech starting setter's role was unusual, to say the least. After playing for one year at Wayland Baptist University, Dunnam transferred to Texas Tech, where she was the team manager for two years. Certainly, one must admire Dunnam's persistence in working her way up to a roster spot in a major Division I conference.

The research methodologist in me saw an opportunity to take advantage of this "natural experiment" (some might say "quasi-experiment") involving the Red Raiders' change in starting setters, a change that was brought about in more-or-less random fashion.

As shown in the chart below, there were eight opponents (shown in blue) whom Texas Tech faced once with Ziegler as starting setter, and once with Dunnam in that role. That aspect provides experimental balance. Less optimal for research purposes are the facts that (a) Ziegler's matches were in the early part of conference play and Dunnam's in the later part; and (b) identity of the setter was confounded with game location (i.e., for any given opponent, if Ziegler faced the team at home in Lubbock, Dunnam of necessity faced it on the road, and vice-versa). 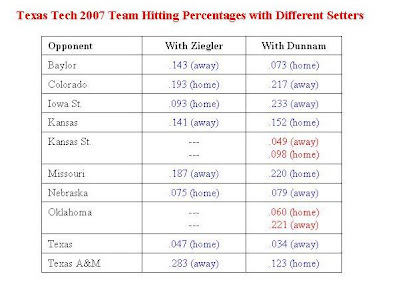 Still, though, I thought it would be interesting to compare the Red Raiders' hitting percentages under the direction of the two setters, but only against common opponents (Dunnam faced Kansas State and Oklahoma twice each, listed in red above, the data from which are not included in the analyses).

As it turned out, Texas Tech's average hitting percentage was virtually identical against the eight common opponents, .145 under Ziegler and .141 under Dunnam.

What is also apparent from the chart is that the quality of the opponent seemed to be a much more important factor in the Red Raiders' hitting percentage. Nebraska and Texas tied for the Big 12 title, each with a 19-1 record. Against the Cornhuskers, Tech hit .075 and .079 in the teams' two matches, whereas against the Longhorns, Tech hit .047 and .034. Conversely, against the less-dominant conference opponents, the Raiders usually hit in the .10's and .20's. 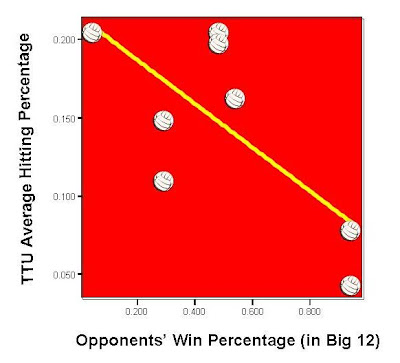 It would, of course, be a gross exaggeration at this point to say that the identity of a team's starting setter is irrelevant. This analysis was done on only one team, in one year, in a small number of games. Texas Tech's hitting percentages under Ziegler were already pretty low, so even with the less experienced Dunnam, there may not have been much room for them to drop further (i.e., a "floor effect").

If any of you readers know of further examples of a team abruptly switching setters midway through the season, please provide that information in the Comments section. I would be happy to attempt replications of the above findings with other teams.
at November 26, 2007 1 comment:

The story coming out of the University of Nebraska volleyball building tonight, quoting from this news release, is that:

Tracy Stalls tied an NCAA record by putting down 13 kills on 13 swings for a perfect 1.000 attack percentage, as the Husker volleyball team sent Stalls and NU's three other seniors out in style Saturday night with a 30-18, 30-10, 30-11 sweep of Texas Tech.

For those not all that familiar with volleyball statistics, what this means is that 13 times the ball was set up for Stalls to swing at, and all 13 times she delivered balls that the Red Raiders could not field. Stalls hit no balls into the net, nor out of bounds, had no balls blocked back in her face by Texas Tech, and did not even have any balls dug up by the Red Raiders in the backcourt.

[Cross-posted at my Hot Hand blog, for the study of sports streakiness.]
at November 24, 2007 No comments:

One of the most widely discussed phenomena across a number of sports is the home-court (or home-field) advantage (HFA). According to Cecil Adams, who fields readers' questions on a website called The Straight Dope:

Perusing a comprehensive recent study ("Long-term trends in home advantage in professional team sports in North America and England [1876-2003]," Pollard and Pollard, 2005), I note as follows: (a) since 1900, notwithstanding some year-to-year swings, MLB home-field winning percentages have been remarkably stable at about .540; (b) the NFL HFA fluctuates a lot, no doubt because fewer games means more statistical noise, but home-field wins are usually in the 55 to 60 percent range; (c) NHL home-ice wins have declined from 60 percent in the 70s to a pretty steady 55 percent since the mid-90s; (d) NBA home-court wins dropped from 65 percent in the mid-80s to 60 percent in recent years, still the highest of the U.S. sports studied; and (e) HFA shows up in UK sports too.

While browsing some sites in search of historical volleyball statistics, I came across a page in the historical section of the 2007 Pacific-10 women's volleyball media guide (see "Team vs. Team Results") that summarized the head-to-head records between all pairs of conference opponents from 1986-2006, breaking the totals down by location. (The page actually said 1986-2005, but given that each pair of rivals was listed as playing 42 matches, that fits with 21 years, not 20).

With 10 teams, there are 45 head-to-head rivalries. Going alphabetically, we have Arizona, who has rivalries with nine other teams. Next is ASU who, having already accounted for its rivalry with U of A, has eight rivalries. Next is Cal-Berkeley who, having already accounted for its rivalries with U of A and ASU, has seven. Accordingly, 9 + 8 + 7 + 6 + 5 + 4 + 3 + 2 + 1 = 45. In each of the 21 years, there have been 90 conference matches (two matches, one at each team's home, in each of the 45 rivalries). Overall, then, I had data from 1,890 matches (21 X 90). In the future, I'll analyze other conferences, but a database of nearly 2,000 matches is a good place to start. Also, an essential element in testing HFA's is schedule symmetry, that each pair of teams plays on each team's court during the season, and the Pac-10 has that.*

If you look at the above-linked page in the Pac-10 history section, you'll see a bunch of entries that look like the following:

I've put the numbers in green and orange, the school colors of UO and OSU, respectively, to help distinguish the teams. We see that, with 21 matches played at each place, the Ducks won five more at home (12) than away (7), and conversely, the Beavers also won five more at home (14) than away (9). The Oregon-OSU series thus receives an HFA score of 5. Below is shown the distribution of all 45 HFA scores, with another specific example (USC and WSU) highlighted (you can click on the image to enlarge it): 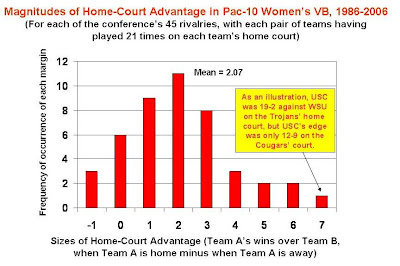 My own characterization is that the home-court advantage is pervasive, yet modest. There were only three instances of teams doing better against a particular opponent on the road than at home, and in each case only by one match (shown above as "-1"). Several more rivalries above had a "0" differential. Many -- though not all -- of these scenarios reflected dominance; for example, Stanford was 21-0 against Oregon State in Palo Alto and 21-0 in Corvallis.

The rest of the histogram shows consistently positive HFA values, indicating that Team A tended to have more wins against Team B on Team A's court than on Team B's. In a few instances, the HFA margin was as large as +6 or +7, but the average margin was close to +2. What that tells us is that, having played a team 21 times on your own court and 21 times on theirs, the average HFA comes to about one excess win per decade due to the home court.

Thus, with an HFA of essentially 55%, Pac-10 women's volleyball seems consistent with the other sports. The scenario of loud, screaming fans right on top of the players notwithstanding, this initial volleyball study fails to find an outsized home advantage on average, although a few particular rivalries have them.

*The Pac-10 media guide said that Cal was 14-8 at home against Washington State, whereas WSU led Cal 12-8 on the Cougars' home court, thus implying that an asymmetric 22 matches were played at Cal and 20 at WSU. I consulted Cal's media guide and found the Golden Bears' HFA to be 13-8 and WSU's to be 14-7. There appear to be other scattered errors throughout the Pac-10 records.
at November 06, 2007 3 comments: