This past weekend saw the opening of women's college play in the U.S., with the nationally televised (on CBS College Sports cable channel) Runza/AVCA Showcase from Omaha, Nebraska taking center stage. Each match featured a Big 12 school (either Nebraska or Iowa State) taking on an SEC school (Florida or Kentucky). As it turned out, tournament organizers saved the best for last, as yesterday's closing match between Florida and Nebraska came down to an exciting finish, with the Gators prevailing 15-12 in the fifth (boxscore).

For this match, I created the two figures below (one for each team), which convey two aspects of offensive attack: players' hitting percentages (on the vertical axis) and number of hitting attempts (horizontal axis). Players are arranged left-to-right in descending order of hitting percentage. You may click on the figures to enlarge them. 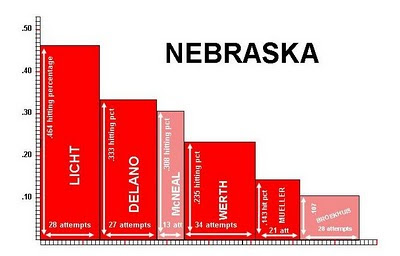 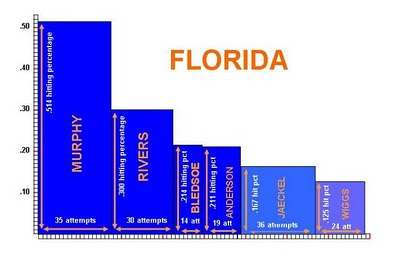 The ideal would be to have rectangles that were both tall and wide, indicating that a player maintained a high hitting percentage over a large number of attempts. The Gators' Kelly Murphy epitomized this combination. Undesirable shapes are tall-and-thin (a player who hits well, but gets few attemps) and short-and-wide (a player who hits for a low percentage, but gets a lot of attempts). I've depicted these suboptimal situations in the figures with paler shades of red and blue.

Whether volleyball coaches and analysts find these graphs useful remains to be seen. One immediate application of the graphs could be in goal-setting. Players with large numbers of attempts but low hitting percentages could be shown the graph, with the coach setting the goal of some specific, higher hitting percentage for the player to work towards.
at August 30, 2010 3 comments: