Tristan Burton, whose work has been discussed from time to time on this site, has launched his own page, which he's calling Volleyball Analytics. I welcome Tristan to the "club" of volleyball bloggers/webmasters and wish him the best with his site.
at May 19, 2011 1 comment:

The NCAA men's volleyball season concluded last night. For UC Santa Barbara, which vanquished powerhouse USC in Thursday's semifinals, the Gauchos' gaudy hitting percentages of late (roughly .400 at the team level and as high as the .800s at the individual level) were (for the most part) nowhere to be found. Instead, it was an Ohio State squad, whose season featured such inauspicious outings as a loss to UC San Diego and a five-game match with Princeton, left standing.

The hitting heroes last night were wearing Buckeye red and white (box score). Grayson Overman hit .800 with 12 kills and no errors on 15 attempts (fear the faux-hawk!). Shawn Sangrey played more of a workhorse role, garnering 30 kills (with 9 errors) on 54 attempts (.389). OSU hit .329 as a team, compared to .198 for Santa Barbara. The Gauchos' stalwart, Jeff Menzel, was barely in positive territory (.025).

Obviously, winning Game 2 was important for Ohio State, not only to prevent an 0-2 deficit, but also (at least in retrospect) for how it seemed to shock UCSB. What I thought was key to Game 2 was OSU's high siding-out percentage (76%), which prevented the Gauchos from getting much traction whenever they went back to serve. In the decisive Game 5, the Buckeyes took siding out to a new level, 100%, while hitting .714 for the game.

The Buckeyes had 26 service errors, although a lot of them were at the beginning of the match. Perhaps the risky serving was an attempt by OSU to signal right from the start that it would be pulling out all the stops to try to win.
at May 08, 2011 No comments:

UCSB Does It Again, Will Face Ohio State in Final

I was skeptical of whether UC Santa Barbara could replicate its .395 hitting percentage against USC in the Mountain Pacific Sports Federation men's tournament final, in the teams' NCAA Final Four rematch last night. Boy, was I wrong! The Gauchos hit virtually the identical percentage, .394, in beating the Trojans again, 29-27, 24-26, 25-15, 25-18 (box score). 'SC hit .333.

As shown in the following graph, the Gauchos' individual hitting percentages varied between the MPSF final and NCAA semifinal. It was as if the Trojans made a concerted -- and successful -- effort to stop Jeff Menzel, but the increased attention on him left openings for other UCSB hitters. 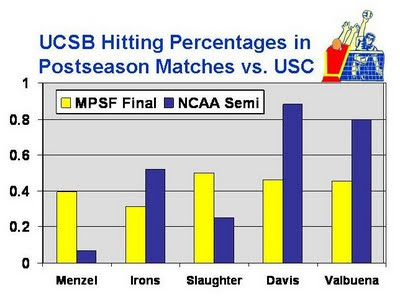 As Trojan Coach Bill Ferguson said in his post-match press conference [bracketed annotations by me]:

When you look at our match last week with them, Jeff Menzel killed us, Scott Slaughter killed us, and [tonight] we did an unbelievable job I thought, keeping Menzel hitting .071. We kept Slaughter under .300. We kept him at .250, which I thought was pretty unreal. We did a real good job there. [Tonight] Cullen Irons killed us and Dylan Davis was nothing short of amazing... Last time we played them, everyone on their team that was on the floor hit over three hundred. This time it was .071 for Menzel and .250 for Slaughter. That was great, but Irons and Davis definitely made up for it. [Trey]Valbuena had big numbers but I don’t know if that was necessarily our downfall.

By many accounts, the main reason why Santa Barbara was able to hang in there early and pull away late was USC's 20 service errors. Said Ferguson, "If you look at the stat lines throughout the night, we were outhitting them until, I believe, the fourth set. We were out-blocking them. But every time we got some momentum, we went back to the [service] line and missed. That gutted us." (Annotation in original transcript.)

Having admitted my erroneous prediction about the Gauchos not being able to match their hitting percentage from the MPSF final, let me mention another claim where I feel I was right. I was in a very small minority among the voting panel for the Off the Block Blocker of the Year award in giving strong consideration to USC's Steven Shandrick, ultimately recommending him for second place. I feel vindicated by the fact that Shandrick recorded a match-high eight blocks in the Final Four match against UCSB.

The Trojans' aptly named Murphy Troy was close behind with seven blocks, part of USC's plan to counteract the top Gaucho hitters (see the press conference question to Ferguson, "Coach can you talk about how you were able to contain Slaughter and Menzel?").

Oh yeah, one other match was played Thursday night, to determine the other finalist in Saturday night's title match. Ohio State beat Penn State on the Nittany Lions' home court. I would make UCSB a heavy favorite to take the title, but given how unpredictable things have been lately, who knows?
at May 06, 2011 No comments:

Who is the gaucho amigo?
Why is he standing,
In your spangled leather poncho,
And your elevator shoes?

So unexpected is the University of California, Santa Barbara's run to the NCAA men's Final Four that many observers (figuratively) will be singing "Who are those Gauchos?" in the spirit of the old Steely Dan song, as the competition gets underway Thursday night in State College, Pennsylvania.

UCSB finished seventh in the Mountain Pacific Sports Federation (MPSF), but put together an improbable run in the conference tournament that included successive wins over second-place BYU, sixth-place Long Beach State (which had eliminated third-place Stanford), and first-place USC for the championship.

Because the powers that be in college volleyball (as well as other sports) apparently deem it more appropriate to award an automatic NCAA tournament bid to the winner of a one-week conference tournament rather than a three-month conference season, UCSB received the MPSF's automatic bid to the Final Four. USC, as the nation's top-ranked team all season, received the single at-large berth, with host Penn State qualifying for the Final Four via the Eastern Intercollegiate Volleyball Association and Ohio State, via its counterpart league for the Midwest.

On Thursday's opening night, No. 1 seed USC gets an immediate rematch with No. 4 UCSB, and No. 2 Penn State faces No. 3 Ohio State. The championship match is Saturday night.

Considering my build-up in the above paragraphs about Santa Barbara, my statistical focus in this posting naturally examines the Gauchos' play in winning the MPSF tournament. As I frequently do, I put the spotlight on hitting percentage. In this instance, I compare UCSB's hitting percentage to its opponent's in nine specific matches: the Gauchos' MPSF tournament wins over BYU, Long Beach State, and USC, and their MPSF conference-season matches (two apiece) against those same schools.

My first chart below (on which you may click to enlarge) plots the numerical value (UCSB hitting percentage - opponent hitting percentage) for each match. A positive value, of course, means that the Gauchos outhit their opponent; the neutral point (.000) is depicted as a heavy white horizontal line to aid viewing. A negative value means that UCSB was outhit by its opponent in a particular match. The W or L displays whether the Gauchos won or lost the match. 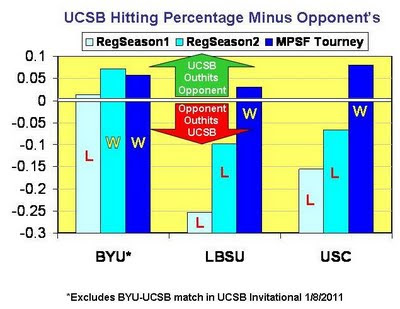 The main conclusion I would draw from this first chart is that, particularly when facing Long Beach State and USC, Santa Barbara's hitting success relative to its opponent steadily went up from the Gauchos' first match against a given team, to their second match, to their third (MPSF tourney) match.

Hitting .395 in the MPSF tourney final against USC was no easy task for the Gauchos. As seen in the next chart, four of UCSB's five most frequently called upon hitters recorded attack percentages ranging from .396 to .500, and the fifth hit a perfectly respectable .312. The Gauchos' workhorse, 6-6 outside hitter Jeff Menzel, took 41.1% of his team's spike attempts (53 of 129) in the MPSF final and still maintained a superb .396 average, with 28 kills and only 7 errors. 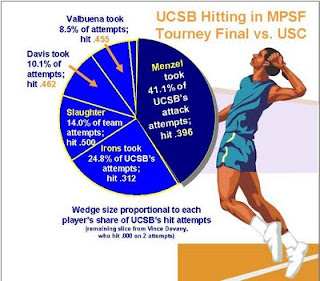 Even with such great overall hitting in the MPSF final, UCSB still barely beat USC, 16-14 in the fifth game. It seems unlikely the Gauchos can replicate such a performance against 'SC tomorrow night, but that's what they play the matches for.

To get a feel for USC's season to date, a couple of earlier postings of mine should be helpful (here, here, and here). I don't really have too much to say about Penn State and Ohio State at this point, other than that they split two matches with each other during the year (each winning on its home court). Ohio State went 2-4 against MPSF teams (Pepperdine, Cal State Northridge, UC Irvine, and UC San Diego), whereas Penn State went 3-4, including a win over UCSB (the Nittany Lions' other MPSF opponents were UCLA, Hawai'i, Irvine, Northridge, and Long Beach State).

I will chime in during the Final Four with statistical analyses. My fellow volleyball blogger Vinnie Lopes at Off the Block has been providing excellent general coverage in previewing the men's Final Four and I have no doubt he will continue to do so throughout the tournament.
at May 04, 2011 No comments: