A little over a week ago, Loyola University Chicago won its first NCAA men's volleyball title, as the host Ramblers stopped Stanford in four games. According to Off the Block's preview of the final, "Loyola en route to being ranked No. 1 throughout the majority of the season... had a nation-best .363 attack percentage. In addition, Stanford... was second in the nation with a .336 attack percentage." Further, according to the ESPN-U broadcast, this year's final was the first ever to feature the nation's top two hitting teams.

For this reason, and others, one might dub 2014 the "Year of the Offense" in men's collegiate volleyball. One type of attack in particular, known as the "bic," was instrumental to Loyola's final-match victory. According to many accounts, bic is a contraction of "back-row quick" attack. Another story, recounted in this video, is that the UCLA team's hand-signal for the play many years ago (featuring Jeff Nygaard and Stein Metzger) was a flick of the thumb, as though activating a BIC lighter.

A player in the back row can attack above the net only if he or she leaves the ground behind the 10-foot line. On a bic, the quick-set near the net gives the appearance of being intended for the front-row middle-hitter (who jumps up to fake an attack), which lures the opposing blockers into the air. When the front-row attacker and blocker(s) return to the ground, the back-row attacker can spike the ball unopposed. The term "pipe" is sometimes used interchangeably with "bic," whereas some volleyball experts distinguish the two. The bic is a devastating attack when executed properly, as shown in this video compilation (which uses the pipe terminology). An extended discussion of the bic/pipe is available here from VolleyTalk.

Loyola's Cody Caldwell was the tournament's Most Outstanding Player, recording 20 kills in the final match with only 2 hitting errors on 32 swings, for a .562 hitting percentage (box score). Caldwell produced nine of those kills in Game 1, three via bic plays and six from his normal perch as an outside hitter on the left side of the front row.

Another noteworthy element of Loyola's title-match performance was its high side-out rate. Overall, the Ramblers won points 75% of the time that Stanford served (88%, 78%, and 81% in Games 1, 3, and 4, respectively, which Loyola won; and 60% in Game 2, which Stanford won). Judging by the Cardinal's serving statistics vs. the Ramblers (5 aces and 14 errors), it seems Stanford tried to serve aggressively to derail Loyola's serve-receipt game. This (apparent) strategy was to little avail, as Loyola sided-out well and all of Stanford's serving errors only raised Loyola's side-out rate further. Below, I have created a frequency distribution of side-out rates Stanford allowed to all of its opponents during the 2014 season, which is available from the Cardinal's match-by-match log (you may click on the graphic to enlarge it). 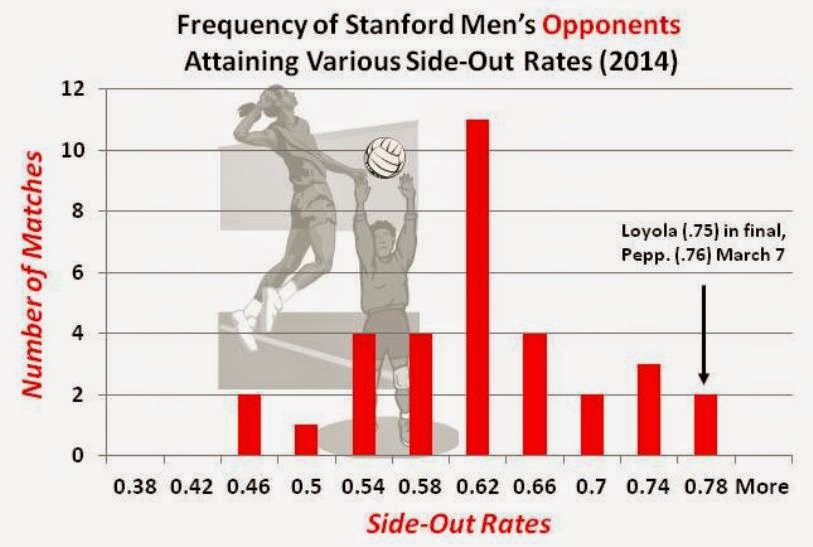 Loyola's 75% side-out rate actually wasn't the highest Stanford had allowed all season, but it was close (Pepperdine sided-out 76% of the time on March 7, yet the Cardinal still prevailed, 3-1). Both of these side-out rates are considerably higher than what Stanford typically allowed this season (mean = 61%, median and mode = 62%).


***
Besides Loyola and Stanford recording the nation's two highest hitting percentages during the season and both reaching the NCAA title match, one other team led me to think of 2014 as the Year of the Offense, as noted above. In the quarterfinals of the Mountain Pacific Sports Federation tournament, BYU swept USC on the strength of some spectacular hitting by the Cougars. BYU hit .519 in this match, amassing 44 kills, with only 4 errors, on 77 attempts. Four hitting errors is an amazingly low total; two of them resulted from the Trojans stuff-blocking spike attempts back onto the Cougar side of the floor for USC points, whereas BYU hit two balls out of bounds.

BYU had won all three match-ups with Stanford prior to the NCAA tourney (twice in MPSF league play and once in the conference tourney), but the Cardinal turned things around against the Cougars in the NCAA semifinal.
at May 11, 2014 No comments: