Determining My Vote for Men's OH of the Year

Once again, I have been invited by Off the Block blogger Vinnie Lopes to cast a ballot for men's college players of the year at the various volleyball positions. Because my votes involve a fair amount of statistical analysis, I typically only vote in one category. This year, I have chosen to vote for Outside Hitter of the Year.

Spiking may be the primary skill expected of outside hitters, but not the only one. They would also be expected to block, pass (on serve-receipt and in the middle of rallies), and serve. In the far right column of most box scores, one sees the heading "Points," which, for each player, shows the total number of points directly scored via kills, stuff blocks, and service aces. Though it encompasses multiple skills, I have never made much of the "points" statistic, as it does not reflect the number of points a player has cost his or her team through five possible types of errors: in attacking (hitting balls out of bounds or getting stuffed), serving, receiving serve, ball-handling, and blocking (i.e., touching the net).

To determine my vote for Outside Hitter of the Year, I am introducing a variation on the usual points statistic, which represents points earned minus points lost. I am calling my new statistic "Points Profit." (I could have called it "Net Points," reflecting "net" in the accounting sense, but such a term could easily be confused with points won at the net on a volleyball court.)

Using the top ten outside hitters nationally in hitting percentage (listed above), my plan was to compute Profit Points for each OH from his five toughest matches of the season. Match difficulty was based on opponent's rankings and match locations. The top ten teams (RPI) as of when I began the analyses were:  1. Loyola-Chicago; 2. UC Irvine; 3. Lewis; 4. Hawai'i; 5. Ohio State; 6. Penn State; 7. USC; 8. Pepperdine; 9. Indiana-Purdue Fort Wayne; and No. 10 BYU.

As an example, the five toughest matches for Loyola's Thomas Jaeschke were at Lewis, hosting Lewis, at Ohio State, at Penn State, and hosting Penn State. At Lewis, Jaeschke earned 21 points and cost the Ramblers 14, for a "profit" of 7. Each contending OH's five toughest matches and how he performed in them are shown in the following chart, which you may click to enlarge. 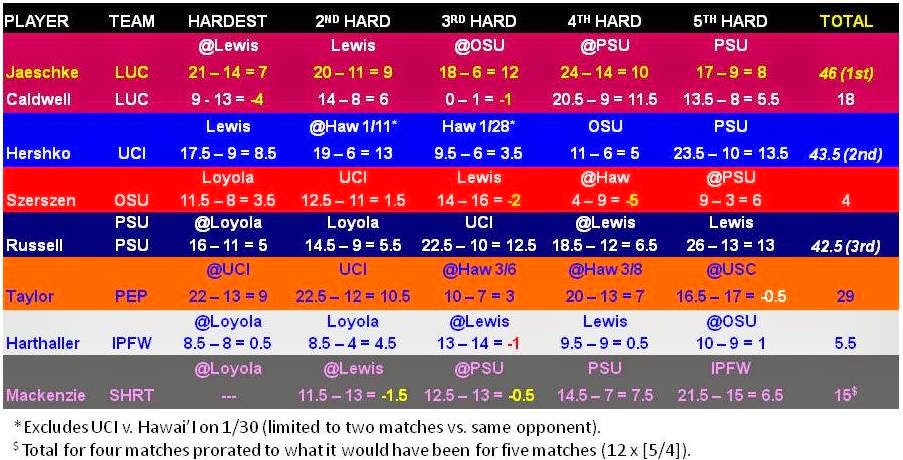 Although the candidate pool was drawn from the top ten national leaders among outside hitters in hitting percentage, only eight OH's were analyzed. Martinez was excluded because Pfeiffer played only one match against a top ten opponent (Ohio State). In addition, Grand Canyon's Schaefer missed substantial action in his team's most difficult matches, so he was likewise excluded. Sacred Heart's Mackenzie played in four of his team's five toughest matches, so I prorated his four-match total by multiplying it by (5/4) to estimate what it would have been had he played all five matches.