For pretty much the entire four years that I've maintained this blog, I've extolled the importance of hitting percentage as a measure of a team's overall ability. To win games (sets) and matches, teams need points. Hitting percentage is based heavily on teams' productivity in winning points via kills, but penalizes teams for hitting errors, which of necessity give points to the opponent. Dividing (kills - errors) by total attempts further weakens teams' hitting percentages if a lot of their attempts are kept in play by the other team. If a team compiles a high hitting percentage and limits its opponents' hitting percentage, it will probably win a lot of matches.

Last year in previewing the start of the NCAA women's tournament, I showed that there was a strong correlation where the highest seeded teams also had the highest hitting percentages. I used teams' overall regular-season hitting percentages, however, which don't take into account degree of schedule difficulty, both across teams and within different parts of the season for any one given team.

To refine the methodology, I've done similar calculations on the eve (approximately) of this year's tournament, but looking only at seeded teams' hitting percentages against other seeded teams they played during the regular season. (You may click on the table below to enlarge it, noting also that the table appears in separate upper and lower blocks due to space limitations within a single block.) 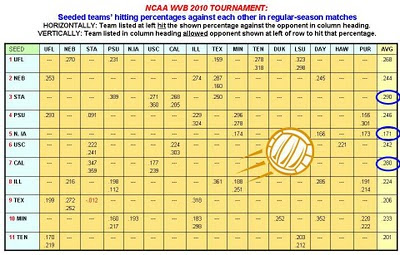 If we were going purely on teams' average hitting percentages against other teams that ended up being seeded, then Stanford at .290 and Cal at .280 would be undervalued in the seedings (see blue circles in the right-hand column). Cal's average is based on only four matches, however, and in two of them (against Stanford) the Golden Bears hit at sizzling levels around .350. Northern Iowa really looks out of place as the No. 5 seed with its .171 average hitting percentage, which came only against some of the less higher-seeded teams.

Between the No. 6-12 seeds, nearly all of the teams held their seeded opponents to roughly .250 hitting. The one exception was No. 10 seed Minnesota, which held its seeded opponents to a paltry .185 average hitting percentage (see red circle). The Golden Gophers did allow Penn State to approach .300 in both Big Ten matches between the teams, but shut down other teams such as Duke (.044) and Dayton (.117).

The No. 13 and 14 teams, LSU and Dayton, respectively, held their seeded opponents to roughly .260 hitting. Lastly, we have No. 15 Hawaii, which played only one match all season against a team that ended up being seeded, and No. 16 Purdue. The Boilermakers were pretty "lights-out" (to borrow a baseball expression) in shutting down opponents' offenses, including in one of two matches against Penn State. The only problem for Purdue is that it hasn't hit that well itself against top competition.

We'll soon see the effectiveness (or lack thereof), in terms of prognostic success, of looking at the teams through this lens.
at November 30, 2010 1 comment:

The latest issue of the online Journal of Quantitative Analysis in Sports includes the article "Relationship between the Opponent Block and the Hitter in Elite Male Volleyball," by Rui Manuel Araújo, José Castro, Rui Marcelino, and Isabel R. Mesquita. A brief summary (abstract) is available here. Full-text access is by subscription, but the journal has guest viewing privileges for individual articles.

This study is based on observations from the 2007 World Cup of men's volleyball. The authors studied setters' allocation decisions in relation to two features of the opposing block:  the spacing of the blockers along the front row at the start of the point, and the type of block being faced (none, single, double, triple; the latter two also categorized as "compact" or with open spaces between the blockers). Analyses (via chi-square) were entirely two-way (allocation vs. spacing; and allocation vs. type of block), with no three-way analyses.

Because the article refers extensively to the six zones of the court often used in coaching, I created the following diagrams of the blocking team's side to illustrate the different types of initial block spacing described in the article (click here for more information on the zone system). The distinctions among the blocking arrangements mainly boil down to whether one or both outside blockers are "spread" (i.e., positioned toward the sideline) or "pinched" (i.e., positioned toward the middle blocker). 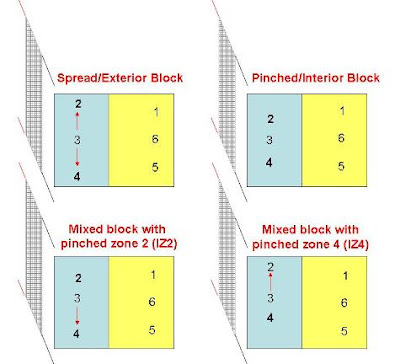 Overall, 41.2% of the sets went to teams' two left-side or "ace" hitters; 32.1% to teams' opposite (right-side) hitter; and 25% to teams' two middle hitters. The setter himself took the remaining 1.7% of attacks. Of the findings relating set allocation to characteristics of the block, here are what appear to be the main ones:
The article concludes, in part, "This study highlighted that the blockers’ 'starting points' are taken in consideration by the opponent setter to create the best conditions for the offensive players (hitters)" and that the game "at the elite male level is characterized by a constant adaptation between setter’s options and the opponent block tactics and strategies."

The article was, for the most part, straightforward to follow. However, a few little things were confusing, such as some percentages in one of the tables that should have added horizontally to 100% (where the total at the end of the row even said 100%), but the numbers didn't in fact sum to 100. This kind of research is difficult to do, however, with extensive videotaping and coding of matches, so I commend the authors for their work.
at November 26, 2010 No comments:

Increasingly, it seems, one hears of volleyball teams getting "out of system" or having to recover from same. According to Bonnie Kenny and Cindy Gregory's book Volleyball: Steps to Success, "Out-of-system play occurs during a rally when something happens to take the team away from the preferred pass, set, hit or dig, set, hit sequence" (p. 141). I decided several weeks ago that, while watching several upcoming matches on television, I would keep some statistics on women's college teams' ability to stay in-system on their serve receipt, and how this would relate to their likelihood of ultimately winning the rally (i.e., siding-out).

As teams attempted to run their offense in immediate response to the opponent's serve, it was usually pretty easy to classify whether they were in or out of system. Certainly, if someone other than the setter made the second contact, or if the team was aced or made an overpass, it was out of system. I also considered a sequence to be out of system (although not as egregiously) if the setter had to tip (with one hand) or bump the ball to the hitter. In addition, I recorded whether the receiving team successfully sided-out (not just an immediate side-out, i.e., serve, pass, set, kill, but all side-outs, regardless of how long the rally lasted).

I clearly expected teams to exhibit greater side-out success rates when their initial response to the opponent's serve was in, as compared to out of, system. To get an idea of the magnitude of the difference, however, we needed some empirical data, hence the following analyses. The following chart (which you can click on to enlarge) contains the key information. The data should be considered only an approximation, as I sometimes missed a play or two per game (sometimes it was my fault due to a momentary lapse of attention, but other times things were outside of my control, such as a TV replay interrupting the beginning of the next point). Because the numbers for any one team would be too small for statistical analysis, I added up the data for each column for all the teams, thus producing aggregate figures. 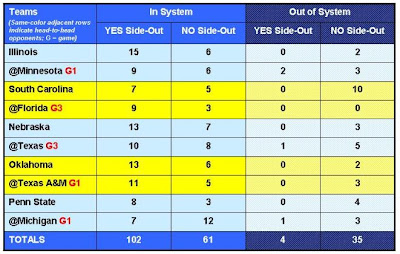 It did not surprise me that teams rarely win the point when they start off out of system. It surprised me a little bit, though, that teams did not side-out more frequently when they mounted an in-system response to serve. A spike cleanly set up and delivered is no guarantee of winning the point, however, as the ball can be blocked or dug. As anyone who saw this past weekend's Penn State-Michigan match knows, there was a sequence in Game 1 during which the Wolverines consistently mounted in-system attacks -- and consistently got stuffed by the Nittany Lions!

This investigation, like many of my previous ones, aimed to provide an initial look at a phenomenon, in this case out-of-system play, and put some ideas out there for operational measures and statistical analyses. Further research could examine whether particular servers are adept at getting the opponent out of system, as well as probe in/out-of-system status not just in response to the opponent's serve, but also to spikes and free balls.

UPDATE:  This topic has generated some interesting discussion at VolleyTalk. Here's a link to the thread.
at November 09, 2010 3 comments: