The women's college volleyball season is only three weeks old, so the Top 10 teams in the AVCA pre-season poll shouldn't have too many losses at this point, should they?

Well, as shown in the following chart, the number of Top 10 teams who are still undefeated is... ONE. The number of these teams with three or more losses is... THREE.


And it's not merely the number of losses by Top 10 teams. It's to whom. Florida losing to Northern Arizona? Wisconsin losing to Baylor? USC losing to Central Florida and Marquette?

I cannot say with certainly that this is the most upset-laden first three weeks ever in women's college volleyball, but I doubt there have been many seasons like this one.

The lone unbeaten team among those in the AVCA pre-season Top 10 is BYU, who is doing it with defense. Even excluding a season-opening exhibition match in which the Cougars held Utah Valley to an .086 hitting percentage, BYU's opposition hitting percentage is currently an extremely low .177. As shown in the following graph, the Cougars have been allowing some truly microscopic hitting percentages by opponents (BYU played two matches on a trip to Duke). 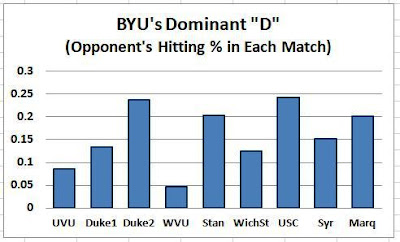 Another team that has been extremely consistent so far is the University of Michigan. The Wolverines are 9-0 and haven't even given up a game. The competition hasn't been great, but among Michigan's sweeps are ones over respectable teams such as LSU and Colorado State.
at September 10, 2018 No comments: