Looking Back at the 2017 College Women's Season: Nebraska, Penn State, and Mick Haley

Three stories stand out to me, in looking back at the 2017 college women's season: 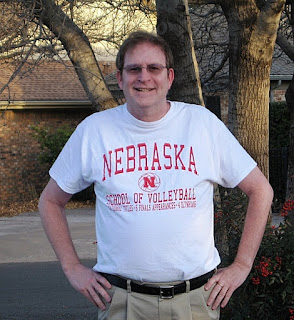 When I visited the University of Nebraska-Lincoln in mid-October on academic business, I stopped by Husker Headquarters near the end of my trip to pick up a souvenir. What I ended up purchasing was a Nebraska "School of Volleyball" shirt. Little did I know at the time that the numbers of NCAA championships and final appearances listed on the bottom line of the shirt (click on photo to enlarge) would have to be updated so quickly.

The Huskers started off the season with a 6-3 record, the losses coming to Oregon, Florida, and Northern Iowa (game-by-game log). However, by midseason, Nebraska had things rolling again, going 19-1 in B1G conference play (losing only at Wisconsin), en route to a 32-4 final record.

The Huskers' national championship, accomplished with a 3-1 (25-22, 25-17, 18-25, 25-16) win over Florida in the title match, raised Nebraska's number of women's NCAA volleyball titles to five (including two of the last three) and finals appearances to eight in school history. The Gators faced a difficulty in the finals that I identified in connection with their win over USC in the Elite Eight, namely allowing extremely high side-out rates to their opponents, meaning that Florida could not string together points on its own serve. As shown in the Nebraska-Florida box score, the Huskers sided-out at 77% in Game 2 and 76% in Game 4.

Florida has much to be proud of from this season, including a three-match winning streak in the tournament over Pac-12 schools -- UCLA, USC, and Stanford -- to reach the NCAA championship match (Gators' season log).

With NCAA titles in 2007, 2008, 2009, 2010, 2013, and 2014, Penn State won the championship six times in eight years. Perhaps even more remarkable than the fact the Nittany Lions have not won a national title in the past three seasons is that, as documented in the following chart, Penn State has lost seven straight matches to Nebraska during the same time span.

Whereas the Huskers' hitting percentages have varied widely (from .173-.347) in these seven matches vs. Penn State, the Nittany Lions' hitting percentages have hit a wall in the low .230's, never exceeding .234 vs. Nebraska. How unusual is it for Penn State to hit at such a low clip? I counted a total of 13 matches the Nittany Lions played in 2015, 2016, and 2017 against Top 10 opponents other than Nebraska (four each against Stanford and Minnesota, two each against Wisconsin and Michigan State, and one against Hawaii). In a majority (seven) of these matches against top-shelf opposition, Penn State's hitting exceeded .250 (four times from .250-.299 and three times exceeding .300).

Our final topic is the controversial end to Mick Haley's 17-year run as coach at USC. Back in 2007, I looked at several top programs' NCAA tournament performance from 2003-2007, relative to what would have been expected from their seedings. For example, the No. 1 national seed in the NCAA tourney would be expected to win all six matches necessary for the title, the No. 2 seed would be expected to win five matches (before losing in the final), the No. 3 and 4 seeds would each be expected to win four matches, etc. I decided to repeat this analysis specifically for Haley over the past 10 seasons (2008-2017), the results of which appear in the following chart.

*In match-up of two unseeded teams, it is assumed each team has 50% chance of winning.

Totaling up the final column, Haley's USC teams won one more NCAA-tournament match over the 10-year period from 2008-2017 than would have been predicted from their seedings. In other words, Haley led his teams in the NCAA tourney about as far as they were expected to go, neither greatly exceeding nor greatly falling short of these benchmarks (one exception being 2015, in which the Trojans were the national No. 1 seed, but advanced only as far as the Elite Eight).

On the negative side of the ledger, only once did a Haley-led Trojan squad attain better than a No. 6 NCAA-tournament seed in the last 10 years (2015). Further, USC's failure to make even a single Final Four from 2012-2015 with superstar Samantha Bricio on the team has to sting for Trojan fans.
at February 04, 2018 No comments: