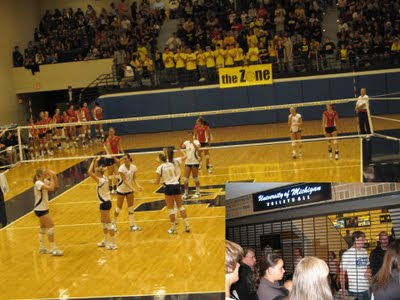 Your intrepid VolleyMetrics correspondent was in Ann Arbor, Michigan last Saturday night for the match between Ohio State and U of M. Actually, I was in town to attend an academic conference and visit my graduate-school alma mater, and as a bonus the volleyball match fit my schedule.

The night before, the Wolverines had taken two-time defending NCAA champion Penn State to five games. I knew the Penn State match had been sold out, but when I got to the arena after flying all day Saturday, I was amazed to see the Ohio State match was too (notice the crowd-control grate in the lobby in the pictures above). I was on the outside looking in until "halftime" (between Games 2 and 3), when a number of seated spectators left and hangers-on were let in.

The statistical angle I pursued (starting with Game 3) followed up on my immediately prior posting (below), namely what happens on spike attempts where the hitter neither achieves a kill nor commits a hitting error (i.e., a "non-terminal" shot where the ball remains in play). If the non-kill hit attempt still renders the defense unable to launch its own return attack, then the original hit attempt will have achieved some measure of success. On the other hand, as I quoted Tristan Burton in my earlier posting, "An in-swing that the opponent converts for a kill is no different than a hitting error as far as the score is concerned."

I focused only on Michigan and only two Wolverine hitters, Alex Hunt and Juliana Paz, received a large enough number of sets during Games 3 and 4 to compile statistics. While I was there, Hunt had 10 non-terminal hits (three in Game 3 and seven in Game 4); of these 10, the Wolverines and Buckeyes each ultimately won five of the points. Hunt, a left-hander hitting on her far left-hand side of the court, seemed to aim straight (i.e., down the sideline) a great deal of the time, as opposed to cross-court, and the Buckeyes dug her well. Paz had six non-terminal hits (two in Game 3 and four in Game 4) and OSU ultimately won four of these points.

Michigan has made the round of 16 in each of the last two years' NCAA tournaments. The Wolverines seem to have the potential to advance further this year, but to do so, they'll probably have to become more proficient at putting balls away.
at October 23, 2009 No comments: