One of the marquee matches of the current college men's season will take place Friday night, as No. 1 USC visits No. 3 (and defending national champion) Stanford. Before we get to the statistical analysis, here's some background on each team. USC and Stanford have some common denominators: Each has had its ups and downs in recent seasons, each team relies on some big power-hitters, and tempo appears to be a major factor in each team's success.

This year's Trojans have a lot of the same core players as their 2009 squad, which lost a five-game national championship match to University of California, Irvine. One would have thought that 'SC would contend strongly for the 2010 NCAA title considering how many top players it returned, but for whatever reason, the Trojans floundered badly, finishing the year 16-11 and nowhere near title contention.

USC has righted the ship this year, however, currently standing at 16-1, with its only loss coming February 11 at Pepperdine in five games (the Waves are presently 8-12, making it seem incredible that they could beat 'SC). In an interview with the blog "Off the Block," Trojan Coach Bill Ferguson attributed this year's resurgence to improved defense setting the stage for a more effective offense. As Ferguson stated in one of his answers:

Our personnel has largely stayed the same from last year. … We had a libero by committee last year, and we now pass the ball much better than last year. That is one thing that is allowing us to do more on offense. We are playing a system that goes faster, and I think that helps. I think also we are just more athletic and mature. We got two juniors, four seniors and a sophomore and a freshman in our starting lineup. We got a pretty veteran lineup, but our passing is the biggest factor.

For the Trojans, senior Riley McKibbin in third year as starting setter, with three towering outside/opposite hitters for him to go to: senior Murphy Troy (6-foot-8), junior Tony Ciarelli (6-6), and senior Tri Bourne (6-5). In the aforementioned Bill Ferguson interview, the 'SC coach cited Bourne as an attacker who tends to fly under opponents' radar screens, as they concentrate on Troy and Ciarelli.

This year's Stanford squad features junior outside hitter Brad Lawson (6-7), who had a dominating NCAA title match a year ago as the Cardinal routed Penn State. Lawson and his fellow Stanford spikers -- who match the Trojans for height thanks to outside hitters Brian Cook (6-5, frosh) and Spencer McLachlin (6-7, senior) -- have not had the luxury of working with an experienced, returning setter, however. According to this article from when the Cardinal visited Hawai'i this season:

Stanford also has tweaked its strategy to compensate for the departures of setter Kawika Shoji, the nation's best player in 2010, and opposite attacker Evan Romero. With Erik Shoji's consistently accurate passing and Kawika Shoji's placements, the Cardinal ran the NCAA's quickest offense en route to a national championship.

Now their offense is a little more measured, due in part to the new system. Most rotations have an outside hitter follow the setter. Against Brigham Young, Stanford's rotation placed freshman middle blocker Eric Mochalski after setter Evan Barry.

Stanford currently stands at 16-6, including a loss to California Baptist, an NAIA school (the Cardinal rested some top players for that match, though). When 'SC and Stanford met for the first time this season on February 17, it was a decisive sweep for the homestanding Trojans (25-15, 25-14, 25-21).

For my statistical analysis, I decided to plot the hitting percentages for each team's three most frequently set spikers, both in the February 17 USC-Stanford match (box score) and in each team's other matches (aggregated) this season. For USC's "non-Stanford" matches, I used the Trojans' most recent cumulative statistics (removing those from the Stanford match), and for Stanford's "non-USC" matches, I used the Cardinals' cumulative stats (removing those from the 'SC match). You may click on the graph to enlarge it. 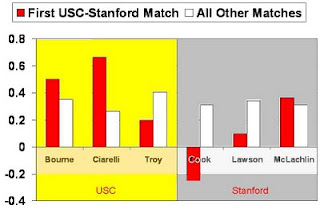 As can be seen, the Trojan rout over Stanford in the teams' earlier 2011 match was powered by Bourne and Ciarelli exceeding their hitting percentages for the rest of the season. In fact, Bourne and Ciarelli combined had only one attack error against the Cardinal (their Kill-Error-Total Attempt profiles were 10-1-18 and 12-0-18, respectively). It presumably would have been frustrating for Stanford to hold Troy well below his typical hitting percentage, yet still get pounded. Meanwhile, Lawson hit well below his usual against the Trojans and Cook definitely was not cooking (0-3-12).

Needless to say, Stanford will have to reverse these trends to beat USC Friday night.

Miscellaneous note: When I covered the UCLA men's team in 1982 for the Daily Bruin, one of the UCLA players who I interviewed and wrote about was Dave Mochalski. Now, Dave and his wife have a son on each of the teams in tomorrow's big match, USC's Steven Mochalski and Stanford's Eric Mochalski.
at March 31, 2011 No comments:

New blog "Off the Block" Focuses on College Men's VB

Ball State University newspaper reporter-turned-blogger Vinnie Lopes has an excellent site for men's college volleyball, called Off the Block. Vinnie's reporting includes statistical analysis, although stats are not necessarily the major focus. Because men's volleyball has far fewer teams at the college level than the women's game and television coverage of the two varies accordingly, it takes some effort to stay informed about the men's game. Vinnie does a lot of the work for his readers, however, with weekly previews of key men's matches (including links for following them on the Internet), article compilations, and discussion of national rankings.
at March 24, 2011 No comments: