There are two main types of hitting error. According to the NCAA volleyball statistical manual, one type of error involves hitting the ball somewhere other than in-bounds on the opponent's side of the court (i.e., "Hits the ball out of bounds" or "Hits the ball into the net resulting in a four-hit violation"). The other major type of hitting error is when the attacker is stuff-blocked (where the ball is "blocked down by the opposition to the same side as the attacker, and cannot be kept in play as a direct result of the block"). There are additional types of attack error such as the hitter contacting the net, back-row attack violations, and “thrown”/double-hit balls; the present analysis is not all that concerned with this last set of errors, however.

Of the two main types of error -- failing to hit the ball in bounds, and getting blocked -- ESPN commentator and former UCLA and Olympic great Karch Kiraly feels that one of these types of error is more encouraging for the team committing the faux pas and the other, more discouraging. During the Hawaii-Penn State NCAA women's semifinal broadcast about a month ago, Kiraly referred to "the better kind [of hitting error], getting blocked" (the remark occurs at roughly the 4:00 mark on this video).

In other words, given that you're inevitably going to commit errors, it's better to do so by getting blocked than by hitting out of bounds (or into the net), according to this line of argument. As the writer on College Volleyball Coach.com puts it, "I rarely get upset with my hitters when they are blocked, because I view it as the responsibility of the rest of the team to cover the hitter…" Stated differently, when an attempted spike gets blocked back toward the hitting team, the latter possibly can dig the ball back up and run another play. On the other hand, a spike attempt hit long or wide loses the attacking team the point immediately, with no chance to recover. Further, spraying a lot of balls out of bounds may indicate general shoddiness on the part of a team.

Getting blocked a lot wouldn't necessarily reflect positively on a team's offensive attack, either, though. It could mean a team's hitters and setters aren't all that adept at reading the block or taking steps to counteract it (e.g., "tooling" the block). It could also mean that a team's player's are not especially quick at getting to a ball that's been blocked back (i.e., covering the hitter).

Ultimately, it's an empirical question whether teams that commit larger shares of their hitting errors by getting blocked do better over the long run than do teams that commit a smaller share of their errors that way. We'll call this proposition the Kiraly Hypothesis. In testing the hypothesis, it's important to hold constant the number of errors made by a team, in order to focus exclusively on the type of errors.

To address the Kiraly Hypothesis (using the 2009 women's season), I first examined the final statistics for several conferences to find two (or more) teams in the same league that committed the same number (or virtually the same number) of hitting errors. One example, shown in the table below, is that Cal and Arizona St. each committed 368 hitting errors in Pac 10 competition (in all cases, only conference play is used). By going through a team's box scores, I could record the opponent's total blocks for a given focal team (e.g., when Cal played Stanford, I would record the Cardinal's total number of blocks, which indicate how often the Golden Bears got blocked; when Cal played Oregon, I would record the Ducks' total blocks; etc.). I did this for each of a focal team's conference matches and summed up the total number of times a focal team got blocked. If one wanted to, one could subtract this number from a team's total number of hitting errors in conference, to arrive at how often the focal team hit the ball out of bounds or into the net, touched the net, violated the back-row-attacker rule, etc. The latter step is not necessary for present purposes, however. 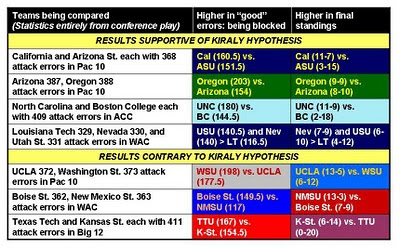 As described above, Cal and ASU were paired together because they each amassed the same number of total hitting errors. Cal got blocked (i.e., erred in the "better" way) 160.5 times, whereas ASU got blocked only 151.5 times. By this logic, the Golden Bears should have finished higher in the Pac 10 standings than did the Sun Devils and, indeed, this is what happened. Score one for the Kiraly Hypothesis. (As an aside, I cannot understand how a team -- as opposed to an individual player -- can finish a match or a season with a total ending in half-blocks.)

In the fourth comparison, I grouped Utah St. and Nevada together, due to their similarity in number of times getting blocked and in their WAC win-loss records, and compared them jointly to Louisiana Tech. In all, four comparisons supported the Kiraly Hypothesis -- the team that more frequently got blocked during conference play also finished higher in the standings than its comparison school (note that the colors in columns two and three are the same in these cases).

As also shown in the chart, three comparisons contradicted the Kiraly Hypothesis. New Mexico St. is an interesting team. The Aggies finished 13-3, second in the WAC standings only to Hawai'i. Yet, despite compiling one of the highest hitting-error totals (363) in the WAC, NMSU didn't get blocked very much (see the box scores of the Aggies' matches hosting San Jose St., blocked 1 time; hosting Boise St., blocked 3 times; and hosting Nevada, blocked 3 times; NMSU additionally had three matches in which it was blocked 4 times).

Seven comparisons, of course, do not make for a very large sample. It is possible that if, say, 50 or 100 comparisons were done, the Kiraly Hypothesis would receive greater support. However, it is time consuming to compile the data for these comparisons. The most that can be said at this point is that the Kiraly Hypothesis is not so overpowering a phenomenon that its existence can be documented with only a small number of tests.
at January 21, 2010 4 comments: