Hitting Percentages vs. Different Numbers of Blockers Up

How much of an advantage is it for a hitter to go against one blocker instead of two? Or against two blockers who have not closed ranks (i.e., a  split block) instead of two blockers who are side-by-side with no gap between them? The following analysis, a collaboration of Volleymetrics (the blog where you are now) and Volleymetrics (the statistical-analysis consulting firm owned by Giuseppe Vinci), addresses questions such as these.

After several conversations, Giuseppe agreed to share some of his data with me for analysis. Given my location at a Big 12 school, we decided to explore data from women's play in this league (2015 within-conference matches only). Far and away, most spiking attempts occurred against two blockers side-by-side (10,615). The next most swings took place facing one blocker (2,712) or a split-block (1,182). Attempts against zero (409) or three (273) blockers were relatively rare.  Here are the average hitting percentages against each type of blocking scenario: 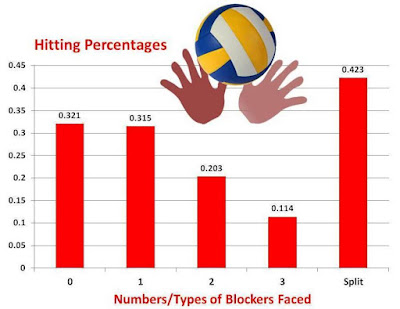 The primary comparison, in my view, is between hitting against one blocker (with a .315 hitting percentage) instead of two (.203).* The difference of .112 corresponds to 11 additional kills (minus errors) for every 100 attempts hitting against one rather than two blockers.

Ideally, for a truly "apples-to-apples" comparison, all characteristics of a hitting attempt (height and arc of the set, position of the hitter, quality of the hitter, etc.) would be the same, on average, for swings against one blocker and swings against two. That is almost certainly not the case, as sets to the outside tend to be higher than those to the middle and, thus, more likely to allow two blockers to get into position. Caution is warranted, therefore, in interpreting these results.

I told Giuseppe via e-mail that, "I would have thought the hitting percentage vs. 0 blockers would have been higher [than it was]." He replied that, "the reason [hitting percentage against] no blockers might be low can be due to attacks far from the net not having any blockers. If they are attacking just to get it over the net, it won't have a very high efficiency. When we limit attacks against no blockers to being within the ten-foot line, the efficiency against no blockers increases to .3202."

Not surprisingly, spike attempts against three blockers have a very low efficiency (.114). Swings against split-blocks, however, tend to be extremely successful (.423). Apparently, when hitters see a gap between blockers, the former are quite good at exploiting the situation.

Thanks again to Giuseppe; I greatly appreciate this gesture.