With this year's NCAA women's tournament getting underway tonight, it's time for my annual Conference-Adjusted Combined Offensive-Defensive (CACOD) ratings of the leading teams (explanation). In a nutshell, the CACOD takes each team's season-long hitting percentage, divides it by the aggregate hitting percentage it has allowed its opponents, and then multiplies the result by an adjustment factor for difficulty of conference. Relevant numbers for this year's seeded teams are shown as follows (with the actual CACOD ratio listed under "adjratio"). You can click on the graphic to enlarge it. 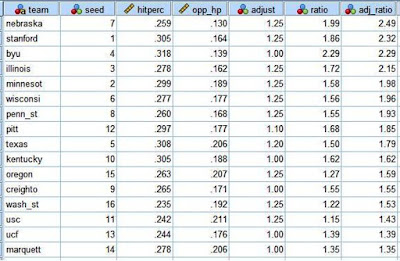 The first thing that jumps out at me is that Nebraska is grossly under-seeded (No. 7), relative to its CACOD rating (best in the nation at 2.49). The Cornhuskers' defense, allowing a microscopic .130 opposition hitting percentage, is key to the high CACOD rating, along with the 1.25 adjustment factor for playing in the Big 10. And what a Big 10 season it was, with five of the top eight national seeds coming from the conference! Nebraska went 15-5 in Big 10 play, losing twice to Minnesota (No. 2 national seed), splitting with Illinois (No. 3 seed) and Penn State (No. 8 seed), and losing its only match to No. 6 seed Wisconsin (in five in Madison).

BYU, which charged out of the gate with an early win over Stanford and was ranked No. 1 for most of the season, allowed a comparably low .139 opposition hitting percentage, while the Cougars hit a very high .318. BYU had the highest unadjusted ratio of own to opponents' hitting percentage (2.29), but received no boost to its CACOD value by playing in the West Coast Conference.

The Cougars nearly went undefeated this year, losing only in their regular-season finale at Loyola Marymount. A likely contributor to BYU's late-season difficulties was outside-hitter McKenna Miller's season-ending ACL injury, suffered on November 8 vs. Santa Clara.

BYU's offense relied heavily during the season on two hitters: OH Roni Jones-Perry, who took a team-leading 882 hitting attempts on the season (30.3% of the Cougars' 2,910 attempts as a team), recording a very strong .346 hitting percentage; and Miller, who was second on the team in attack attempts with 602 swings (20.7% of the team total) and had a .307 hitting percentage. (Click here for BYU's season stats sheet.)

With someone who takes one-fifth of your team's swings -- Miller -- out of the lineup, how would the Cougars make up for this absence? Potentially, others among BYU's leading hitters, including middle-blocker Heather Gneiting (.393 hitting percentage on 349 attempts), MB Kennedy Eschenberg (.356 on 374 attempts), and OH Madelyn Robinson (.246 on 281 swings) would receive more sets in Miller's absence. However, as the following graph shows, this is not what has happened. 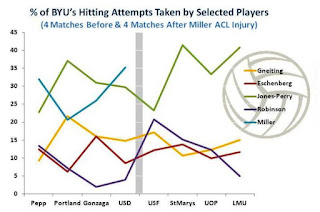 On a concluding note (for now), we have seven years of data on the CACOD, so there's a pretty decent track record. One finding is that no team with a CACOD lower than 1.91 has ever won the NCAA title. As they say in television commercials for investment companies, "Past performance is not a guarantee of future performance." Still, I would say that this year's champion is likely to come from the pool of teams with CACOD values of 1.9 or higher.