In anticipation of this weekend's Big Four tournament -- bringing No. 1 Penn State, No. 2 Stanford, No. 4 Florida, and No. 5 Texas to Gator country -- I've created hitting proficiency/attempt (P/A) graphs for each of the teams. I first introduced these graphs in my August 30 posting, with statistics specific to the Florida-Nebraska match; in contrast, the ones presented today are based on each team's cumulative season-to-date statistics.

For each of a given team's hitters (excluding those with small numbers of attempts), the player's hitting percentage is depicted as the height of a vertical bar, with the bar's width representing the number of spike attempts. Whereas I used the actual number of hit attempts as the horizontal-axis units for the Florida-vs.-Nebraska graphs, I'm now using percentage of the team's hit attempts. As you'll see, for each team I've arranged the players left-to-right from highest to lowest hitting percentages.

The ideal is for the tallest (leftmost) bars to also be the widest. That means the players with the highest hitting percentages (i.e., the most proficient) are also getting the most attempts. Here's how the four teams (listed in order of national ranking) stack up, heading into the Big Four event (you may click on the graphics to enlarge them)... 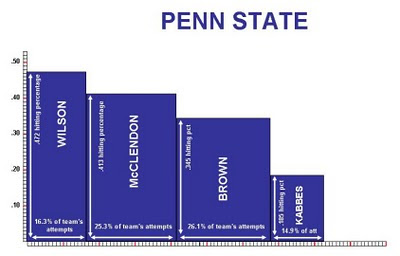 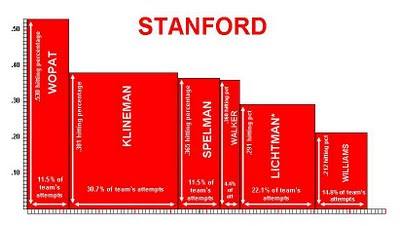 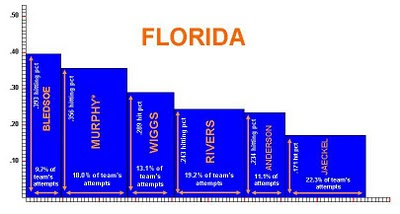 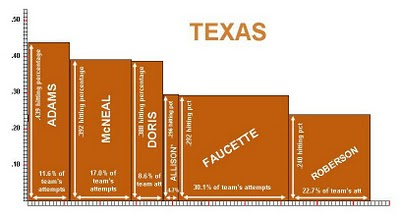 Penn State is unique in getting such a large proportion of its swings from just four players. Beyond that, however, the Nittany Lions successfully limit the number of hit attempts by their weakest attacker (in terms of hitting percentage). Penn State's article archive and stats page are excellent resources on the team.

Stanford does a good job of getting 6-foot-4 senior outside hitter Alix Klineman a lot of attempts, but might benefit from getting 6-2 frosh middle blocker Carly Wopat more sets.

Florida was, of course, led in its opening-weekend victory over Nebraska by hitting/setting double-threat Kelly Murphy, a 6-2 junior. Murphy continues to hit well and see a large share of sets in her direction. Lauren Bledsoe, who last weekend hit .533 (10 kills and 2 errors in 15 attempts) against 15th-ranked Colorado State and .625 (5-0-8) against Bowling Green State, now leads the Gators in hitting percentage. Tangerine Wiggs, who hit .833 (5-0-6) in the BGSU match and .500 (5-1-8) against Albany, has also improved since the Nebraska match. Gator stats are available here.

Finally, we have Texas, last year's national runner-up to Penn State and the only team in the Big Four to have lost a match this season (to Illinois, who is now ranked No. 3). The Longhorns' graph above appears to show the undesirable pattern of the most hit attempts going to players who do not have the highest hitting percentages (wide bars on the right). One of the players in that category, however, is senior outside hitter Juliann Faucette, a highly decorated All-America and All-Big 12 player. Faucette doesn't appear to be off to as hot a start as some of the other players, but her current hitting percentage of .292 is perfectly respectable.

Penn State, with its active 108-match winning streak, opens with Florida in the Big Four. This contest is a rematch of when the Lions and Gators met in last year's NCAA Sweet Sixteen round, a three-game sweep for Penn State (article, box score). Of note is that Penn State completely neutralized Florida's Murphy in this match, holding her to a .000 hitting percentage (2 kills, cancelled out by 2 hitting errors, in 12 attempts).

Other Notes:   Dave Reed's ESPN.com women's volleyball column is back again this season. That's where I found one of the preview articles cited above and other miscellaneous pieces of information, including the following... You've probably heard of Sunday Night Baseball, Monday Night Football, and Friday Night Lights (high school football). Now make room for Wednesday Night Volleyball on ESPN-U, the schedule for which is available here. Most of the Wednesdays will feature doubleheaders! These telecasts will offer great opportunities for volleyball stat-heads (leatherheads?) to keep our own statistics and conduct analyses.
at September 09, 2010 No comments: