UCI was even more dominant on paper, as the Anteaters outblocked and outhit the Cougars by wide margins. At the net, UCI prevailed 17-6 in total team blocks (block assists divided by two, plus solo blocks). Whereas the Anteaters' Colin Mehring was the nation's top blocker on a contending team this season by my calculation, it was his teammate, junior middle-blocker Scott Kevorken, who stepped up in the championship match with one solo block and 11 assists. 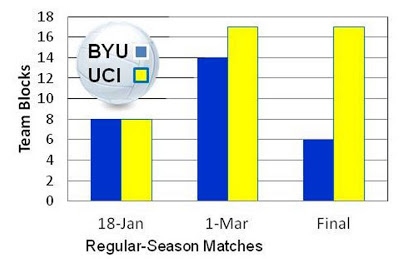 UCI's blocking prowess was the story of the match, all the way down to the final points. The Anteaters trailed 24-21 in Game 3, meaning the Cougars had three set points. However, Irvine ran off five straight points to win 26-24, the last three all coming on blocks!

BYU OH Taylor Sander, Mountain Pacific Sports Federation Player of the Year and first-team All-America, hit .308 on the night (20-8-39). However, six of his eight hitting errors resulted from being blocked. The Cougars' highly touted frosh opposite Ben Patch had a rougher night (7-5-22, .091), with four of his five hitting errors due to being blocked.
at May 05, 2013 No comments:

The Net Set offers some fairly statistically oriented previews of the Loyola (Chicago)-UC Irvine and Penn State-BYU semifinal matches of this year's NCAA men's Final Four.
at May 01, 2013 No comments: