Once again this year, Vinnie Lopes, operator of the "Off the Block" men's college-volleyball blog, invited me to be a judge for his site's Blocker of the Year award, as well as another award, new this year, for best server.

As seen in this previous posting, I created an elaborate system for determining my vote for 2011 Blocker of the Year. The NCAA compiles the statistic of blocks per set (or game), but I had a few quibbles with that. First, players can commit blocking errors (e.g., touching the net) in addition to successful blocks, so I thought errors should be subtracted from successes (akin to how hitting percentage subtracts hitting errors from kills). Also, a set is not a very fine-grained unit, as a game that goes 25-23, for example, provides greater opportunity to amass blocks (and other statistics) than one that goes 25-13. Therefore, I use total points in a given match as the denominator for my statistic. This year, to save some time, I revised my procedures in two ways relative to 2011:
The most recent national rankings I could locate listed BYU, UC Irvine, UCLA, Long Beach State, and Pepperdine, in that order, as the top 5 teams. All are from the Mountain Pacific Sports Federation (MPSF). NCAA individual leaders in blocks per set were obtained here. Top blockers (as of last week) who are on a top-5 team include:

The following graph (on which you may click to enlarge) shows the results. Above each player's name, vertically, are his blocking performances against relevant opponents. These numbers tend to be low, given that a player's blocks minus blocking errors typically will yield a number from 0 to 5, which then gets divided by the total number of points played in a match (often over 100 and sometimes even exceeding 200 for a tight five-gamer!). 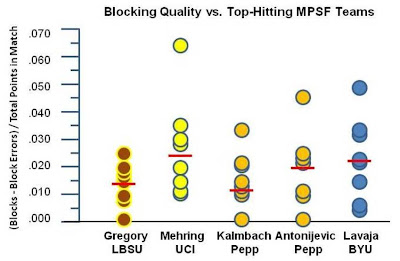 Even though Gregory had the best blocks/set among my five finalists, he did not fare that well under my elaborate blocking formula, recording values consistently between .000 and .024 against the best-hitting MPSF teams. The highest individual-match value was .064 for Mehring in UCI's second match against BYU. As seen in the box score from that match, Mehring had an unusually high 14 blocks (all assists) with no errors. There were 219 points in the match (a five-game come-from-behind win by the Cougars), yielding 14/219 = .064.

Even if one considers that match an outlier for Mehring, his median value (half of his matches above it and half below it; shown as a little red bar) exceeds those of his four competitors. Thus, in a close finish, my votes for Blocker of the Year are:

Turning our attention to serving, my starting point was the NCAA's aces per set statistic. As with blocking, using set as the denominator is not a sensitive measure of match length. That's the least of the problem with aces per set, in my view. The bigger problem is the statistic does not take into account service errors. A highly aggressive server (probably using a jump-serve) may get a lot of aces, but he or she will probably also amass a lot of service errors. Service errors cost a team an immediate point, so they are no trivial matter.

Indeed, if we look at the top 7 players nationally in aces per set (as of April 7), we see that nearly all of them have far more service errors than aces! (Service-error numbers can be obtained by going to the athletics website of a given player's school.)

Because USC setter Micah Christenson is the only player above who has close to a 1-to-1 ratio of service aces to errors, I give him my first-place vote for Server of the Year. I vote Joseph Smalzer of Loyola University Chicago 2nd, and Greg Herceg of Ball St. 3rd.

More refined analyses of serve proficiency are, of course, possible. One could look at a team's typical rate of scoring points on its own serve. Let's say a team scores on 40% of its serves (i.e., its opponents side-out 60% of the time). In other words, each time a team serves, on average, it scores .40 point. An ace, as an automatic point, increases the serving team's "yield" per serve by .60 (1 - its usual .40), whereas a service error (worth 0 points) decreases it by .40 (0 - .40). Such analyses were beyond my available time, however.
at April 14, 2013 3 comments:

New Article on Attack Speed by BYU's Fellingham and Colleagues

The latest issue of the Journal of Quantitative Analysis in Sports includes an article entitled "Importance of attack speed in volleyball" by Gilbert Fellingham, Lee Hinkle, and Iain Hunter of Brigham Young University.

The abstract (brief summary) of the article can be found here. According to this summary, the authors used high-speed photography to measure the time a set was in the air (to .01 of a second) in a number of men's collegiate matches. Set speed was then examined for correlation with kill probability. Quoting from the abstract:

...sets that traveled a further distance had significant increases in the probability of success with a faster set. No trends were seen with sets that were delivered to hitters that were closer to the setter.

A video on Dr. Fellingham's work with BYU's volleyball programs, this time with the women's team, is available here.
at April 07, 2013 1 comment: