Youth was served for Hawai'i, as frosh OH Nikki Taylor (10-1-18) and soph MB Jade Vorster (7-0-14) each hit .500 for the match, committing only one hitting error between them. Junior middle Kalei Adolpho added a .421 night for the 'Bows (11-3-19). The following graph shows each team's hitting percentage per game, with the winning team in each game listed at the bottom. You can click on the graphic to enlarge it. 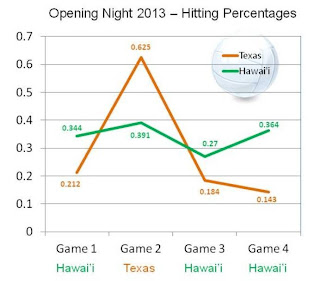 In Friday night's other marquee match (in my view), USC defeated host Purdue in four.
at August 31, 2013 No comments:

The 2013 women's college season gets underway today. ESPN "W" (for women's sports) writer Mechelle Voepel has a pair of articles (here and here) previewing the season, so I'll just add some brief remarks at this point. I've put together the following chart, showing the preseason polls for three major outlets: the American Volleyball Coaches Association, ESPN W, and Volleyball Magazine (you can click on each column heading to be taken to the full reports on the preseason polls). The polls are identical in their top three. Further, the same 10 schools appear in all three polls' Top 10.


Defending NCAA champion Texas, which returns front-court stars Haley Eckerman (outside), Bailey Webster (outside), and Khat Bell (middle), is the consensus preseason No. 1. The Longhorns' main loss from last year is versatile Sha'Dare McNeal, who hit .364 and recorded 2.41 digs per game as a senior last year, both second-highest on the team (on hitting percentage, I'm excluding a player with only 25 attempts all season). In addition, McNeal's 0.85 blocks per game were third on the squad. Texas opens up the season tonight at Hawai'i, in a match that starts after midnight for those of you in the Eastern and Central time zones.

Another interesting opening-night match features USC at Purdue. The Trojans return nearly all of their top players from a year ago, led by OH Samantha Bricio. The same can't be said for the Boilermakers, with Ariel Turner having moved on. Turner alone took 37% of Purdue's hitting attempts  a season ago (1622/4347); further, no other Boilermaker was within 1,000 spike attempts of Turner.

The summer of 2013 marks my 40th year of following volleyball. The following photo montage shows me in Israel in 1973, as I traveled with my father, a USA team organizer, to the Maccabiah Games, an international competition for Jewish athletes. Among the players pictured in action is Ed Becker, a  former UCLA star who was once mentioned in Sports Illustrated (in the middle, going from left to right, of the five USA players shown). 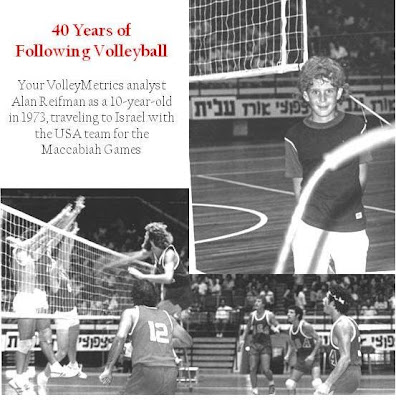 Further information on my volleyball background is available here. With next week's start to the NCAA women's season, I look forward to my 41st year of following the sport and my seventh year of analyzing and writing for this blog.
at August 23, 2013 No comments: