The Mountain Pacific Sports Federation (MPSF) men's tournament begins tonight, with the top eight finishers in the conference standings taking part. The winner of the tournament receives an automatic berth in the four-team NCAA tournament, along with champions from the Eastern and Midwestern conferences. The one at-large bid almost certainly will go to the best remaining MPSF team after the conference tourney, as selected by an NCAA committee.

To help predict the outcome of the MPSF tournament (and down the line, the NCAA championship), I'm using what I call my Combined Offensive/Defensive ranking. Its main feature is the ratio of a team's hitting percentage for the season divided by the hitting percentage it allowed its opponents. When teams come from different conferences (as in an NCAA tournament), I also apply a multiplicative weight to each team's ratio to represent strength of conference, yielding what I call the CACOD (Conference-Adjusted Combined Offensive/Defensive ranking). Because all teams in the MPSF tourney are from the same conference, there is no need to apply the weights.

The CACOD, which I introduced last fall for the NCAA women's tourney, was as successful as more-established ranking formulas at predicting the winners of the women's tournament matches.

In the table below, I show the COD values for the eight teams in the MPSF field, based on a statistics report from the league's website. Statistics were available for both the entire regular season and conference-only matches. The two would yield similar, but not identical, rankings when applying teams' own and opposition hitting percentages to obtain CODs. Whereas the conference-only stats might be best for predicting the conference tournament, the full-season stats might be best for predicting the outcomes of NCAA-tourney matches, especially since many of the MPSF teams played against top non-conference opponents such as Ohio State and Penn State during the season. 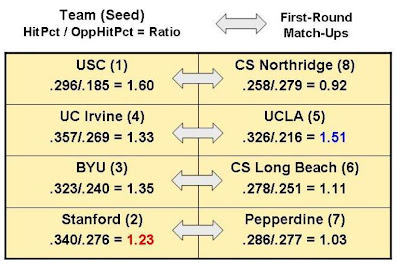 Based on the above COD rankings, No. 2 Stanford looks to be an upset candidate with its relatively low value (1.23) for such a highly seeded team. On the other hand, No. 5 UCLA (1.51) may do surprisingly well.
at April 21, 2012 No comments: