In baseball "sabermetrics," various statistics have been developed to quantify a player's contribution to winning games, such as Bill James's Win Shares. Other, related statistics incorporate a comparison to possible replacement players (e.g., Wins Above Replacement and Value Over Replacement Player).

Some of these statistics have been carried over into other sports (e.g., Wins Shares for basketball). However, to my knowledge, these kinds of statistics have not been developed for volleyball. Winning at volleyball encompasses many skills: serving, passing, setting, hitting, and blocking. There has not been enough volleyball statistical work, in my judgment, to attempt an all-encompassing metric analogous to Win Shares, WAR, or VORP at this time.

With the aim of eventually taking us toward Volleyball VORP (or some such term), I have decided to focus on one skill for the moment, the important ability to hit for kills without committing attack errors (hitting the ball out of bounds or getting blocked for an immediate point by the opponents). These aspects of attacking are, of course, operationalized in the formula for hitting percentage: (Kills - Errors)/Total Hitting Attempts. Hitting percentage is strongly correlated with winning, so this seems like a good place to start.

My new statistic involves taking a given player's hitting percentage and subtracting some reference value of hitting percentage (akin to that of an average replacement player), The resulting difference is then multiplied by 100. As an example, if a player ended up with a value of 5.0, it would mean that, per 100 swings for each player, the focal player's kill-minus-error number is five higher than the hypothetical reference player's. Stated differently, the focal player would generate five more kills per 100 hitting attempts than would a reference player (having subtracted hitting errors from each player's number of kills).

Because middle blockers tend to have higher hitting percentages than outside hitters, I conducted all analyses separately for middles and outsides (opposite/right-side hitters, who were not always distinguished on teams' roster pages, were combined with traditional outsides who hit from the left-hand side). Thus, the new statistic will evaluate middles in comparison to a reference middle blocker, and outsides in comparison to a reference outside hitter.

I chose the Big 12 conference (which only has nine volleyball-playing schools) for this first effort, as I am based at one of the schools (Texas Tech). Also, each team has played eight conference matches so far, marking the halfway point of league competition,*

To get at the "above replacement" aspect, I wanted to take the average hitting percentage of all players at a given position who did not start for their respective teams as the reference value. However, not all schools included matches-started totals in their statistics and, even if they had, there were not that many usable reserves out there. Many non-starting OH and MB players had very small numbers of total hit attempts, so I didn't want to use their hitting percentages. Imposing minimum criteria for inclusion, for which I settled on at least 20 Total Attempts in conference play or at least 40 TA for the entire season, the number of "replacement players" appeared to be small.

Below are the results. You'll notice that Haley Eckerman of Texas leads outside hitters with a +11.3 value. This tells us that, given 100 swings, Eckerman would generate 11.3 more kills (deducting hitting errors) than the average OH/OPP in the Big 12. Most of the results are not so dramatic. Many players will only get you an extra kill or two (or even just a fraction of one kill) per 100 swings, or lose you an equivalent amount.

Among the middles, the leader was Mia Swanegan of TCU. The Horned Frogs' volleyball statistics page does not list Total Attempts, but I inferred that she likely has had at least 20 swings in conference play, because she has 16 kills (and a .433 hitting percentage).

As usual, some cautions apply to these results. The quality of passing and setting is obviously not uniform across teams, so any player's value of kills added/lost would likely be different if she played for another school. Also, as noted earlier, a player who does not appear to add value through hitting may nevertheless do so through blocking, serving, or other skills. I will try to develop new measures of these skills (relative to average) in the future. At that point, an across-the-board Volleyball VORP may be within reach.

---
*The plan was to use only conference matches in the analysis, but only full-season statistics were available for Iowa State, Texas Tech, and West Virginia.
at October 29, 2014 3 comments:

UCLA had two players hit at least .400 on at least 20 spike attempts each, en route to a four-game win over Oregon. As shown in the box score, Karsta Lowe hit .473 for the Bruins, based on 33 kills and 7 attack errors on 55 swings, whereas teammate Reily Buechler registered a .429 hitting percentage with 13 kills and only 1 miscue in 28 attempts. I don't comprehensively track all matches nationally, but a team having two of its players reach the .400/20 mark in the same match appears to be pretty rare.

So much of a slugfest was this match that Oregon nearly matched UCLA's accomplishment. The Ducks' Martenne Bettendorf met the criteria (.500, 12-1-22), with teammate Naya Crittenden falling three hitting attempts short (.412 , 9-2-17).

All four of the above players hit from the outside, either as traditional outside-hitters who attack from the  left side of the front row, or as "opposite" hitters, who attack from the right side (the name deriving from being opposite the setter in the rotation). Middles tend to have higher hitting percentages than outsides, but middles get fewer hitting attempts, making it hard for them to join the .400/20 club.
at October 16, 2014 No comments:

This does not look like the statistics of a losing team in a match, especially when that team is Penn State, playing at home in State College. Yet, if you consult the box score of Saturday's match between No. 15 Illinois* and the No. 5 Nittany Lions, you'll find that Penn State most certainly did lose with the above stats. The Illini hit just a bit better than the Lions, .315 to .310, in pulling the four-game upset (26-24, 16-25, 25-23, 25-22).

The gaudy hitting numbers produced by Penn State in the early weeks of the season made only a cameo appearance vs. Illinois, with PSU putting together a .471 percentage in Game 2; the team's hitting percentage ranged between .250-.289 in the other three games. Frosh middle Haleigh Washington led Penn State with a .538 hitting percentage on 14 kills and 0 errors, on 26 swings.

Illinois's attack sparkled in Games 1 (.500) and 3 (.375). In the clinching Game 4, Illinois somehow managed to prevail with a .214 hitting percentage, compared to .250 for Penn State. According to the play-by-play sheet, the Illini's 25 points in Game 4 came from the following combination: 16 kills, 4 PSU attack errors, 1 PSU setting error, 2 Illinois service aces, and 2 PSU service errors. It took the Illini 42 swings to get those 16 kills in Game 4 (with 7 attack errors mixed in); these numbers suggest Illinois really had to grind out its final-game victory through a lot of long rallies. Junior OH Jocelynn Birks led the visitors, recording 19 kills and only 2 errors on 36 attacks, for a .472 percentage.

For No. 8 Nebraska, a problem of late has been closing out potential weekend sweeps. On Friday, October 3, the Cornhuskers opened a two-match homestand with a 3-1 victory over Penn State. The following night, however, Nebraska lost in five to Ohio State, the Huskers blowing a 14-11 lead in the final game.

Fast-forward a week to Friday, October 10. On this night, Nebraska again started the weekend off on a positive note, knocking off Michigan State, 3-1, in East Lansing. However, on the back leg of the trip in Ann Arbor Sunday afternoon, the Huskers could not even take a game against unranked Michigan. To be sure, the Wolverines (8-8 overall, 3-3 in conference) are improving with the return of senior setter Lexi Dannemiller, who missed the first month of the season. Still, a Michigan sweep of Nebraska would have to be considered a big upset, in my book.

The B1G is exhibiting a lot of parity this year. Along with the above examples, Ohio State followed up its win over Nebraska by executing a nearly identical fifth-game comeback against Illinois. I can see 11 of the conference's 14 teams -- Purdue, Wisconsin, Penn State, Ohio State, Illinois, Nebraska, Minnesota, Northwestern, Indiana, Michigan State, and Michigan -- either being shoo-ins or contenders for the NCAA tournament. Whether Northwestern and Indiana can keep up the pace remains to be seen.

---
*National rankings cited in this posting are from the October 6 AVCA poll.

In one of the marquee matches of this past weekend, the Washington Huskies upped their overall record to 15-0 with a comeback from two games down against UCLA. Scores were 18-25, 24-26, 25-17, 25-20, 15-10. With the hot hitting of 6-foot-4 senior OH Karsta Lowe pacing the Bruins this season, I was curious how well she attacked in each of the five games vs. the Huskies.

Lowe hit an uncharacteristically low .143 for the entire match, with 28 kills and 19 attack errors on 63 swings. Particular players' game-specific hitting percentages are not available from standard box scores, but play-by-play sheets, such as the one for UCLA-UW, can at least give us a player's kills and hitting errors by game (only final dispositions of plays are listed, so spike attempts kept in play don't appear). As shown in the following chart, I used the play-by-play to tabulate Lowe's kills and attack errors in each of the five games (you can click on the graphic to enlarge it).

Not surprisingly, Lowe's kills well outnumbered her errors in the first two games, won by the Bruins. Counter to expectation, however, the same pattern continued into Game 3, which the Huskies won. In the final two games, won by Washington, Lowe's errors exceeded her kills.

In no way is this posting intended to blame Lowe for the UCLA loss. Hitting is only the final product of a sequence that flows from passing and setting. Also, Washington likely made defensive adjustments after the second game that curtailed not just Lowe's, but other UCLA players' hitting effectiveness, as shown in the next graph. 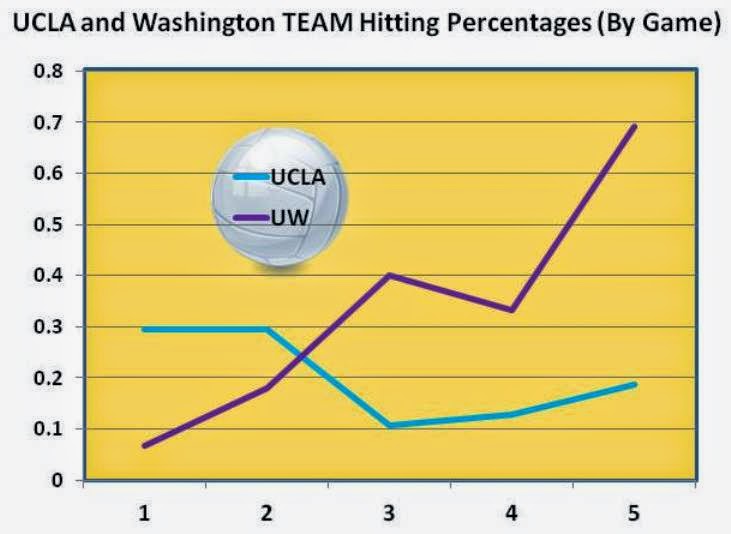 Finally, the Huskies' hitting effectiveness rose dramatically after Game 2. This suggests that the Bruins' defense was as much, or more, of a problem, relative to their offense, as the match started slipping away.
at October 08, 2014 No comments: