My last posting, on the Final Four teams' success rate this season in five-game matches, turned out to be useless for the semifinals, as neither match went the distance. Maybe tonight's final will...

Things haven't exactly gone as expected. The vaunted Big 10 conference (abbreviated B1G), which had the three highest national seeds -- Nebraska, Minnesota, and Wisconsin -- has no finalist. Also, this year will be the first in the six years I've compiled my Conference-Adjusted Combined Offensive-Defensive (CACOD) measure that a national title winner will be below a score of 1.94. The two finalists are close though, Stanford at 1.91 and Texas at 1.79.

I found Stanford's four-game semifinal win over Minnesota surprising, but the Cardinal had defeated the Gophers, also in four, way back on August 28.

My reaction to the other semi, which also involved a rematch from the regular season, was: What the hell happened? Defending national champion and this year's No. 1 national seed Nebraska had not merely swept, but routed Texas (25-15, 25-16, 25-21) on August 27. In the national semis, however, the Longhorns returned the favor, sweeping the Huskers!

Certainly, improved defense was a major for the Longhorns' turnaround. UT let Nebraska hit .304 in the teams' first match (with only 5 total blocks for the Horns), whereas Texas held the Huskers to .182 in the rematch (with 10 blocks).

Offensively, Longhorn frosh outside-hitter Micaya White struggled mightily in the first Nebraska match (hitting in negative territory, -.143, with 3 kills and 6 attack errors on 21 attempts). However, she improved to a solid, if unspectacular .269 (7-0-26) the second time around.

Another key player for Texas tonight will be fellow OH Ebony Nwanebu. She hit .378 (15-1-37) in Thursday's semifinal match and .333 (13-3-30) in the early-season match against Nebraska. Although now based in different conferences, Nwanebu and Stanford should be pretty familiar with each other. The reason, as close followers of the women's college game are aware, is that Nwanebu began her career at Stanford's Pac-12 rival USC, before transferring to Texas after her sophomore year. As the following chart shows, Nwanebu had some big matches as a Trojan against Stanford and generally committed few hitting errors. Stanford combines a very youthful line-up (perhaps a reason for the team's slow start this season) with the experience of Inky Ajanaku, a fifth-year middle-blocker who missed last season with an ACL injury. Ajanaku finished sixth in the nation in blocks per game at 1.52. This article describes Ajanaku as the "grandma" of the team, noting also that she's a "wannabe orthopedic surgeon."

The big question, then, is whether the title will go to the wannabe or the Nwanebu.

With this year's NCAA women's tournament getting underway today (brackets), I'm back with my Conference-Adjusted Combined Offensive-Defensive (CACOD) measure to forecast teams' success. The CACOD simply divides a team's own hitting percentage during the regular season by the overall hitting percentage it allowed its opponents, and then multiplies the resulting ratio by an adjustment factor to reward being in stronger conferences (details here). Teams that hit well and don't allow their opponents to do so will get the highest CACOD scores. 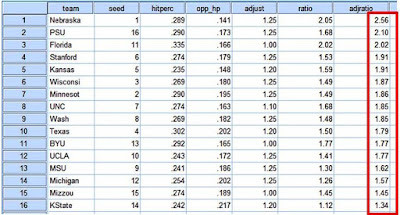 We'll see how well the CACOD performs as the games get underway!
at December 01, 2016 No comments: