Olympic volleyball is now under way, both of the indoor and beach varieties. Most of my writings over the next two weeks will probably be on the indoor game. Suggestions for analyses to conduct are welcome. Simply use the Comments link at the bottom of this posting.

Looking back at the August 2008 archives that include my analyses of the Beijing Games, we see the specific skills that were most correlated with winning in men's and women's indoor pool play (where we have large numbers of matches). By correlation, we mean that the higher a team ranks in a given statistic (e.g., hitting percentage, blocks per set), the higher it will also rank in the win-loss standings. 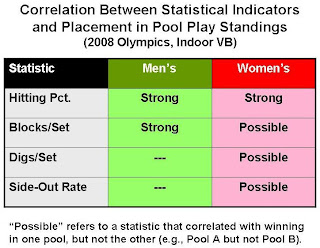