I've added a chart (on which you can click to enlarge) providing a statistical summary of the just-concluded men's indoor Olympic pool play, to go along with the one for women's pool play (entry immediately below). 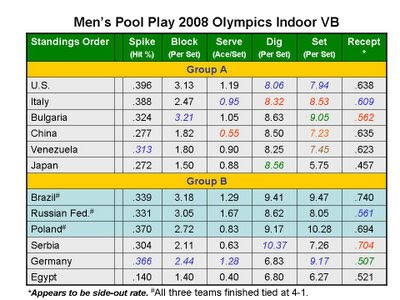 It should also be acknowledged that the meanings of some of the statistics are ambiguous. One example is digging. As I noted in a posting last October, the AVCA definition of a dig is "when a defensive player keeps a bona fide attack in play with a pass." Digging an opponent's spike attempt is good, but it may reflect some weakness in the defensive team's blocking, as balls would be getting through to the backcourt.
at August 18, 2008 No comments:

With pool play now complete in the Olympic women's (indoor) volleyball competion, I've created a table (below) to let readers see how the final standings in each of the two pools (first through sixth place) track with how the teams have ranked thus far (before medal play) in six statistical performance areas. (You can click on the table to enlarge it.) 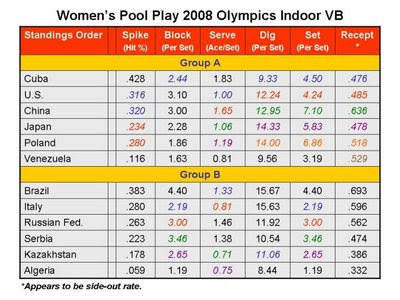 Discrepancies are shown in color fonts (the specific colors don't really mean anything, they're just used to draw attention to the numbers). For Group A's win-loss standings and hitting percentages, the discrepancies were relatively minor. As shown in blue, the U.S. finished ahead of China in the standings (second vs. third), but the Americans had a slightly lower hitting percentage than did the host nation. Japan and Poland (in red) also exhibited a similar reversal.

It looks to me like China's third-place finish in the Group A standings may be somewhat of an underperformance, relative to the team's rankings in the statistical categories. It should be noted, however, that China's two losses were each in tight, five-game matches. Eight teams make the medal playoffs, so China will still have a chance to win a medal.

One final note on data quality: Though the availability of statistics seems to have improved over time, there are still serious shortcomings. For some statistics on the NBC website, a team's line of data is missing (although I was able to use other statistics to derive the missing ones). There are also plenty of apparent typos. For example, in serve-receipt, the categories of "success," "faults," and "continuation of play," do not sum to the number of attempts, for some teams.
at August 17, 2008 No comments:

The NBC Olympics website is now providing extensive (indoor) volleyball statistics -- hitting, blocking, serving, digging, setting, and receiving. Further, hitting percentage is now being calculated correctly (subtracting errors from successful kills, before dividing by attempts). Clicking here leads you to men's statistics at the team level, but from that page you can click on a heading to get to women's statistics, as well as varying whether you get team or individual statistics. Pool play ends this weekend for both men and women; upon conclusion of this stage of the competition, I'll present some analyses of how the pool winners did in the various statistical categories.

Statistics are available in a similar format for men's and women's beach volleyball, but there seem to be a lot of holes in the numerical information provided. There's already been a lot of excitement for the U.S. teams in the sand, as the legendary women's duo of Misty May-Treanor and Kerri Walsh had a first-game scare on Thursday against a Belgian team, whereas the men's pair of Phil Dalhausser and Todd Rogers eked out a three-game victory over a Swiss combo last night (U.S. time).
at August 16, 2008 No comments:

NBC's late-night Tuesday/early-morning Wednesday Olympic coverage featured a women's (indoor) volleyball match between the U.S. and Venezuela, ultimately won 3-1 by the Americans. Thus far, I've found announcers Paul Sunderland (a member of the 1984 U.S. men's gold-medal team) and Kevin Barnett (an Olympian of more recent vintage) to be informative on strategy and statistics.

As Game 4 got underway, Barnett (I believe, rather than Sunderland) asserted that U.S. blocking (7 in Game 3 alone) and Venezuela's poor serving (1 ace compared to 12 errors, through three games) were the "dictating statistics of this match." According to the final box score, the Americans indeed outperformed the Venezuelans in blocking, 16 to 6. Jen Joines, who entered the match in a substitute role for the U.S., was singled out for accolades by the announcers.

The announcers also stressed the importance of playing "in system." By this, they mean consisent, quality passing to the setter, so that she can have the maximum possible options in deciding which hitter to set. U.S. passing difficulties, both on serve reception and on free balls, were described as the "single greatest thing that's going to hold this team back in this tournament," again according (as best I could tell) to Barnett.
at August 12, 2008 No comments:

With the Summer Olympics underway in Beijing, I would like to welcome everyone to VolleyMetrics, where I'll be presenting statistical analyses of several of the volleyball matches and taking comments from interested viewers. Before starting, I would like to offer condolences to the Bachman and McCutcheon families for the tragic attack that took place earlier.

First, for results and boxscores of (indoor) volleyball, you can go to the following link (I may add in some postings on beach volleyball, I'm not sure):

As some of you may have seen this morning on television in the U.S., the American women opened up with a 3-1 victory over Japan. The boxscore for this match is available here.

Two of the major topics I have emphasized on this blog are hitting percentage and defending against opponents' hitting via blocking and digging.

If you look at the boxscores provided through the NBC Olympics website, you'll see that hitting percentage, as traditionally defined by volleyball statisticians, is not provided. The raw ingredients to calculate it, however, do appear to be present.

In the U.S.-Japan boxscore, just on top of the individual-player statistics, you'll see that for the aggregate team statistics, only the countries' successful spikes ("S") or "kills," and attempts ("A") are shown, and then the ratio of the two. That, of course, leaves out hitting errors, which count negatively against a player or team in the usual hitting percentage statistics.

Once you scroll down to the individual-player statistics, however, you'll see that in addition to successes (SUCC) and attempts (ATT), you get "FLTS" (which I interpret as faults or errors) and "CONT" (which I interpret as playing continuing, without the spike attempt immediately helping or hurting the attacking team). Note that for each player, SUCC + FLTS + CONT always adds up to ATT. From this part of the boxscore, therefore, we can add up all the players' FLTS numbers and get a team error total, which can be used along with the team success and attempt numbers higher up in the boxscore.