This year, I'm introducing a new feature. Beginning with today's preview of the upcoming women's season in the Big 10 (which actually consists of 12 teams, including newcomer Nebraska), I will preview a different major NCAA Division I conference each week (roughly), leading into the season.

The Big 10 seems like a good conference to begin with, as the league not only produced last year's national champion, Penn State, but six additional schools that made the round of 16 or better (Purdue, Illinois, Ohio State, Indiana, Minnesota, and Nebraska). Plus, I went to graduate school at Michigan (which will be evident below from my lengthy preview of the Wolverines!) and have taught a couple times as a visiting professor at Wisconsin.

As seen in the following chart, I start by looking at each school's returning and non-returning statistical leaders from last year, in the categories of hitting, blocking, and digging. To define success as an attacker, I look not only at a player's hitting percentage (which I generally restrict to .250 or higher), but also at whether she took a sizable proportion of her team's spike attempts (which I define, approximately, as 20% or more of a team’s attempts for outside and right-side hitters, and 15% or more for middle blockers).  Whether a team returns its starting setter (in a one-setter offense) or setters (in a two-setter scheme) is also noted. Below the chart, I further discuss each team, including its incoming players. 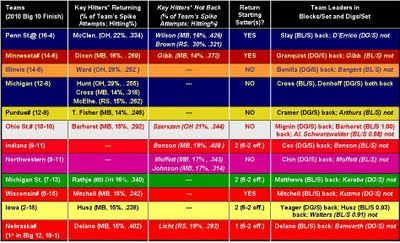 Unless you have amazingly good eyesight, you'll need to click on the chart (and possibly on the plus-sign magnifying glass icon that will appear next) to enlarge it. Information for each team is based on 2010 full-season statistics, unless noted otherwise (# indicates statistics are from conference play only, and @ represents statistics from a pre-NCAA-final press release). All players listed as AVCA high school All-Americans are first-team honorees, unless noted otherwise.

Minnesota and Illinois tied for second in the conference last year. The 2011 season promises to be one of great transition for MINNESOTA, as longtime coach Mike Hebert retired after last season and new coach Hugh McCutcheon will not join the team until after completing his stint with the 2012 U.S. women's Olympic team (McCutcheon also coached the U.S. men to an Olympic gold medal in 2008). Minnesota's interim coach will Laura Bush (not that one!). On the court, Minnesota loses hitting and blocking star Lauren Gibbemeyer, seen in her Senior Night ceremony last season. Notable returnees are MB Tori Dixon and Jessica Granquist, the top digging Gopher. Coming to the Twin Cities will be second-team high school All-America Morgan Bohl (6-0 OH).

Last year, ILLINOIS had to cope with the loss of All-America Laura DeBruler much earlier than expected, as the senior OH tore her ACL midway through the season, thus ending her collegiate career. Undaunted, the Illini fought on, making the NCAA Sweet 16 where they lost a five-game match to Texas on the Longhorns' home court. Colleen Ward, who began her Illinois career last year after transferring from Florida, returns in an outside-hitting role, with libero Jennifer Bonilla, a U.S. junior national team selection, roaming the backcourt. Two AVCA high school All-Americans will join the Illini, 6-2 OH Jocelynn Birks and 6-0 right-side Ali Stark.

MICHIGAN, which appeared on its way to a promising 2010 season after beating Minnesota and Illinois early in conference play, faded late in the season and was eliminated in the NCAA first round in a difficult match-up against Washington in Seattle. The Wolverines return all their key players -- except star setter Lexi Zimmerman, who also hit .253 on 458 spike attempts (11% of the team's attempts). Lefty Alex Hunt, a hitting threat from the front and backcourt, spearheads the Maize and Blue attack, along with Claire McElheny. Jennifer Cross, a 6-4 MB, lends hitting and blocking strength, whereas Sloane Donhoff leads in digging.

One of the leading candidates to succeed Zimmerman at setter is another Lexi, high school All-America Lexi Dannemiller, with junior Catherine Yager (who obviously would not have played much behind Zimmerman) also in the running, according to coach Mark Rosen. The Wolverines also feature sophomore OH Lexi Erwin. Apparently Michigan is the place to go if your name is Lexi! Another high school All-America coming to Ann Arbor is 6-2 MB Lauren Teknipp.

PURDUE is coming off what its athletics website terms a "breakout" season, in which the Boilermakers defeated Penn State in a conference match and swept then-No. 1 Florida in the NCAA tourney to advance to the Elite Eight. Two big senior losses from last year are Jaclyn Hart, a third-team All-America at setter, and MB Kristen Arthurs. MB Tiffany Fisher and defensive specialist Carly Cramer do return. Honorable mention All-America Valerie Nichol, listed as both a setter and hitter, joins the Boilermakers.

INDIANA and NORTHWESTERN have a lot in common. Not only did the two schools tie for seventh in the Big 10 last year with 9-11 records, but also both teams lose their top hitting and blocking talent from a year ago (three-time All-Conference player Ashley Benson for IU, and two-time honoree Sabel Moffett for Northwestern). One advantage for the Hoosiers is that they return both setters from a two-setter offense. The Wildcats will be bringing in second-team high school All-America DS/L Caroline Niedospial and honorable mention designee Hannah Crippen, a 6-0 athlete listed as both a setter and hitter.

MICHIGAN STATE, on the other hand, returns most of its team leaders, including All-Conference pick and top MSU hitter Jenilee Rathje. Plus, the Spartans add high school All-America DS/L Kori Moster. MSU was the highest-finishing Big 10 squad not to make the NCAA tournament last year, but the large cast of returnees would seem to give MSU a good chance this year.

WISCONSIN, a school that just a few years ago was making the NCAA Sweet 16 and Elite Eight and, going back a little further, the NCAA championship final, obviously fell on hard times last year. Hitting and blocking leader Alexis Mitchell returns, as does setter Janelle Gabrielsen. Also, the Badgers bring in a pair of second-team high school All-Americans, Crystal Graff (6-3 OH), a hometown player from right in Madison, and Deme Morales, who at 5-7 played MB in high school but apparently will be tried at DS for Wisconsin. We'll see if this year's team can give the (roughly) 4,000 fans per match who have long been coming to the old Fieldhouse something to cheer about.

Not surprisingly for a last-place team, IOWA did not have a lot of big hitters last year. Mallory Husz, who returns as a senior, led the Hawkeyes with a .238 attack percentage (excluding one other player who had a very small number of spike attempts), as well as in blocks/set. Leading digger Bethany Yeager, is one of two Hawkeyes involved with U.S. national team developmental squads, along with sophomore OH Rachael Bedell. Two high school All-America designees, second-team Alexandra Lovell (5-10 OH) and honorable-mention Erin Leppek (6-0 MB) will try to add to Iowa's offensive firepower.

Finally, we get to NEBRASKA, a new arrival from the Big 12 (-2), whose conference championship the Huskers won a year ago. Nebraska will not be strangers to the top Big 10 teams, having played many of them in recent years. From 2006-2010, the Huskers were 7-2 against Big 10 opposition (losing to Penn State in 2008 and to Michigan in 2009), while defeating Illinois, Michigan, MSU, and PSU once each, and Minnesota thrice (here are links to Nebraska's results from 2010 and earlier).

The Huskers ran a 6-2 offense last year with senior Sydney Anderson and [returnee] Lauren Cook sharing time at setter. They do have 6-foot-5 right-side hitter Morgan Broekuis, who also could play setter, but John Cook says they’ll likely go with a 5-1.

“We’re running a 5-1 right now,” Cook said. “We’re trying to get our six best players on the court is what we’re trying to do. We need Morgan to kill balls right now. We don’t have enough outside hitters to run a 6-2.”

Coinciding with my preview is a discussion thread on VolleyTalk, in which fans of Big 10 teams propose starting line-ups for their favorite squads. Here you can compare the statistical leaders I've identified above with fans' projections of different teams' starting units.
at July 25, 2011 No comments: