NCAA Women 2014: Wrapping Up the Regionals

My Conference-Adjusted Combined Offensive-Defensive (CACOD) measure successfully predicted the winners of 11 out of 12 matches in the NCAA women's Sweet Sixteen and Elite Eight.

All three other regionals went exactly as the CACOD predicted, with No. 1 Stanford, No. 2 Texas, and No. 5 Penn State joining BYU in advancing to the Final Four.

In a rematch of last year's national championship match, Penn State once again outlasted Wisconsin in four games (22-25, 25-16, 25-22, 25-19; box score) to win the Louisville regional. One thing I examined from last year's final was how each team won its points (i.e., percent from kills, aces, blocks, opponent service errors, etc.). A natural comparison, therefore, is how Penn State and Wisconsin won their points against each other in last year's final and in Saturday's regional final.

For the Nittany Lions, two differences were apparent. Whereas Penn State amassed 63.5% of its points in last year's final from kills, the figure Saturday against Wisconsin was 57.7% (i.e., the Lions scored 56 of their 97 total points with their own kills). In contrast, Penn State went from getting only 7.3% of its points from Badger service errors in last year's finals (7 of PSU's 96 points coming from Wisconsin serving miscues) to obtaining 14.4% of points last Saturday in this way (14 of the Nittany Lions' 97 points coming from Wisconsin serving errors). The percentages for all other point-scoring categories (e.g., blocks, aces) were pretty similar for PSU between the two matches. Overall, then, Wisconsin made things easier for Penn State in this year's regional final than in last year's national title match by giving the Nittany Lions 7 extra points on Badger serving errors, points PSU did not need to earn via kills.

Compared to last year's final, Wisconsin earned a slightly higher percentage of its points last Saturday from kills (53.7 to 49.5), but smaller share from Penn State service errors (9.8 to 13.2). Percentages in other categories were similar in the two matches.

For the second straight year, Washington failed to take advantage of playing in the university's home city of Seattle (last year's national semifinal vs. Penn State and, as noted above, in this year's Sweet Sixteen vs. Nebraska). The Huskies were led in recent years by outgoing senior outside-hitter Krista Vansant. Taking selected matches from this year's Huskies schedule, I looked at how well Vansant (in purple) and her teammates (collectively, in gold) hit in several key U-Dub wins and the team's three losses (shaded in gray). You may click on the graphic to enlarge it. 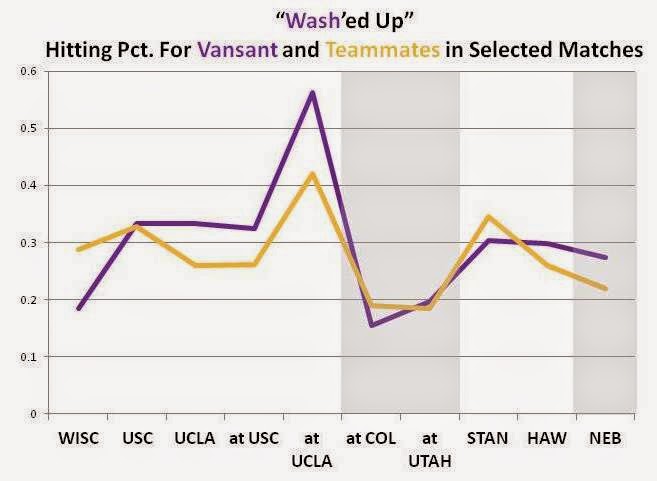 In the Huskies' losses at Colorado (Vansant .154, teammates .190) and Utah (Vansant .197, teammates .184), everyone struggled with their hitting percentages. Against Nebraska, however, things were a little different. Vansant hit a respectable .273, but her teammates collectively hit .219. In all the other matches graphed, which the Huskies won, the teammates had hit at or around .260, or higher.
at December 17, 2014 No comments:

The women's NCAA Sweet Sixteen begins tonight. Here are the match-ups, showing teams' scores on my Conference-Adjusted Combined Offensive-Defensive (CACOD) ratings. The team with the higher CACOD in a given match would be favored to win.


BYU would thus be the only lower-seeded team I would pick to win.
at December 12, 2014 No comments:

With play in the NCAA women's tournament bracket beginning tonight, I wanted to provide a few statistical tidbits in advance.

If there is one team whose players, coaches, and fans have a right to be upset with the seedings, it's Wisconsin. Last year's national runner-up to Penn State, the Badgers closed this season winning 19 straight matches and captured the Big 10 crown. But now, if Wisconsin is to get back to the Final Four, it will have to beat Penn State along the way, in the Elite Eight (barring an upset loss by the Nittany Lions in an earlier round).

As well as the Badgers have played this season (and the latter part of last season), Penn State has been Wisconsin's Kryptonite the past two years. In fact, PSU has won 12 of the 13 games it has played against Wisconsin in 2013 and 2014 (two 3-0 regular-season sweeps and a 3-1 win in the NCAA title match last year, and a 3-0 sweep in the teams' only meeting this year).

As longtime readers of this blog are aware, the way I like to evaluate teams heading into the NCAA tournament is by dividing a team's season-long hitting percentage by the cumulative hitting percentage it allowed its opponents during the season. I also multiply the result by a "fudge factor" (usually a little above or below 1.00) to reflect my impression of conferences' national competitiveness. Predicting the winner of a match by which team has the higher score on my simple measure has done about as well as more complicated algorithms in forecasting NCAA tournament results (here and here). The formula is shown here.

For the top eight seeded teams in the 2014 NCAA women's tournament, here are their scores:

Here's another note about Penn State: Following up on a midseason posting, the Nittany Lions successfully finished the season as the only major team in the nation to score at least 20 points in every game this season (excluding fifth games). PSU lost three matches this season, as well as one or two games in some matches it won. But even in losing games, the Nittany Lions never dropped below 20 points. Since I last posted on the topic, Penn State lost only two more games (at Purdue), but scored 23 and 22 points in them. To me, this shows that PSU sticks around in every game and never makes things easy for an opponent.

Recent history suggests no need to raise the SEC's strength factor from its current 1.00. Last year, for example, two highly seeded teams from the conference, No. 4 Missouri and No. 5 Florida, each exited in the second round of the NCAA tournament.
at December 04, 2014 No comments: