As most people looking at this blog would already be aware, the University of California, Irvine (UCI) defeated the University of Southern California (USC) in an exciting five-game NCAA men's championship match last night. Adding to the drama and excitement was the story of the Trojans' late-season turnaround, from a fifth-place finish in the Mountain Pacific Sports Federation, to a juggernaut that swept through the MPSF postseason tournament to capture an automatic bid in the four-team NCAA tournament and overpowered Penn State in the national semifinals.

The reason for USC's recent success was no secret -- it was killer hitting, especially by 6-foot-8 sophomore Murphy Troy. Whether Troy was in the front row or back row (where a player can still hit, as long as he takes his jump from behind the 10-foot line), USC would frequently set the ball to him, and Troy would deliver. Troy's hitting statistics in SC's last five matches, in terms of number of kills and hitting percentage were as follows: 28/.380 vs. Stanford, MPSF; 19/.600 vs. UCI, MPSF; 23/.220 vs. Pepperdine, MPSF; 24/.595 vs. Penn State; NCAA; and 26/.367 vs. UCI, NCAA.

Among the tactics an opposing team could try against a hot-hitting team, two would be tough serving (to disrupt the passing to the setter, and perhaps the sets to the hitters) and finding a way to block better than you ever have, by getting two (or even three) players up against the opponent's top hitters.

As shown in the following chart of key statistics from USC's postseason matches (which you can click to enlarge), the high rate of service errors by Trojan opponents suggests that they may have been opting for the aggressive serving tactic. Penn State, with 21 such errors in only four games, stands out in this regard (although the elevated altitude in Provo, Utah, which would cause the ball to carry further, also could have been a factor). 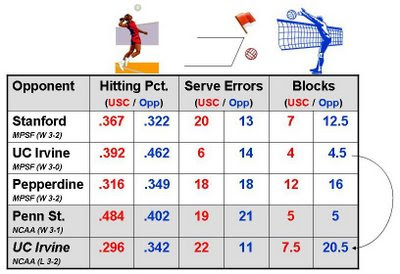 I've read several online articles this afternoon about last night's match, but I haven't been able to find any quotes from UCI Coach John Speraw regarding strategies he employed so that his team's block could be so effective against USC. The best I could find was: "We did a much better job of taking away their tendencies" (from a list of postgame quotes on the UCI athletics site). Comments from any "X's and O's" people would be welcome!
at May 10, 2009 No comments: