This wasn't supposed to happen, at least according to the preseason AVCA poll, which had USC at No. 22. In fairness to the voters, the Trojans had were coming off a weak 16-16 record last season and were losing two transfer players, Ebony Nwanebu (to Texas) and Lauryn Gillis (to Wisconsin). It should be noted, however, that Nwanebu and Gillis did not put up great hitting percentages for the Trojans a year ago (.226 and .174, respectively).

Thus far in 2015, USC is playing lights-out both offensively and defensively, in terms of hitting percentage (you may click on the following graph to enlarge it). 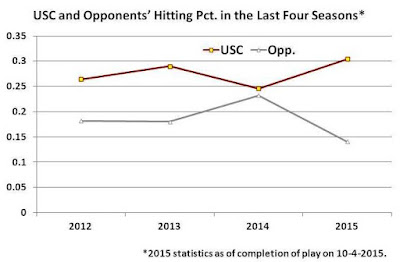 The Trojan offense is led by a trio of upper-year players. As shown in the following table, senior outside-hitter Samantha Bricio is taking a huge number of attack attempts and hitting at an excellent .323 clip, with middle-blockers Alicia Ogoms and Elise Ruddins hitting at .419 and .412, respectively. (OH is considered a more difficult position than MB for attaining a high hitting percentage, as an OH tends to get a higher number of "desperation" sets when a team is out of system.)

After crushing Nebraska in the first game, 25-12 and eking out a 26-24 win in Game 2, top-ranked and previously undefeated Penn State not only lost the next three, but never really threatened to close out the match. The Cornhuskers' winning margins in these final three games were 25-14, 25-20, and 15-11 (box score).

While Nebraska hit pretty well in the third and fifth games, the big story in my view was the decline in Penn State's hitting. In the final three games, the Nittany Lions hit .059, .083, and .100. I don't know the last time Penn State hit .100 or below in three games of the same match, but I would imagine it was a long time ago! 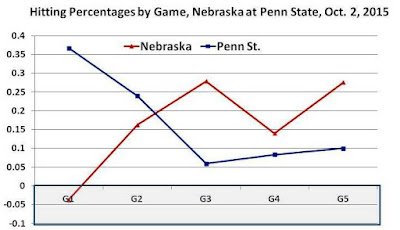 Nebraska couldn't maintain the momentum from its win at Penn State, however, losing in five the next night at Ohio State. The Huskers are now 12-2.
at October 04, 2015 No comments: