Getting a side-out (or siding-out) refers to winning a rally on the opponent's serve. Back when the rules specified that a team could score a point only on its own serve, the importance of a side-out was that it earned a team the right to serve. Then, with the switch several years ago to rally scoring -- where the winning team of each rally earns a point, regardless of who served -- siding out was worth an immediate point, along with giving the serve back to the team that won the last rally.

Aside from the scoring aspect, success at siding-out can also be seen as a marker of a team's proficiency at running its offense, which the receiving team gets the first chance to do. Side-out rate can tell us how well, by and large, a team receives serve and passes the ball to the setter so that he or she can make a good set to the chosen hitter, and with what success the team's hitters put the ball away. I say "by and large," because other factors will affect a team's side-out rate, such as the other team's rate of service errors and the receiving team's ability to win long rallies beyond the initial attempted attack.

Further, looking at the side-out success achieved by one's opponents may shed light on the effectiveness of a focal team's ability to block against the opponents' serve-receipt attack.

Tracking teams' side-out rates (and the side-out rates they allow their opponents) may therefore provide a valuable perspective in performance evaluation. I have gone ahead and charted the side-out statistics for one team in particular, the University of Michigan. I have been a Wolverine volleyball fan since my graduate-school days at the U-of-M in the mid-late 1980s, though in recent decades I've been following the team much more over the Internet than in person. With Coach Mark Rosen's squad having just completed the first half of its Big Ten schedule with a 6-4 record (18-4 overall at this point), now seemed a good time to probe the matter of side-out rates (click here for the Wolverines' schedule/results page).

In the plot below (which you can click to enlarge), each W or L indicates whether or not the Wolverines were victorious in a particular game (also known as a set), with the W/L located at the intersection of Michigan's side-out success rate and the opponent's. The color codes represent the opponent. Of necessity, the team that achieves a higher side-out rate in a game will win the game. 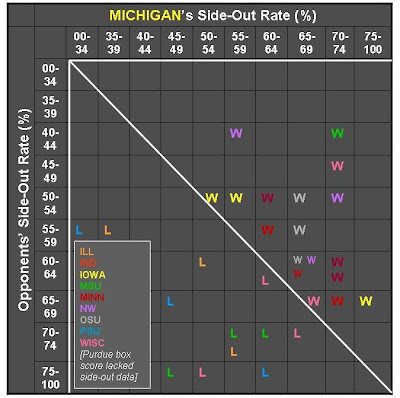 Various nuggets can be gleaned from this grid. For example, when Michigan has sided-out with 65-69% success, it has won 6 of 7 games (the only exception being when Wisconsin sided out at a 70% clip to Michigan's 65% in Game 3 of the teams' match in Madison).

If you would like to conduct a similar analysis for your own favorite team, please e-mail me via my faculty webpage (see link in the upper-right corner) and I'll send you my PowerPoint template.
at October 26, 2008 No comments:

Competitive balance continues to grow within Pac-10 women's volleyball. Stanford, Washington, UCLA, and USC have been national powers over the last several seasons and beyond. Cal made the Final Four last season and is doing well this season, and Arizona has made some noise in the past.

This weekend, the two Oregon schools gave notice that they shouldn't be overlooked, either. The University of Oregon knocked off both UCLA (Friday) and USC (Saturday) in Eugene, allowing only a single game (or as they now call it, "set") in the two matches combined. Oregon State, playing in Corvallis, likewise beat USC, but lost to UCLA, albeit in five games.

What really caught my attention for purposes of this blog, however, is the statistical inclination of the person who writes about volleyball for the UO's GoDucks.com athletics website. As seen in this article on the Oregon-USC match, the writer zeroes in on the huge difference between the teams' hitting percentages and uses comparative statistics from the rest of the season to put last night's figures in perspective.
at October 05, 2008 1 comment: