Back in August, the U.S. took Olympic gold in women's (indoor) volleyball for the first time. It was quite a transformation for the American squad, whose sometimes shaky performance in pool play gave way to dominance in the medal round. I like to take some time to reflect on a competition, make some graphics, and then write up an analysis. Three months is a long time, but it's just been a busy year. However, I'm finally ready to present my analysis!

To illustrate how the U.S. women upgraded their performance between the pool and medal rounds, I've created the following graphic of their game-by-game point-differentials throughout the tournament, on which you can click to enlarge. 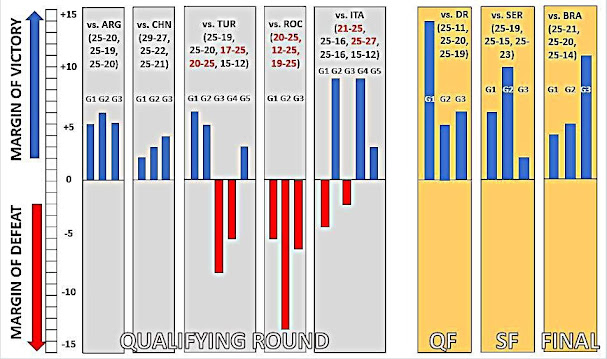 Each game of each match is shown from left to right. In its opening match against Argentina, the U.S. won in a sweep, with margins of 5, 6, and 5 points in each respective game. Hence, victorious games appear as blue bars, greater height reflecting more decisive wins. Skipping to the third match, vs. Turkey, the U.S. took the first two games, lost the third and fourth (shown as red bars, the greater the drop-down, the more decisive the loss), but rebounded for a 15-12 win in the fifth. Next came a blowout loss to the Russian Olympic Committee, and then a two games to one deficit vs. Italy, which the U.S. overcame to win in five. During one stretch, the U.S. dropped seven out of nine games, some by large margins (where all the red is).

This hardly looked like a team poised to win the gold, especially in as dominant fashion as it did! Once the medal round began, however, the U.S. recorded three straight sweeps, by an average of 7 points per game. Readers of this blog will know that the first place I always look is hitting percentage, both that amassed on offense and that allowed defensively. Here are the hitting percentages from the U.S. matches... 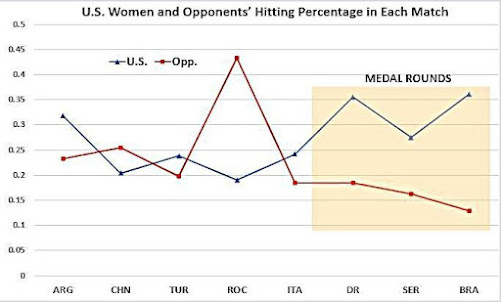 In its pool-play matches (Argentina, China, Turkey, ROC, and Italy), the U.S. didn't dominate anyone in hitting percentage. The only domination was by the ROC over the U.S. That all changed in the medal round. After hitting for the most part between .200 and .250 in pool play, the U.S. ranged between roughly .275 and .350 in the medal round. In addition, the Americans started holding their opponents below .200.

The Olympic scoresheets (which no longer seem to be available online) contained a lot of potentially valuable information. As shown below, I gravitated toward three statistics, which I charted...

What about digging of opponents' spike attempts (defined as "excellent" digs over total attempts)? Not much there either, other than a really good digging match vs. the Dominican Republic in the quarter-finals.

Finally, we have scoring blocks (defined as [points scored via the block - blocking errors]/total blocking attempts). Now, in each of its matches, the U.S. committed more blocking errors (primarily net violations) than it scored points directly via the block, leading to consistent negative values on this statistic. However, the statistics became less negative as the U.S. entered the medal round. It seems anticlimactic to conclude that the key to the American' historic gold medal was blocking for points and staying out of the net while trying to do so, but that is what these data seemed to suggest.

Perhaps, I thought, this was merely a fluke correlation between the blocking statistic and the U.S. team's success. I initially planned to examine the statistics of every women's volleyball match of these past Olympics (not just the U.S. matches) to see if teams with blocking statistics not far below zero tended to do well. However, as I was falling behind in writing up this analysis, I decided to examine only a subset of matches.

As we academics like to say, further research is required to establish the reliability of these findings. Still, there really may be something going on here.