Playing in Omaha, not far from the school's Lincoln campus, the University of Nebraska swept the University of Texas, 25-23, 25-23, 25-21, to win the Cornhusker program's fourth NCAA title (the third under current coach John Cook) on Saturday, December 19. Here's a link to the box score and play-by-play sheet.

As shown in the following graph, Nebraska outhit Texas by a substantial margin in each game. Yet the games were tight (especially the first two). The Huskers were called for three "assist errors" (perhaps the setter backing into the net or contacting the ball above the net when starting out from the back row) and one ball-handling error for the match, whereas the Longhorns were called for none of either, thus giving UT a four-point advantage in that department and negating some of NU's hitting edge. 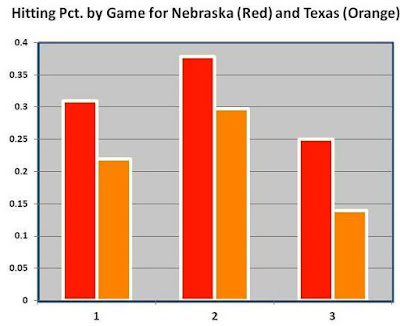 Pacing the Husker hitting attack were outside-hitter Mikaela Foecke (.385 percentage, based on 19 kills and 4 errors, on 39 swings) and middles Amber Rolfzen (.625, 10-0-16) and Cecilia Hall  (.500, 7-2-10). Hall's take on the situation, as reported in this Lincoln Journal-Star article, was that, “Mikaela just pulled their block away, and that made it easy to get kills,”

The following ESPN graphic (of which I took a screenshot) shows the Longhorns' serve-receipt woes, which forced setter Chloe Collins to frequently deliver her sets from non-advantageous spots on the floor (shown as the dots, within the area within the imaginary blue arc being optimal). As television analyst Karch Kiraly put it, Collins often had to "put on her track shoes." For whatever reason, ESPN couldn't get Nebraska's spatial statistics to show up. 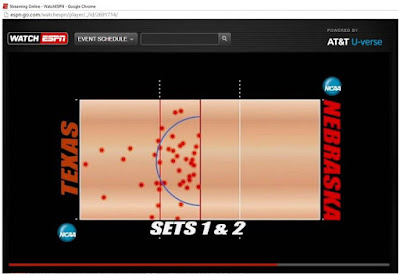 Of UT's two leading middles, Molly McCage (.429, 7-1-14) acquitted herself well, but Chiaka Ogbogu had as many hitting errors as kills (4 each) on 15 attempts, yielding a .000 percentage. One Longhorn who was not fazed by the team's erratic passing was frosh outside-hitter Yaasmeen Bedart-Ghani. In the championship match, she hit .500 (11-1-20), following up on a .583 (15-1-24) performance in the semifinal against Minnesota.

My Conference-Adjusted Combined Offensive-Defensive (CACOD) forecasting tool once again did well, even though none of the top-three-ranked teams on the CACOD (Washington, USC, and Penn State) made the Final Four. For each of the tournament's 63 matches, the team with the higher CACOD won 51 times and lost 12.

As shown in this summary of the VolleyTalk discussion board's Pick the Winner contest, someone correctly picked the winners of 54 matches. This is particularly impressive, in light of the following procedural aspect:

The PTW contest results... are based on the teams chosen before any of the games have been played and are not updated to show the actual teams playing in rounds subsequent to the first one. So if a high seed and consensus final four team is eliminated in the first round, anyone who picked that team for the following rounds automatically loses. On the other hand, RichKern... calculate[s] results a different way. RK looks at each succeeding game after the first round on a fresh basis to determine a win or loss based upon the last poll rankings for the two actual teams in each such game...

I didn't write much during the regular season, but I'm ready to go for the NCAA women's tournament. I have once again produced my Conference-Adjusted Combined Offensive-Defensive (CACOD) metric, the methodology of which is explained here. The heart of the CACOD is the ratio of a team's own hitting percentage to the hitting percentage allowed to opponents. The 64 NCAA teams are ranked below on the CACOD (unless you have amazing eyesight, you'll want to click on the images to enlarge them).

The principle is simple: Whenever two teams play, the one with the higher CACOD would be favored to win. The CACOD's success rate in predicting winners of NCAA women's tournament matches has been right up there with other forecasting tools such as Pablo, Massey/Elo, and RK (see here and here). Last year, the CACOD foresaw BYU's run of upsets in the NCAA tourney. 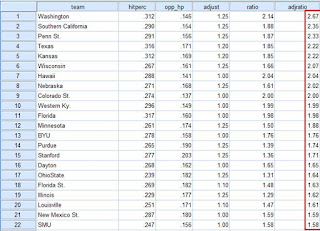 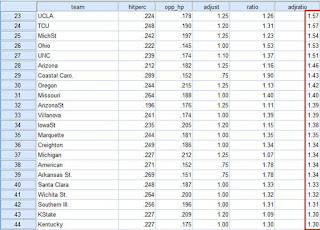 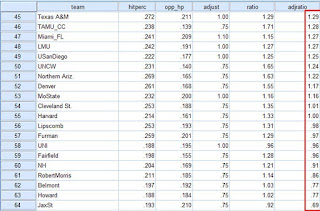 The Washington Huskies (28-2) come out No. 1 on the CACOD, with a clear margin over the next-closest teams. U-Dub also finished the season atop the AVCA coaches' poll, but received only a No. 5 seed from the NCAA. The Huskies' only losses were at USC (3-1) and at Stanford (3-2).

The No. 1 tournament seed is USC, which got off to a surprisingly torrid start this season, before losing to Washington and UCLA in the second half of conference play. A key to the Trojans' success this season was their mettle in road five-game matches. Four times (at Stanford, at Colorado, at Washington State, and at Arizona State), 'SC prevailed in five. However, in the final days of the season, UCLA took a five-setter from USC on the Trojans' home floor.

Looking over which teams have had the highest CACOD each year (since its introduction in 2011), I find that Washington has the highest score for a yearly leader of any school not named Penn State:

That's all for now. I'll continue to comment on tournament results and the CACOD as "December Madness" progresses.
at December 03, 2015 No comments: