Chuck Rey on "In Play Efficiency"

Chuck Rey, volunteer assistant coach at the University of Minnesota, e-mailed me this morning with a statistical variation on hitting percentage.

Rather than putting the emphasis on kills, which the usual measure of hitting percentage does, the Gophers focus on putting the ball in play (i.e., getting a kill or at least not spiking the ball out of bounds or into the net). They even have a name for it, the "In Play Efficiency" or IPE. As Chuck stated in his e-mail to me, the "IPE stat is just a 1 - the error %."

Chuck was kind enough to present me with season-long IPE statistics for the Final Four NCAA women's teams from last December, which I am posting with his permission. 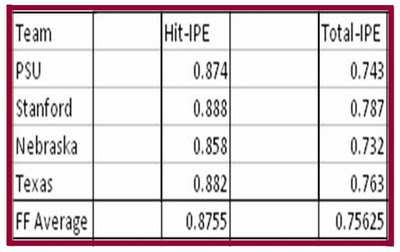