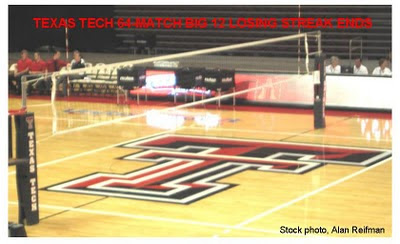 Texas Tech University's women's volleyball team tonight ended its 64-match losing streak in Big 12 conference play, with a five-game win over Kansas.﻿ I'm on the faculty at Texas Tech, so I've eagerly been awaiting this day! The Big 12 schedule is 20 games (Oklahoma State doesn't field a volleyball squad, so each team has 10 opponents, each played home and away). The Red Raiders won their conference opener in 2007, then dropped their remaining 19. Seasons of 0-20 followed in 2008 and 2009, and then the team started off 0-5 in the Big 12 this year. 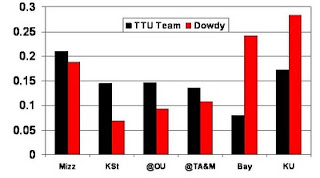 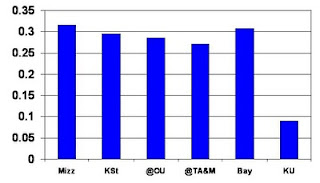 The Red Raiders recorded 17.5 blocks against Kansas to contain the Jayhawks' offense (Texas Tech's block total is, of course, going to be high simply due to the five-game length of the match, but even prorating for number of games, it's still one of the team's best blocking efforts of the season).

There have been at least two other favorable signs for the Red Raiders, of late. One is the improved hitting of offensive workhorse Amanda Dowdy (who has taken roughly one-third of the team's spike attempts this season), as shown in the red bars above. Dowdy injured an ankle in the Baylor match, but showed no ill effects tonight.

Texas Tech also had nine aces against Kansas. I attended an earlier Raider match this season, a three-game loss to Kansas State, where Texas Tech had only one ace. It seems the team is serving a lot more aggressively now, which should make it harder for the opponent to side-out.
at October 02, 2010 No comments: