Penn State won its sixth NCAA women's volleyball title in school history last Saturday night, stopping an amazingly tenacious Wisconsin Badger squad in four games, 25-19, 26-24, 20-25, 25-23.  The Badgers had lost 3-0 to the Nittany Lions both times in Big 10 play this season (although there were some tight "deuce games" in there). Other Wisconsin losses during conference play (e.g., 0-3 to Michigan and 1-3 to Illinois, both in Madison) made it seem even less likely the Badgers would make it to -- and seriously contest -- the national championship match. But, two nights after shocking defending champion Texas, Wisconsin most certainly did make a serious run for the national title!

Based on the play-by-play sheet from the championship match, I created the following graphic of the scoring sequences in the four games (Wisconsin in red, Penn State in blue). Unless you have some amazing eyesight, you'll want to click on the graphic to enlarge it. 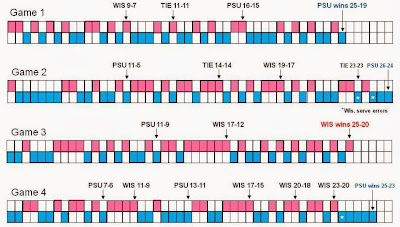 The Nittany Lions' dominant stretch, to which I alluded above, began right after Wisconsin had cut PSU's Game-1 lead to 16-15. The Nittany Lions proceeded to close out the opening game 25-19 and then dart off to an 11-5 lead in Game 2. During this run, Penn State hit a sizzling .538 according to my unofficial tally (14 kills with no attack errors, on 26 swings).

At this point, it looked as though the Nittany Lions might waltz off with the national title as easily as they had dispatched the hometown Washington Huskies in Thursday night's semifinal romp (25-14, 25-13, 25-16). Seemingly out of nowhere, however, Wisconsin rebounded from its 11-5 Game-2 deficit to outscore Penn State 14-6 and take a 19-17 lead. The Badgers maintained the upper hand to hold a game-point at 24-23, but a missed serve (coming on the heels of a missed Wisconsin serve while holding a 23-22 lead), kept the Lions alive at 24-all. Back-to-back kills by PSU's Ariel Scott then put Game 2 in the Lions' column, 26-24. Scott, a senior right-side hitter, was Penn State's most effective attacker from the "pins" (outside, by the antennae that define the width of the court), with a .294 evening (21 kills and 6 errors, on 51 attempts).

One likely factor in Wisconsin's turnaround -- and near-win -- in Game 2 was the disappearance of the Penn State block. The Nittany Lions took a 2-1 lead in Game 2 on a stuff by senior middle-blocker Katie Slay and then did not score again via the block until well into Game 3, when Nia Grant and Megan Courtney teamed up to give the Lions a 9-8 lead. (Wisconsin outblocked Penn State on the evening, 14 to 9.) The Badgers pulled off a 6-0 run in Game 3 to take a 17-12 lead and closed things out 25-20.

Jumping ahead to Game 4, Wisconsin used a pair of 4-0 runs to help take a 23-20 lead, and a decisive fifth game seemed all but certain. However, reprising their late comeback against Stanford in the regional finals, the Nittany Lions scored the final five points against the Badgers to take Game 4 (25-23), the match, and the championship. PSU setter Micha Hancock put her signature on the win with two service aces down the stretch.

Two other trends defined the match in my mind. First was the "Battle of the Middles," featuring Penn State's Slay and Wisconsin junior Dominique Thompson. When in the front row, Slay typically remains in the center to hit quick sets. Thompson, in contrast, frequently runs the slide play, in which a middle hitter darts out to the right-hand side in an attempt to hit against one blocker instead of two. Thompson, who ended up hitting .314 on the evening (16-5-35), compiled four kills in rapid succession on slide plays in Game 3, as the Badgers rallied from a 5-3 deficit to even the score at 7-7. Here's a graph of Slay and Thompson's kills per game. 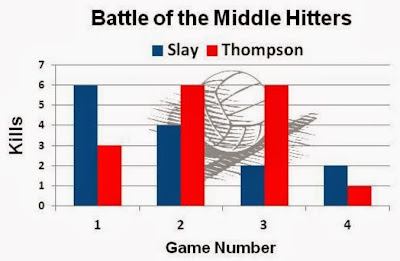 The second trend that struck me was how, relative to the Nittany Lions, the Badgers didn't even obtain that many of their points from kills. Instead, using what I call a "grind-it-out" style, Wisconsin kept a lot of balls alive and capitalized on Penn State errors of various kinds (e.g., service errors; ball-handling errors; and hitting errors, which include balls spiked out of bounds and those blocked back to the floor on the hitter's side of the court for an immediate defensive point). In pie-chart form, the following graphs (again, which you can click to enlarge) show how each team got its points (the Lions scored a total of 96 points on the evening, the Badgers, 91).

The Badgers amassed 45 kills*, accounting for just under half of their 91 total points. The Nittany Lions, in contrast, pounded out 61 kills, accounting for nearly two-thirds of their 96 points. However, Wisconsin received larger shares of its respective points than did Penn State from blocking, opponent spikes hit out of bounds (calculated from the box score as opponent hitting errors minus a team's own blocks), opponent serving errors, and opponent ball-handling errors.

Most observers probably would not have expected this relatively high rate of errors from a senior- and junior-laden Penn State squad. Nevertheless, the Nittany Lions' moxie and offensive firepower were enough to earn them yet another crown.

*The box score shows 46 kills for Wisconsin and 62 for Penn State. However, it also shows 1 blocking error for each team, which typically involves a blocker touching the net. According to AVCA scorekeeping guidelines, “if there is a block error, there MUST be a kill for the other team.” In other words, once a net-violation or other blocking error is called, the play must also have a kill recorded, as a technical requirement. To prevent the disposition of any play from being counted twice, therefore, I counted block errors without their accompanying kills. The AVCA guidelines ("Making Volleyball Statistics Simple") are linked in the right-hand column of this page.
at December 25, 2013