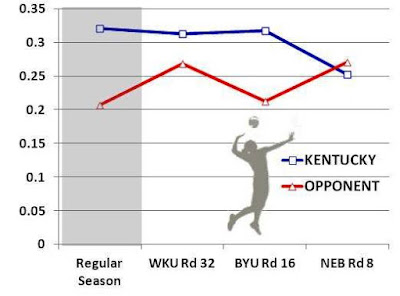 Florida and Stanford, the contestants in tonight's other semi, have not met this season. For what it's worth, the Gators will be playing their third straight Pac 12 opponent, having beaten UCLA 3-1 in the Sweet Sixteen, followed by USC in the match discussed above.
at December 14, 2017 No comments: 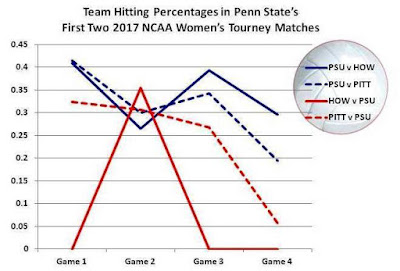 The bracket for this year's NCAA women's tournament was announced Sunday night and play begins Thursday. One aspect of the draw raising some eyebrows is the No. 4 national seed for Kentucky (behind Penn State, Florida, and Stanford). The Wildcats went 17-1 in the SEC, splitting two matches with Florida, and 26-3 overall (match-by-match log). UK's two nonconference losses were to Creighton (9th seed in the NCAA field) and Kansas, whereas the Wildcats' best nonconference wins were over USC (10th seed) and Utah (11th seed).

Using my Conference-Adjusted Combined Offensive-Defensive (CACOD) rating system (described here), I peg Kentucky as having the 13th-best chance to win the national title. The chart below (which you can click on to enlarge) shows the CACOD rating (under "adjratio") for each of the 16 seeded teams. A team's own hitting percentage during the season is one of the major components of the CACOD and the Wildcats' (.321) was one of the best in the nation. However, UK allowed its opponents to hit .207 in the aggregate (the other major component of the CACOD), a fairly high value for elite tournament teams. 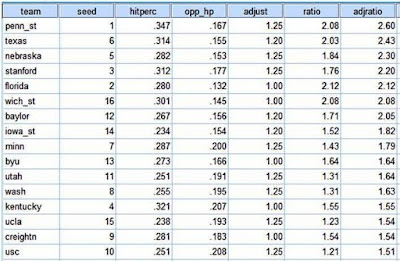 Note that in the six years since I developed the CACOD, no team with a value below 1.91 has won the NCAA title. Kentucky (1.55) would thus have to break some major new ground to win the championship.

The NCAA seedings and the CACOD agree in placing Penn State in the No. 1 slot. The Nittany Lions' top hitting percentage among the 16 seeds, combined with a reasonably good defense, yields a 2.60 CACOD for Penn State. Texas and Nebraska are similar defensively, each allowing its respective opposition to hit just a little above .150. However, the Longhorns' superior offensive hitting percentage (.314 vs. .282) gives them an edge in the CACOD over Nebraska.

Stay tuned for updates throughout the tournament!
at November 28, 2017 No comments:

No. 2 Penn State suffered its first loss of the season last night, as Nebraska came into State College and swept the Nittany Lions, 26-24, 25-19, 25-20. The number that caught my eye was the Huskers' hitting percentage of .347. This was the highest hitting percentage Penn State had allowed an opponent since Minnesota put up a .374 in sweeping the Nittany Lions on October 29, 2016 in Minneapolis.

Nebraska entered the match with three losses on the season, to highly ranked Oregon and Florida in an opening-weekend tournament, and to Northern Iowa on September 16. As noted, Penn State's ledger was perfect before last night and included a pair of wins over defending national champion Stanford.
at September 23, 2017 No comments:

Over at Volleyball Magazine, each day they're releasing a preview of the upcoming women's season in a different conference. There's a lot of good information on each team in a given conference, including returnees, losses, and newcomers. I'll link to each preview as it comes out:

A little over a week ago, for the second straight year, Ohio State swept BYU for the NCAA men's championship. Whereas last year's result was somewhat of a surprise, this year's was less so, as the Buckeyes were the host team for the Final Four.

As the following chart shows, similarity between the last two years' title matches went beyond the identities of the teams involved and the score. In particular, Ohio State's hitting percentage, as a team, was extremely similar in the 2016 and 2017 finals. BYU's spike attempts totaled 71 last year and 70 this year; each of these substantially trailed OSU's respective number of attempts, suggesting Cougar problems with serve-receipt, passing, and staying in-system.


The Buckeyes' Nicolas Szersen took virtually the same number of attack attempts in the two finals (24 last year, 25 this year), but hit much more efficiently this year. Maxime Hervoir, who has played for the French national team and attended two years of college in that country, added to the OSU attack this year, hitting .471 (10-2-17) in the final match. (He did not play in last year's final.)

BYU star Ben Patch, who battled injury most of the season, improved his hitting percentage from a year ago, but only had 12 attack attempts.
at May 15, 2017 No comments: