We began our analysis of the nation's top women's college liberos with Part I on serve receipt (plus an addendum). Today, we unveil Part II on digging. As I've noted before, the ideal way to evaluate liberos would be with quality ratings of each contact, such as difficulty level of each dig and whether the dig leads to a team running its offense in system. Lacking such fine-grained ratings, however, I must rely on publicly available, online box scores. 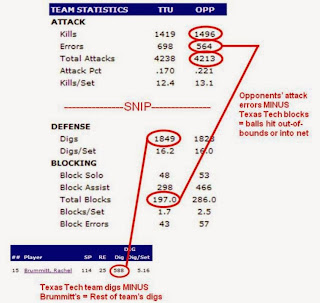 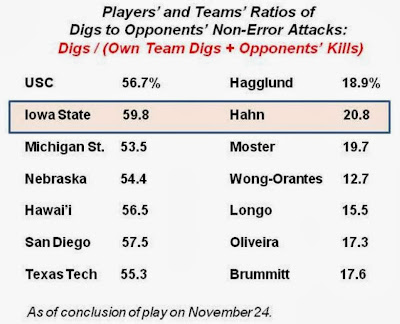 Last Friday, I introduced my statistical examination of the top women's college liberos with an analysis of serve-receipt statistics (link). Using methods described in that earlier posting, I created a measure called S2R (for success-squared times receipt activity) and reported scores for Natalie Hagglund (USC), Kristen Hahn (Iowa State), and Kori Moster (Michigan State). I also invited readers to suggest additional liberos for statistical analysis. In response to a message I posted on VolleyTalk about my original analysis, an online discussion ensued in which commentators listed other liberos they thought were among the nation's best. These additional liberos are Justine Wong-Orantes (Nebraska), Ali Longo (Hawai'i), and C'era Oliveira (University of San Diego).

As I noted in my previous posting, one needs a "detailed" box score (which goes beyond the statistics in an ordinary box score) to compute the S2R score. In scouring the Internet for matches played by these latter three liberos, I found five detailed box scores for Wong-Orantes, and two each for Longo and Oliveira. Here are the numbers for the three players (the "^2" expression refers to squaring a number or raising it to the second power).

As can be seen, all three of these liberos come out at around .300 on the S2R measure, comparable to the leaders in my previous analysis, Kristen Hahn and Kori Moster. A .300 average corresponds to error-free serve-receipt, while taking on 30% of the load in receiving serve for one's team. Taking on a larger share of the team's receiving load can, of course, compensate for making a few errors on the serves one receives.

I'm not sure how much confidence we can have in the results for Longo and Oliveira, as the statistics for each come from only two matches. Oliveira's, however, do come from matches against two extremely tough opponents, Texas and USC, with the Trojans featuring server extraordinaire Samantha Bricio (currently second in the nation in aces per set).

Wong-Orantes, a Nebraska frosh who earned AAA status (the highest possible) from the California Beach Volleyball Association at age 12, obviously is adjusting well to the indoor collegiate game!
at November 01, 2013 No comments: