Illinois entered this past weekend's NCAA Women's Final Four with an interesting proposition. To win the national championship, the Fighting Illini would most likely have to win the championship of Los Angeles. USC stood as the opponent in Thursday's semi-finals, with UCLA up next in Saturday's finals provided the Bruins could handle Florida State (which UCLA did, via sweep).

The Illini passed its first test, besting USC in a five-game classic. On the final point of the Illinois-USC match, shown here on YouTube, the ball crossed the net 20 times, before the Trojans hit it out to give the Illini a 15-10 win in the closing set.

Unfortunately for Illinois, its difficulty in putting the ball away on the final point vs. USC foreshadowed troubles it would have doing so two nights later against UCLA. The Bruins had the upper hand for most of the championship match and won in four, 25-23, 23-25, 26-24, 25-16.

Thanks to a pair of Illini spurts -- outscoring UCLA 12-3 to take Game 2 after trailing 20-13, and 5-1 to get two set-points in Game 3 -- the match could have gone in a different direction (see box score/play-by-play sheet). The Illini couldn't close out Game 3, however, as their spike attempts while leading 24-22 and 24-23 were dug by UCLA. The Bruins won both rallies to tie the score at 24-24 and then won the next two points as well (if you check the match video at the ESPN3.com archive, the final stages of Game 3 appear at the 1 hour, 50 minute point).

The two teams' final hitting percentages were very similar, .218 for UCLA and .215 for Illinois. Rather, the Bruin win seems mainly attributable to defense, with UCLA outblocking (15-11.5) and outdigging (87-76) Illinois. The serving game was also important, with the Illini committing 11 errors to none for the Bruins; despite Illinois's seemingly more aggressive serving approach, it racked up only two more aces than did UCLA (4-2).

The Illini's powerful offensive game was limited to a .215 hitting percentage by UCLA, in contrast to the .279 Illinois was able to generate vs. USC. The following graphic (on which you may click to enlarge) compares what happened on all of Illinois's total spike attempts (TA) vs. USC (left column) with what happened on all of the Illini's swings vs. UCLA (right column). 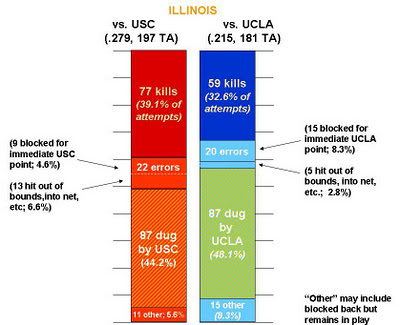 Whereas Illinois got kills on 39.1% of its hitting attempts vs. USC, the Illini succeeded only 32.6% of the time vs. UCLA. A team is officially credited with a block when the ball goes rocketing back to the floor on the hitting team's side of the net for a defensive point. UCLA scored via block on 8.3% of Illinois's swings,  whereas USC did so on only 4.6% of them (USC more frequently induced the Illini to commit the other type of hitting error, hitting the ball out of bounds, than did UCLA, 6.6% of the time compared to 2.8%). UCLA also dug 48.1% of Illinois's spike attempts, compared to the 44.2% of Illini hits that USC dug.

UCLA dropped only three sets in its six NCAA tourney matches, one each to San Diego, Texas, and Illinois. The Bruins are fortunate the championship match didn't go to five games, as the Illini's record this season in matches going the distance was 7-0...
at December 19, 2011 No comments:

This year's tournament has to be right up there for the volume of upsets, near-upsets, and all-around strangeness. UCLA appeared to be floundering towards the end of the regular season, losing three of its last five matches. Florida State, playing in the relatively low-profile Atlantic Coast Conference, certainly didn't seem like Final Four caliber during the season. Yet, the Bruins and Seminoles will be playing each other this upcoming Thursday night in one national semi-final.

The other national semi will feature two teams that each looked dominant for most of the season, but also had some unexpected losses, USC and Illinois. The mighty Big 10 conference, which had six of its member teams advance to the Sweet 16 round, ended Friday night's regional semi-finals with the minimum number of surviving teams it could have, one (because Illinois played Ohio State and someone had to win!).

In the remainder of this entry, I summarize developments in the four regions and discuss what to look out for in the Final Four.

A night after sweeping four-time defending national champion Penn State out of the tournament, UCLA ousted the national No. 1 seed Texas, 19-25, 25-22, 25-22, 25-21 (box score). Texas's decline after Game 1 is evident in many ways. As shown in the following graph, the Longhorns' hitting percentage fell from a torrid .517 in Game 1 to roughly .200 in each of the remaining games. 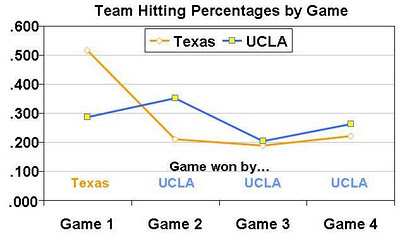 As perhaps a microcosm of the match, Texas's Haley Eckerman amassed 4 kills in Game 1, and 5 in Game 2, but only 1 more the rest of the contest (fairly late in Game 4 with UT down 15-12). Eckerman sat for the middle stages of the match, leading the ESPN-U announcers and other observers to wonder what might have been going on.

Texas outblocked UCLA 10-7 for the match, but the way the Longhorns' blocks were distributed among the four games shows why UT didn't gain a bigger advantage from its blocking.

The Longhorns recorded 5 blocks in Game 1 (including 3 straight to advance their lead from 17-15 to 20-15). However, UT had no blocks in the second set, 2 in the third, and none for most of the fourth. Only after the Longhorns had fallen behind 20-13, did they somehow put together 3 more blocks, but it was too little, too late. (These game-specific statistics come from looking at the play-by-play sheet on the archived CBS Sports gametracker.)

For UCLA, Rachael Kidder provided the offensive lift against Texas, hitting .417 from 26 kills and 6 errors on 48 swings. As seen in the graph above, the Bruins experienced what seems to be their customary Game-3 dip in hitting percentage, but still won the game.

Twelfth-seeded Florida State stunned No. 5 Purdue and No. 4 Iowa State, the latter in five sets, to advance to the Seminoles' first volleyball Final Four. Blocking appeared to play a large role in FSU's win over Iowa State. Florida State outblocked Iowa State 16-8, as well as outhitting the Cyclones .245-.204 (box score).

It was blocking that arguably turned around Game 5, as the Seminoles stuffed the Cyclones at four key points (to tie the game 8-8, and boost their leads to 10-8, 12-10, and 14-11). If, instead of being blocked, Iowa State could have made good on most of these spike attempts, the match could well have had a different outcome.

The Trojans managed to turn up their offensive intensive in the fifth set, when they needed to, hitting .400 (12-2-25) and siding out (winning points on the Rainbow Wahine's serve) 69% of the time. Seven of those kills were by Alex Jupiter. The fact that 'SC scored 12 of its 15 Game-5 points on kills (with the others on an ace and two blocks) is noteworthy in that Hawai'i wasn't exactly giving things away with errors.

The four teams that will be competing for the NCAA title all have shown great resiliency, overcoming deficits, hometown crowds for their opponents, and the pressures of fifth games. Interestingly, Florida State, the team I would give the least chance to win it all, may have the best balance between hitting and blocking. Illinois probably has the most consistently strong hitting, whereas USC can dominate with the block (which is not to say the Trojans don't have some fine hitters, when they're on). UCLA's problem this season has been closing out matches (squandering 2-set-to-1 leads at Pepperdine and Arizona, and a 2-0 lead at Oregon, to lose all three of these matches). Lately, however, the Bruins have shown no trouble closing the deal.
at December 11, 2011 No comments:

The headlines from the first weekend of this year's NCAA Division I women's volleyball tournament would have to be upsets, in general, and the poor showing of the Pac 12 conference, in particular. In the following chart, I summarize the performances of teams from the three major conferences (Big 10, Big 12, and Pac 12), other seeded teams, and any other teams that advanced to next weekend's Sweet 16. You may click on the graphic to enlarge it. 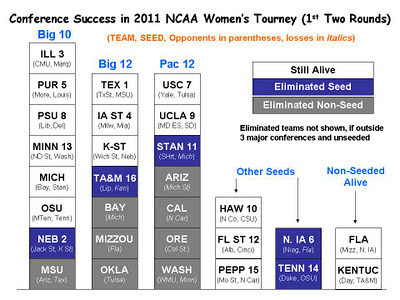 The highest-seeded upset victim was No. 2 Nebraska, which fell at home in Lincoln to former conference rival Kansas State in five games, 25-22, 22-25, 31-29, 22-25, 15-11, in the second round. The Cornhuskers' downfall appeared to be on defense. Offensively, Nebraska hit exactly at its regular-season percentage (.262) against the Wildcats. However, whereas the Huskers held their regular-season opponents to a collective .143 hitting percentage, K-State hit nearly .100 better, registering a .241 evening (box score). The Huskers still slightly outhit the Wildcats (.262-.241), so one must look further for possible explanations of Nebraska's loss. Leading candidates are blocking (where K-State held the edge, 13-10) and serving (where the Wildcats had 4 aces and 7 errors to the Huskers' 2 and 11, respectively).

The second-highest seeded team to lose was No. 6 Northern Iowa, to Florida, also in the second round. Despite the 33-1 record UNI brought into the match, its loss to the Gators would probably not be considered such a stunner by most observers, as the Panthers' schedule is not the nation's most challenging in the Missouri Valley Conference. Florida mainstay Kelly Murphy led the way with a spectacular .452 hitting night, on 15 kills and 1 error on 31 spike attempts. Fellow senior Kristy Jaeckel did Murphy one better on error-avoidance, hitting .333 (13-0-39).

In another previous posting, I wrote about Michigan's "unfortunate penchant for failing to capitalize on game and match points during conference play..." What may have been the turning point for the Wolverines in NCAA tournament play came in Game 3 of their opener against Baylor. Having split the first two sets, Michigan and Baylor went "overtime" in the next game, which the Wolverines pulled out 29-27. UM then closed things out easily in Game 4, 25-17.

There were two other matches in which Big 10 teams defeated Pac 12 teams head-to-head. No. 13-seed Minnesota came back from two games down to oust Washington in a second-round match. The Huskies neutralized the Gophers' big hitter Tori Dixon (.048), but couldn't do the same to Ariana Filho (.357) or Katherine Harms (.356). For U-Dub, Krista Vansant (.327) and Bianca Rowland (.323) hit well in defeat. Also, in a first-round match, Michigan State knocked off Arizona, before getting swept by top-seeded Texas.

Another surprise advancer from the Big 10 is Ohio State, which scored a five-game victory over No. 14-seed Tennessee in Knoxville. In the 1990's, then-ESPN studio host Dan Patrick used to say of various athletes, "You can't stop [name of player], you can only hope to contain him!" (audio clip). Well, the Buckeyes' didn't exactly stop the Volunteers' high-powered offense -- Shealyn Kolosky (.391, 11-2-23) and DeeDee Harrison (.308, 12-4-26) put up some nice numbers for UT -- but OSU contained the rest of the team, leaving the Vols with a .171 hitting percentage for the match. OSU bested this with a .207.

Click here to see the official NCAA bracket and match-ups for the round of 16.
at December 04, 2011 No comments: