I recently visited the NBC Olympics website to learn about developments in the volleyball competitions taking place later this summer. While there, I found this article (accompanied by extensive statistics) on the final women's Olympic qualifying tournament, which concluded recently.

Among the statistics listed in the final tournament standings, were each team's points scored and allowed, and games (or sets) won and allowed (the first reference to "Points" in the chart appears to refer to points in the standings, 2 for a win and 1 for a loss; points won and loss in the rally scoring are separate).

Volleyball, like tennis and perhaps other sports, uses an aggregative or hierarchical scoring system. First, a team wins points. Upon winning 25 points in a game (15 in a Game 5), with at least a two-point margin, a team would then win a game (also known as a set). Winning three games would then give a team the match.

Certainly there would be a positive correlation among the winning of points, games, and matches. Teams that win more points should win more games, and those that win more games should win more matches. Focusing on the relationship between points and games (because these would have the largest numbers of observations), I wasn't sure that it would necessarily be perfectly linear, however.

Perhaps the plot of the two variables would be S-shaped. As a theoretical example, Team A might average 8 points per game (roughly a ratio of .33 if the opponent consistently scored 25 points per game), whereas Team B might average 12 points per game (roughly a ratio of .50). Team B would have a higher points ratio relative to the opposition, but both teams would have an equal (equally tiny) ratio of games won to games lost. Higher up the ability scale, where teams had moderately good point ratios, there could be a positive linear relation between point ratio and game ratio. Lastly, at the highest ability level, there could be slight variation among teams in their point ratios, but all could have uniformly high game ratios.

For what it's worth, given the small sample size of only eight teams, the obtained correlation between point ratio and game ratio was a near-perfect r = .989. The relation is shown below (you can click on the image to enlarge it). 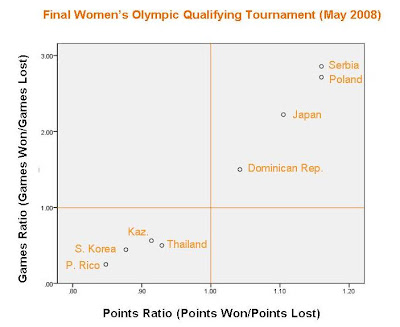 Several findings are worth noting:

2. No teams were located particularly near the 1.00 neutral point for either ratio. To do so, a team would have had to play virtually all close matches, winning and losing equally often and by equal margins.

3. Although the overall distribution exhibited a virtually perfect linear pattern, there appeared to be greater flatness in the plot among the least successful teams, than among the other squads.
at May 28, 2008 No comments:

In anticipation of tonigh't NCAA men's volleyball final between No. 1 Penn State and upstart Pepperdine (which only made the field via a late surge through the Mountain Pacific Sports Federation tournament), user "nomas" on the VolleyTalk discussion board offers this analysis of the match-up.

One of the salient issues is that Penn State has not played that tough of a schedule during the season, thus likely inflating the Nittany Lions' statistical prowess. As seen on Penn State's schedule, the Lions have played only a few matches against traditionally strong teams from the Pacific (Hawaii, UCLA, and Long Beach State), and two of those three matches were back in early January.
at May 03, 2008 1 comment: