Shakespeare wrote, "What's past is prologue." That turned out most decisively not to be a useful frame to view last night's NCAA men's final between UC Irvine and USC.

As shown in yesterday's preview in the posting immediately below the current one, the Anteaters' Carson Clark had given no recent indication he could dominate the national championship match. In his two prior matches against the Trojans (in the teams' second meeting of the conference season and in the conference tournament), Clark had hit .204 and .103, respectively. And in Thursday night's NCAA semifinal vs Penn State, Clark's hitting percentage was .179.

However, the senior opposite (right-side) hitter may as well have been wearing a cape and an "S" across his chest last night vs. USC. As described in UCI's championship-match article, "Senior All-American Carson Clark had a match-high 22 kills, hitting .465, and added eight digs and three service aces as UCI (26-5) topped the Trojans for the second time in nine days."

Clark's .465 hitting percentage came on 22 kills with only 2 errors, on 43 spike attempts. Though set more sparingly, Dan McDonnell (.571, 5-1-7) and Connor Hughes (.357, 13-3-28) also posted fine hitting nights for UCI. The Anteaters' Kevin Tillie, who came in on fire, hit only .100 (11-8-30). Chris Austin, a mid-season replacement at setter, not only orchestrated the Irvine offense to a .320 team hitting percentage (with 'SC registering only 7 team blocks), but led the team by a wide margin with 15 digs. With Austin getting so many digs, other players had to set the hitters some of the time and, as a sign of the Anteaters' versatility, five players other than Austin recorded at least 1 assist.

UC Irvine and USC will meet in tonight's NCAA men's final. During the teams' head-to-head match-ups in the regular conference season, each team won at home, UCI on January 27 and USC on April 7. The Anteaters defeated the Trojans in the teams' third match, a semifinal of the MPSF conference tournament.

With an eye toward identifying the key hitters in tonight's final and speculating on which players need to do well for their team to win, I've created the following chart (on which you can click to enlarge it). The chart lists each team's most frequently set attackers and their hitting percentages (along with number of spike attempts) in the head-to-head USC-UCI matches, plus each team's NCAA semifinal win (USC over Lewis; and UCI over Penn State). 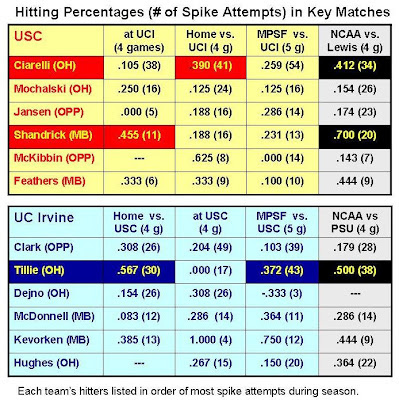 The Trojans are led by 6-foot-6 senior outside hitter Tony Ciarelli, who was recently named the AVCA national men's player of the year. In the matches charted above, Ciarelli has led 'SC in spike attempts, sometimes by a huge margin. Almost like clockwork, Ciarelli gets about 10 attempts per game (set). Perhaps because of other teams focusing their block on Ciarelli, his hitting percentages have been inconsistent in the matches above. In addition to his hitting, Ciarelli's serve is also a major weapon.

USC's Robert Feathers led the MPSF in blocks per game this year. The 6-8 frosh player doesn't seem to get too many balls to hit, but does respectably when he is set. Teammate Steven Shandrick, a 6-7 senior, tied for eighth in blocks per game, but seems to be a bigger part of the Trojans' offensive attack.

Kevin Tillie, a 6-6 junior who made his way to Irvine via France and Canada, is clearly the Anteaters' offensive focal point. Other than the regular-season match at USC, Tillie has been dominant in the matches listed above. A key to tonight's final may be how well UCI's middle blockers, Dan McDonnell (6-6 senior) and Scott Kevorken (6-9 soph), attack. Each has done well recently.

UCI's Carson Clark was second in the conference to Ciarelli in aces per game and, as a team, the Anteaters (1.62/game, first in the MPSF) actually topped the Trojans in this category (1.19/game, third).

On the defensive side, 'SC led the conference in lowest opponents' hitting percentage (.185), whereas UCI was fifth at .265. The Trojans far outperformed the Anteaters in both blocking (second in the conference vs. ninth) and digging (fourth vs. eleventh).

I would slightly favor USC, based on the home-court advantage, although the Anteaters beat the Trojans on the latter's home court in the MPSF tourney. Can UCI do it again? Tonight's match is also a rematch of the 2009 final, won by Irvine, in which the Anteaters greatly increased their blocking performance.
at May 05, 2012 No comments:

The NCAA men's Final Four gets underway tonight in Los Angeles, with host USC (MPSF regular-season champion) taking on Lewis (Illinois) from the MIVA in one semifinal, and UC Irvine (MPSF tourney champion) taking on Penn State from the EIVA. USC's media notes are available here.

In anticipation of the action, I was reading some of Off the Block's unparalleled coverage of men's collegiate volleyball, where I came across a transcript from USC coach Bill Ferguson's press conference. The following quote jumped out at me:

Q: Can you talk about USCʼs rise from a slow start?

BF: Most of our rise, or the streak, that all came about when (Maddison) McKibbin became healthy again. We went into the season knowing weʼd have two opposites that would probably be fairly equal in ability with Maddison and Tanner (Jansen). With the added notion that McKibbin could pass and play on the left and that gave us some flexibility. Maddison sprained his ankle on the first day of practice after Christmas break and sprained it badly. The Pepperdine match at home toward the end of February [actually Feb. 10] was the first time he got back on the court with us...

It is true that the February win over Pepperdine launched the Trojans on an 18-match winning streak, which UCI snapped in the MPSF tournament. Here at VolleyMetrics, of course, our job is to break down the numbers and seek specific evidence of whether/how McKibbin may have lifted USC's performance.  As longtime readers know, I use hitting percentage as my workhorse statistic for evaluating success, as it is well correlated with winning matches.

Baseball has the concept of "protection," namely that having many good hitters in the batting order "protects" a star hitter by not allowing opposing hurlers to "pitch around" him. If a pitcher doesn't throw any strikes to a star hitter, it will result in a walk and just give the other good hitters a baserunner potentially to drive in. (That's the idea of protection in theory; in practice, the phenomenon appears greatly overstated.)

Perhaps McKibbin's return, in his opposite/right-side hitter position, offered protection, in a sense, to the other hitters. Having one more good spiker available may limit other teams' ability to focus their blocking on other Trojan hitters. Ferguson also noted McKibbin's passing ability, which could help 'SC run its offense "in system" and thus lead to better overall hitting percentage. 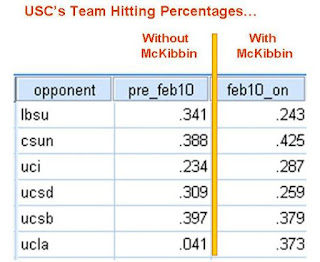 Against UCI, the men of Troy's hitting improved noticeably in the teams' second conference match to .287, compared to .234 in the first match. McKibbin himself was a major contributor in the second UCI match, registering a .625 percentage (5 kills and 0 errors on  8 swings). In the third Trojan-Anteater battle, in the MPSF tourney semifinals, UCI held USC to a .194 hitting percentage and McKibbin to a .000 night (2-2-14).

The Trojans' hitting improved most dramatically against UCLA. However, with USC's percentage being only .041 the first time, it probably would have risen with or without McKibbin in the second match (he hit .217 in USC's second encounter with the Bruins). There was only one other opponent, Cal State Northridge, against whom USC improved its team hitting percentage with McKibbin in the line-up (with him contributing a .312 evening).

As noted above, McKibbin also received praise from Coach Ferguson for his passing. Although statistical "digs" and passing are not identical (digs refer only to keeping the ball alive on an opponent's attack attempt), McKibbin did record three matches with 7 or more digs.

In conclusion, I think it's fair to say that McKibbin made some nice contributions to USC's success in the second half of the season. However, neither the team's nor McKibbin's statistics show a huge turnabout with his return