Last night's NCAA women's championship match between Penn State and Texas was truly, pardon the cliche, one for the ages. There was the historical aspect -- the Nittany Lions winning their 102nd straight match and third straight national title. There was the aspect of the teams' senior leaders trying to will their respective squads to victory -- the Longhorns' Destinee Hooker dominant for most of the match, with the Penn State pair of outside hitter Megan Hodge and setter Alisha Glass getting by with a little help from their friends. And there was the comeback aspect -- Penn State having trailed two games to none -- and the fact of how closely the teams ultimately were matched. There were 10 tie scores in the decisive fifth game, which was won by the Nittany Lions 15-13.

Here at VolleyMetrics, however, our job is statistical analysis. The role of statistics in the sport arguably reached a new milestone during last night's telecast when Penn State coach Russ Rose, in a brief interview heading to the locker room for the "halftime" break between Games 2 and 3, noted the following (as I transcribed from ESPN360.com's archived video of the match):

As we'll explore through the numbers, the one decisive factor for the Nittany Lions can perhaps be distilled to one word: balance. Simply put, Penn State seemed to have a lot more options in the long run than did Texas. Before we begin the major statistical analyses, I must express great thanks to the NCAA for providing a "deluxe" 11-page box score, which provides not only overall match statistics, but also statistics and play-by-play sheets for each game (set). The graphics I've created (shown below) would have been a lot more difficult to produce without the elaborate box score.

In our first graph, we see that Hooker clearly got the best of Hodge in individual hitting statistics. 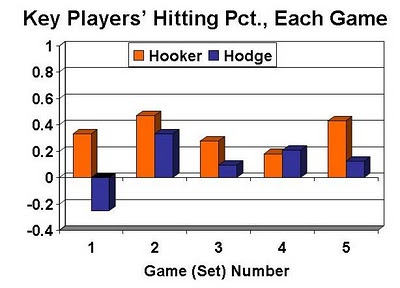 For readers relatively new to volleyball who aren't familiar with the formula for hitting percentage, ESPN was kind enough to provide an example of a calculation, midway through the match. 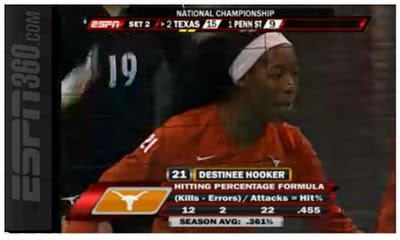 Longhorn coach Jerritt Elliott had an interesting, possibly surprising, observation after the match, as reported in the Daily Texan (second linked article above):

“I thought we set [Hooker] a little bit too much,” Elliott said. “We kind of got out of our rhythm a little bit. But for us to win, Destinee has to have a big game. She’s carried us. She performed at a very high level.”

Readers may find it useful to ponder Elliott's statement in light of the following graph. 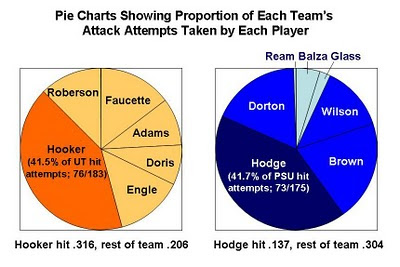 Yes, Hooker was set a lot, but no more (as a proportion of the respective teams' hit attempts) than was Hodge. With Hooker hitting markedly better than her teammates -- the opposite of what happened with Hodge and Penn State -- it seems hard to fault Longhorn setter Ashley Engle (or Elliott, if he was calling the plays) for calling Hooker's number so often.

The excellent hitting of Hodge's supporting cast manifested itself at the most important time. In Game 5, three Penn State players -- Arielle Wilson, Blair Brown, and Darcy Dorton -- combined for 7 kills (with no errors) on 10 attempts, for an overall .700 hitting percentage.

In my previous posting (below), I speculated that blocking would be important, and boy was I wrong! As shown in the next graph, in Games 2 and 3, the losing team outblocked the winning team. Perhaps at a larger level, however, one could argue that Texas's relative parity with Penn State in blocking -- the Longhorns had only two fewer total team blocks than than the Nittany Lions, 12 to 14 -- helped keep the Burnt Orange so competitive. 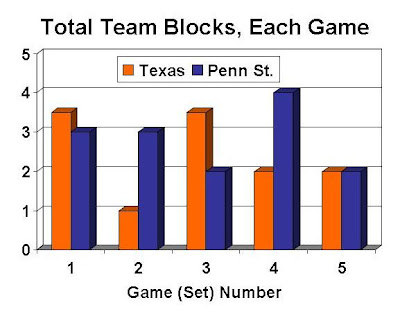