With the NCAA Division I women's volleyball tournament scheduled to begin play on Thursday, I am unveiling my second annual ranking of the tournament teams on the Conference-Adjusted Combined Offensive-Defensive (CACOD) metric. Though the CACOD is extremely simple to calculate (see below), it held its own with the more established volleyball ranking systems (e.g., Pablo, RPI, Rich Kern) in predicting match outcomes of last year's women's NCAA tournament.

In fact, only three quantities go into the CACOD formula: a team's hitting percentage for the entire season, the hitting percentage the team allowed its opposition to achive (cumulatively) on the season, and a conference-difficulty factor that I determine. I wrote last year about hitting percentage being "a great singular statistic for incorporating many aspects of the game." As I elaborated:

If you hit well (not just keep the ball in play, but get kills), your (individual or team) hitting percentage goes up. An attack kept in play by the other team hurts, as does a hitting error (spiking the ball out of bounds or getting stuff-blocked for an opponent's point). In order to hit well, a team must pass and set well. If you block or dig your opponent's spike attempts, that drives down the opponent's hitting percentage.

Another reason, I suspect, that the CACOD appears to work well is the sheer volume of data that goes into determining hitting percentages. A typical team might take (and have its opponents cumulatively take) from 3,500 to 4,500 swings in a regular season. The formula for the CACOD is simply:

A more in-depth explanation of my ranking scheme is available from a year ago's posting, when I introduced the system. My conference-difficulty factors are as follows:

*The American Athletic Conference, a spin-off from the Big East, will have a factor of 1.00.

This year's factor weights (above) are very similar to last season's, except for two changes. I lowered the Big 12 slightly, from 1.25 to 1.20, as this year's version of the conference seemed a little down from last year (with Texas A&M having departed and a not-ready-for-prime-time West Virginia squad moving in). Also, I raised the ACC from 1.00 to 1.10, in light of some recent NCAA-tourney success (Florida State making the Final Four a year ago and the Elite Eight in 2009; and Duke making the Elite Eight in 2010).

Here are the resulting rankings (see "adjusted ratio" in the right-most column). In any match, whichever team has the higher CACOD ranking would be expected to win, under my system. You may click on the graphics to enlarge them (note that the rankings appear in three parts). 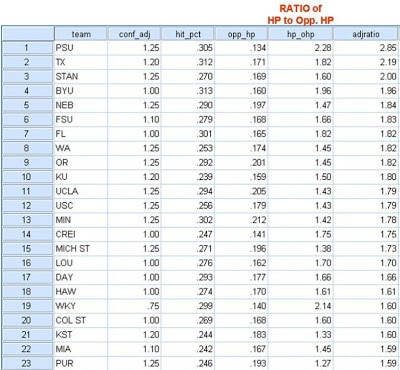 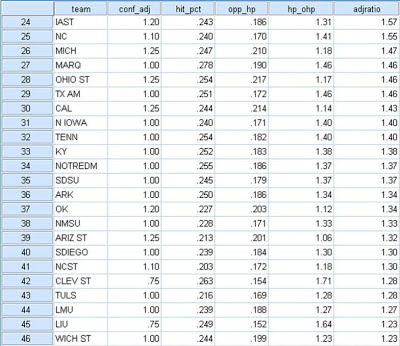 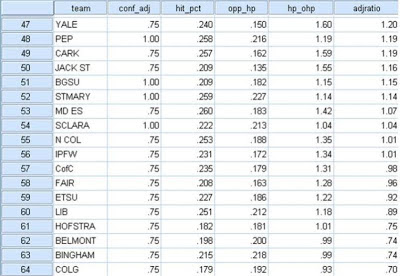 Whereas my ranking of Penn State, Texas, and Stanford in the top three closely matches the actual tournament seedings, the CACOD offers some surprises. Whereas BYU is seeded 12th, for example, I have the Cougars as the fourth-best team in the field. Whereas Florida is seeded 14th, I have the Gators seventh.

Was the CACOD just lucky last year or will it be a successful predictor two years in a row? We'll have a pretty good idea after the next three weekends of tournament play!
at November 27, 2012