Having taken three months to digest this year's NCAA men's title match between Hawai'i and Long Beach State, I'm ready to provide my statistical analysis. These teams were ranked as the top two squads entering the national final and they were extremely evenly matched.

Long Beach State* and Hawai'i  played three late-season matches leading into the NCAA tourney -- the final two matches (here and here) of the Big West conference season (played in Long Beach) and in the final of the conference tournament (in Honolulu). All three matches went five games and all three were won by the home team.

The Beach hosted the NCAA final round and the home-court advantage held true to form. The final went four games instead of five, but each game was close. Ultimately, Long Beach State successfully defended its national title, 23-25, 25-22, 25-22, 25-23 (box score).

For the second straight year, it was the T. J. DeFalco show for The Beach, as the 6-4 senior hitter was unstoppable. Last year, it was DeFalco's combination of hitting and digging that was crucial to Long Beach State's championship-match win over UCLA. This year, DeFalco's dig total in the title match was a modest 5. However, his hitting line in the box score, 20-4-31 (K-E-TA) for a .516 percentage, was scintillating.

As Vinnie Lopes noted over at Off the Block, DeFalco "became the second pin-hitter to have back-to-back NCAA Tournament matches with at least a .500 attack percentage during the 25-point rally scoring era."

As (or more) impressive to me than DeFalco's statistical line was the variety of locations from which he was scoring all those kills. I studied the video of the match** and attempted to note via diagrams of a volleyball court the physical locations of all of DeFalco's attack attempts (where he took off on his jump and the ball's trajectory and where it landed) .

The first graphic below shows the diagram for Games 1 and 2, and the second graphic, for Games 3 and 4. You can click on them to enlarge them. Before looking at the diagrams, however, here are some explanations of the symbols and notation: 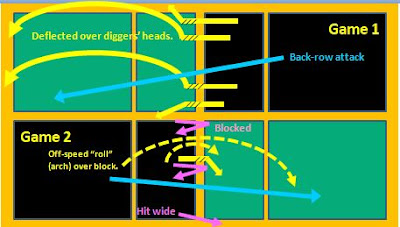 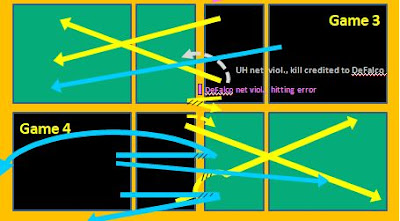 As you can see, DeFalco hit successfully from the left, the right, and the center; from the net and from behind the 3-meter (~10-foot) attack line. He drilled kills straight to the floor, and engineered deflections out of bounds to the side, to deep areas beyond the reach of the Warriors' back-row defenders, and back high over his own head, out of bounds beyond The Beach's baseline. He came up with a few off-speed "roll" shots (depicted with dashed lines) for a change of pace.

Hawai'i stuff-blocked DeFalco twice in Game 2 (half of the Rainbow Warriors' four blocks overall on the day), but couldn't shut down any more of his attacks the rest of the way. Via Off the Block, "Hawai’i in the loss had four blocks to tie the record for the fewest blocks in a NCAA Tournament finals during the 25-point rally scoring era."

The Warriors' Rado Parapunov started off looking like he might be able to match DeFalco kill for kill, putting up points on the first eight balls set to him. However, as shown in the following plot, Parapunov could not sustain this pace. 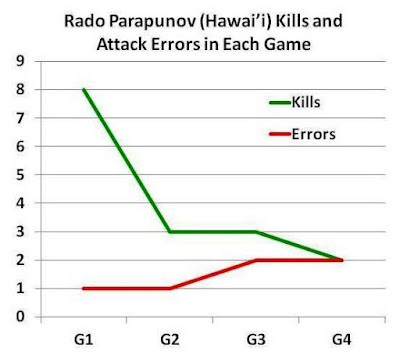 Hawai'i darted to a 5-0 lead in Game 3. but gave up a 7-2 Beach run to even the score. No team held any larger than a two-point lead for the rest of the game, with Long Beach State scoring the final three points after a 22-all tie -- culminating in a DeFalco left-side kill off the block -- to go up two games to one.

Game 4, finally, was close throughout. After Beach setter Josh Tuaniga recorded an ace serve to put his team up 20-18, the final 10 points of the match were all scored via side-out, leaving The Beach the winner of the game and match, 25-23. Down the stretch, the Tuaniga-to-DeFalco connection was running on all cylinders, with Long Beach State's final two points coming on kills by the latter.

The final match theme (previewed above) involved service errors. Again, per Off the Block, "This was the first time that both teams had at least 20 service errors in a NCAA Tournament finals during the 25-point rally scoring era." Note that, even though several previous NCAA men's finals went five games (2018, 2015, 2011, 2009, to name a few), no teams committed as many service errors as did Hawai'i and The Beach in four games.

With Hawai'i unable to block Long Beach State much at all, it makes sense for the Rainbow Warriors to have served aggressively in an attempt to derail The Beach's offense. However, The Beach had 12 blocks (triple the Warriors' total), so its service-error total is a little harder to understand.

This year's Long Beach State squad was a senior-laden outfit, including DeFalco, Tuaniga, and Kyle Ensing (who put up a 13-4-27, .333 hitting line). These players will be a tough act to follow. Hawai'i also loses some seniors, most notably setter Joe Worsley and hitter Stijn Van Tilburg. Whether one or both of these teams can return to the NCAA final in 2020 remains to be seen, but neither would enjoy a home-court advantage. Next year's host is George Mason University, in Virginia near Washington, DC.

*Typically, I would vary my usage between school name and nickname. However, in the case of Long Beach State, at the time of the NCAA volleyball final the school was in the process of dropping its long-time nickname of "49ers" and selecting the new one of "Sharks." I will not use either of these nicknames in the above posting, but will occasionally say "The Beach," a common reference to Long Beach State athletics.