This year's NCAA women's tournament, which gets underway Friday, features some of the "usual suspects" among the leading teams, but also some newcomers (click here for bracket). The usual suspects include No. 2 national seed Texas, No. 3 Stanford, No. 4 Wisconsin, and No. 5 Nebraska, whereas the upstarts include No. 1 Baylor and No. 6 Pittsburgh.

Baylor and Texas, the top two seeds, are both in the Big 12 conference, and they split their two matches this season. Baylor's October 23 loss in Austin was, in fact, the 25-1 Bears' only defeat of the season. Along with Baylor's November 20 win over Texas in Waco, the Bears also own an impressive victory over Wisconsin in Madison, although it was a long time ago (September 6).

On my longtime Conference-Adjusted Combined Offensive-Defensive (CACOD)metric, Baylor clocks in at 2.16 (.281 team hitting percentage divided by .156 hitting percentage allowed, with this ratio multiplied by 1.20, the adjustment factor for the Big 12). In the eight years I've calculated the CACOD, all the teams that won an NCAA title had at least a value of 1.91. Hence, Baylor's CACOD is consistent with a possible championship, but far from definitive in that regard.

Stanford, the defending national champion and runaway pick to repeat, suffered some surprising early-season losses, but finished well in Pac 12 conference play and ended up 24-4. The Cardinal's CACOD is 2.05 (.289/.176, times the Pac 12's adjustment factor of 1.25).

A towering figure for Stanford is 6-foot-6 senior outside hitter Kathryn Plummer, named by multiple sources the national player of the year in 2017 and 2018. Plummer has had an interesting 2019 season, interrupted by 10 missed matches (11 if you count one in which she had no hitting attempts and only served) due to what was consistently reported as an "undisclosed injury." The following graphic (on which you can click to enlarge) shows Plummer's total number of hitting attempts and hitting percentages in each of her matches. 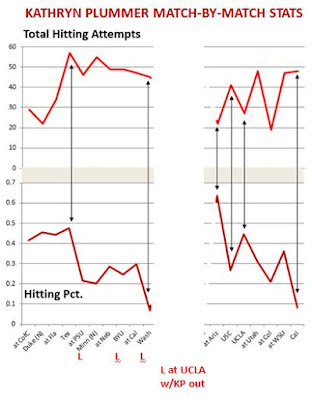 Plummer started out the season on fire, hitting above .400 in several matches, sometimes with huge numbers of hitting attempts. The Texas match epitomizes this trend, as she took a whopping 57 swings while still maintaining a .474 hitting percentage. Following the Texas match, she continued to take roughly 50 hitting attempts per match, but her hitting percentages went down (all the way to .067 on 45 attempts). At that point, she began her injury leave. I have no insider information on her injury, but one cannot help wonder if her high volume of hitting attempts had something to do with it. Upon Plummer's return, she recorded some of her best hitting percentages when her swings were reduced (e.g., .636 on 22 attempts at Arizona). It will be interesting to see what Plummer's workload will be in the tournament.

No. 4 Wisconsin also had an interesting season. After suffering four non-conference losses (one each to Marquette and Baylor, and two to Washington), the Badgers began steamrolling through the B1G. Wisconsin went into State College, Pennsylvania on November 29 with only a single blemish on its conference record (a bit of a shocker at Ohio State) and a chance to complete the impressive feat of sweeping two matches each from Minnesota, Nebraska, and Penn State. And it looked like the Badgers would do it, easily winning the first two games from the Nittany Lions, while hitting .640 and .395 as a team. However Wisconsin's hitting percentage plummeted to .000 (i.e., having as many hitting errors as kills) in each of Games 3 and 4, and rising only to .107 in Game 5. The result was a five-game loss to Penn State. The Badgers, with a CACOD of 1.85 (.294/.198, times the B1G adjustment of 1.25), still finished first in the conference with an 18-2 record.